Why does the F-117 Nighthawk look different than other stealth planes?

The F-117 Nighthawk has flat angled lines where most later designs (B2, F22, F35) have very smooth lines. Why the difference? Are the newer designs 'more stealth'? Do they use a different design to handle better? Is there another reason the distinct angled look is avoided in later designs?

The question, 'Why do many stealth aircraft have a similar shape and design?', is close, but doesn't really address why the F-117 stands out from the rest.

Initial work on Radar Cross Section (RCS) reduction concentrated on absorbers and had started in Germany late in WW II. The Americans were not interested at the time, but British scientists documented the results and gained early insights in US RCS research when they pooled their results in the 1970s.

Lockheed started work on the systematical reduction of RCS when they discovered the academic papers of Petr Ufimtsev, a Russian mathematician who explained how to calculate the reflection of radio waves from the 1960s on. Their initial success with RCS reduction on the SR-71 was more luck than systematic work. At the same time, similar insights were gained in Germany where a manned prototype of an aircraft (MBB Lampyridae) similar to the Have Blue prototype proceeded up to wind tunnel tests. Then the program came to the attention of US authorities which quickly put an end to it.

In all those cases, the major idea was to restrict the surface to large, flat panels because the edges, not the total area, determine how much energy is radiated back. In that respect, the German design was much cleaner than both the Have Blue and the F-117, but I digress. Those designs can be called first-generation stealth aircraft.

When Northrop joined the RCS work, they found that even curved panels work well - after all, it is edge reduction and alignment which reduces RCS most. Their initial prototype was for a battlefield observation aircraft (in contrast to the Lockheed attack aircraft) which was called Tacit Blue.

When work on stealth prototypes was opened at the end of the Cold War, all engineers could pool their knowledge and combine the work on absorbers, edge reduction and edge alignment. This gave rise to the second generation of stealth designs which look indeed quite different to those of the first generation. What also influenced the designs was more understanding of the tactical value of stealth, so the second generation designs do not optimize RCS above all else but arrive at a compromise which combines low frontal RCS with good agility and multi-role capabilities.

Koyovis is right, but it was not only computer power but also the limitations of early RCS codes which were based - at least in case of Lockheed - on the ideas of Petr Ufimtsev, and he in turn used analytical methods which did not allow to investigate the RCS of curved surfaces. However, the computers at the time were already powerful enough to allow the F-117 to fly at all - in contrast to the MBB design, it is unstable and uncontrollable without artificial stabilization.

The reason I had heard, and seems to be confirmed by this site, is that the computers at the time of design were not powerful enough to compute radar reflection off of curved surfaces. 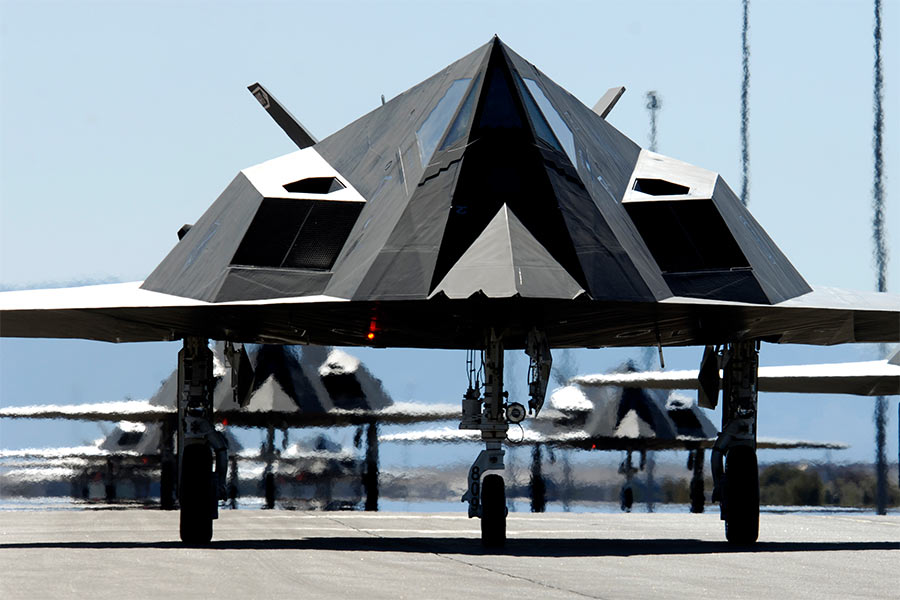 The photo is from the same site - it sure looks like something only a 70s computer could love. It most definitely makes aerodynamicists weep.

Not the answer you're looking for? Browse other questions tagged aircraft-design stealth f-117 or ask your own question.

4
Why is the F-117A the only plane to use the fully faceted design?
24
Do similar angles on a plane make it more stealthy?
11
Why do the F-22 and F-35 look similar to each other and different from previous designs?
7
Why do many stealth aircraft have a similar shape and design?
7
How does one develop artificial stabilization for aircraft uncontrollable without it?

15
Does the F-22 (or any other stealth aircraft) carry chaff?
59
How do friendly stealth planes locate each other?
25
Was the intended purpose of the F-117 Nighthawk originally a stealth-fighter?
8
Why do cruise missiles look different than subsonic jet aircraft?
9
How did a Soviet SA-3 missile manage to shoot down the F-117 Nighthawk?
7
Why do many stealth aircraft have a similar shape and design?
11
Why was the F-117 retired so quickly?