How do paraglider controls work?

I recently got into paragliding, but I am quite confused on how their controls work.

I am quite aware of how the control surfaces work on fixed-wing aircraft. Let's use for example an aileron. Lowering the aileron, increases the angle of attack of this wing, increasing lift, making the aircraft to roll.

On paragliders, things seem very confusing for me.

The control acts as a "brake". By pulling one brake there is an asymmetry in drag, causing the wing to yaw. Due to the yawing motion a difference in airspeed in the two sections of the wing causes a difference in lift, having as a side-effect the aircraft to roll too.

While one of the controls is pulled, the trailing edge gets lowered. This also lowers the aft-portion of the wing cord, increasing the angle of attack. I would expect that this would also increase the lift of this portion of the wing causing the to raise.

Thus pulling the right brake, makes the aircraft roll to the left.

For me, there seems to be nothing special with brakes. For example, in case of emergency (brake line failure), I can use the C-risers to alter the angle of attack of one part of the wing to turn. But then again the same paradox happens. I pull the right C-riser, the right wing has increased angle of attack, but still it dives!

How exactly do paraglider "brakes" work? What makes them behave as a brake, and not as an aileron?

I think the answers so far neglect the curvature of the paraglider sail. Changing the lift at the tips creates an imbalance of the side force caused by the downward pointing tips. This side force will pull the sail sideways and cause the sail-pilot combination to roll.

To illustrate my point, I shamelessly copied this picture and added vectors perpendicular to the sail surface, like this: 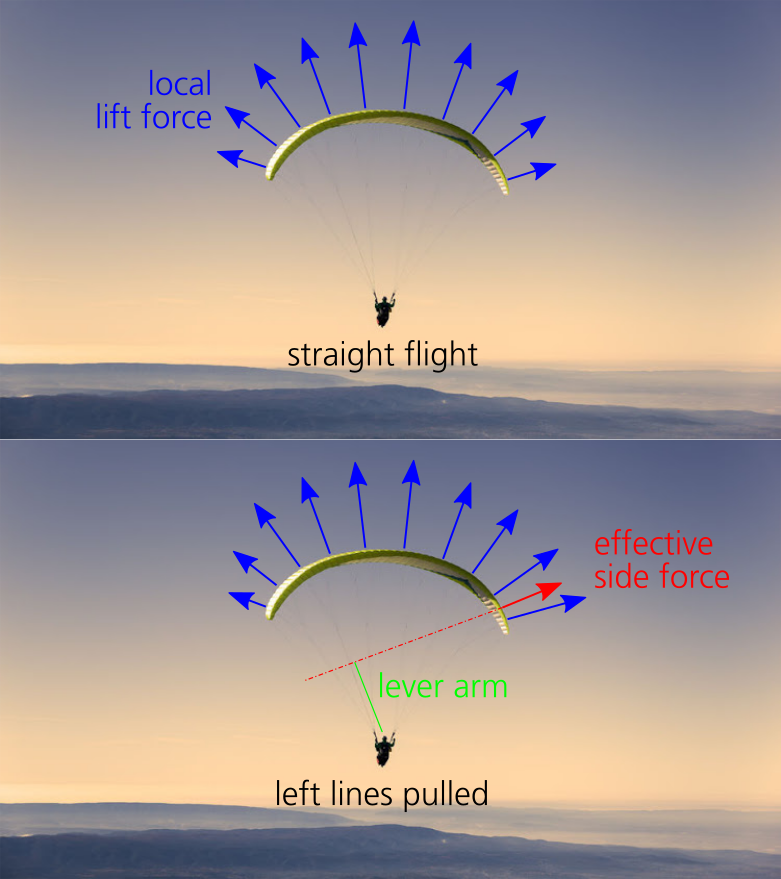 Now you will see why I used a photo: The tips of the sail are almost vertical so the side force caused by pulling the local trailing edge down has a sizeable lever arm with the center of gravity (which I assume to be near the pilot's head). @Ken's graphical representation hides this detail and fails to show the lever arm.

This side force will do two things:

Next, the increased drag on the pulled-down side will retard this part of the sail, adding a yawing moment and yawing rotation which will now stabilize the bank angle. The whole paraglider turns. With the banked paraglider the side force component of the lift force compensates the centrifugal acceleration (rotating system of reference) rsp. creates the centripetal acceleration (fixed system of reference) which keeps the yaw rotation alive.

Also here the rolling motion is started by a lateral shift of the lift vector, but the vertical component of lift counteracts the desired rolling motion. Only the lateral force, which dominates due to the inclination of the sail, is responsible for the rolling moment.

Exiting the turn is achieved by doing the same, only in reverse.

Therefore, any rotation is around the center of gravity. This does not need any hypothetical pendulum movement or "pendulum effect", which does not exist and is a fallacy anyways.

Oh, and one last word for the believers in the cult of the pendulum effect: I don't care that you downvote what you don't understand. Please try and argue logically and while observing the laws of physics. This, however, will involve the clear danger that you will lose your faith. Apologies for any loss of direction in your lives. That direction was wrong, anyway.

While one of the controls is pulled, the trailing edge gets lowered. This also lowers the aft-portion of the wing cord, increasing the angle of attack. I would expect that this would also increase the lift of this portion of the wing causing the to raise.

But with the lift also the drag raises. This causes the parachute to turn into the direction where the control is pulled.

Since the pilots body does not want to turn (yet) it "swings" out in the former direction forcing the other side of the parachute to raise over the side to turn to despite the lift is less here...

Yes, but it is outweighed by the force of the pilots "swinging body" into the other direction. This is because while "swinging out" the pilots weight drags more on the inner "wing" (where the turn is heading to) and the "outer wing" the parachute is less supporting, therefore the ratio of supported weight to lift gets better then on the "outer wing". 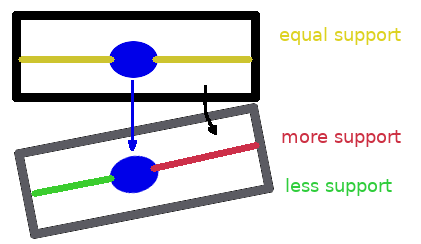 Also why is this not experienced in other aircraft with conventional ailerons? What is different in paragliders? – user3634713

A convertional aircraft has its "reference point" (where all the forces virtually impact) is at most at the same level (in height) where the wings are mounted. Therefore "swing effects" do not matter that much.

A para gliders "reference point" is more than one wingspan below the "wing level".

I've also recently started paragliding, and with some background in aerodynamics have convinced myself that the reason paragliders experience this counter-intuitive reaction (right turn from what would be called a left aileron deflection), is that the direction of the lift change is radial from the total vehicle CG, which is about at the pilots chest. Expanding on some of the comments above, imagine the lifting surface as an arc of constant distance from the CG (I realize that's not completely true, especially for high performance gliders, but it's close), with outward lift components distributed throughout its span, aligned radially from the CG. If you increase the magnitude of the lift components on the right side, due to right trailing edge pulled down by a right brake input, they still are pointing directly away from the pilot/CG, so they apply NO NET ROLL MOMENT relative to the CG. The lift components of an airplane wing are essentially tangential, i.e. normal to their arm from the CG, so in addition to generating lift due to right aileron down deflection, they also generate a lot of left roll moment. The attached cartoon shows why the primary aileron roll effect on a conventional aircraft is negligible on a paraglider, leaving the drag/yaw effect to do most of the work. The yaw moment yaws the glider to the right, which develops left sideslip. This sideslip causes a right force on the wing, which now has a long arm above the CG, and rolls the glider to the right, beginning our pendulum-style turn. 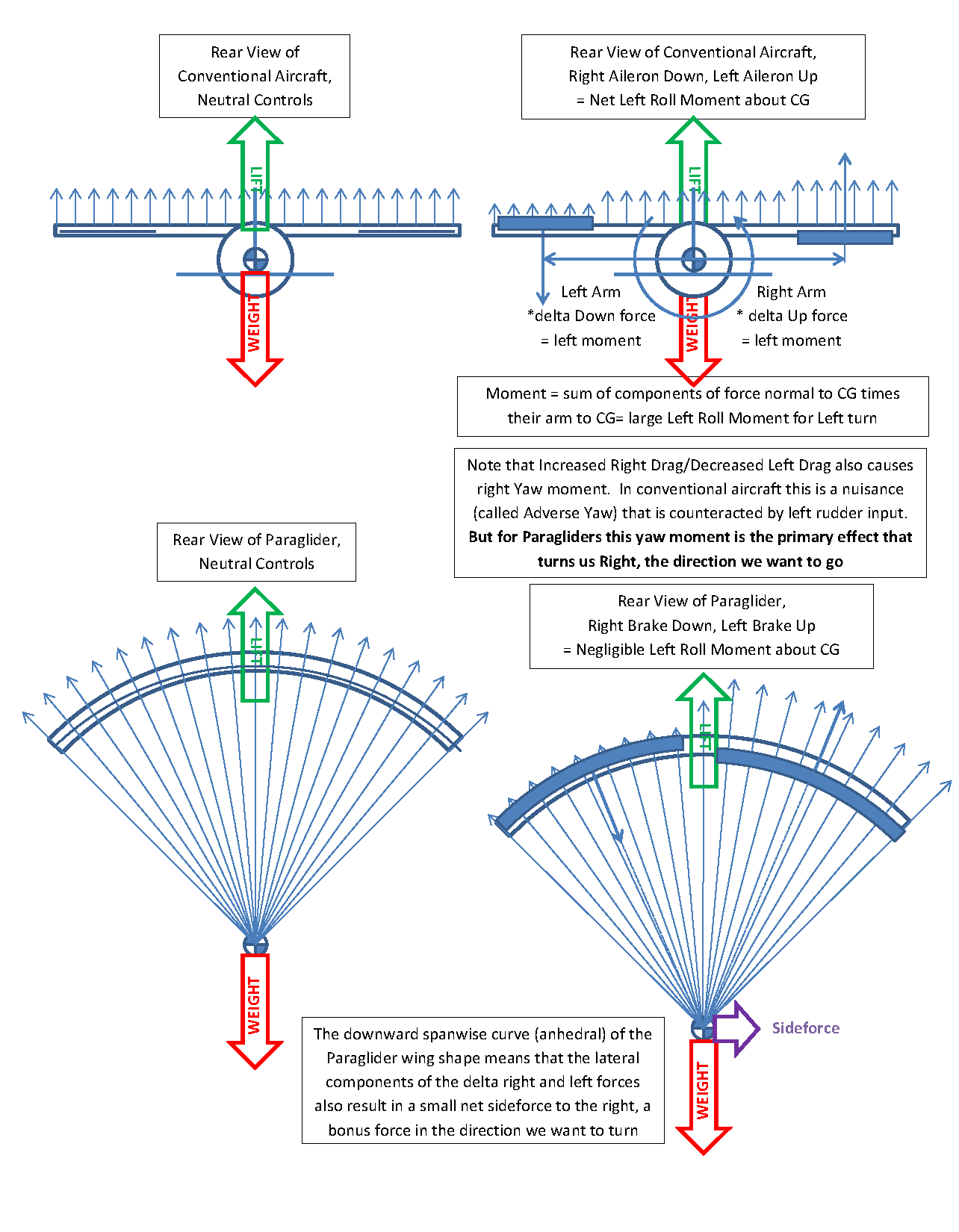 I think by pulling down gently on one side the pilot affects a chain of behaviors that cause the turn.

1- pulling the brake on one side, say right side, causes reduction in lift on that side even thought it adds to angle of attak, for it forces that side to function more like a parachute then a wing, with immediate increase in drag and more importantly loweres the same side giving better unbalance lift to the other side.

2- Then because of the extra lift on the left side it swings the pilot up and to the left causing the whole parachute to bank left and turn.

Anybody who has had a heavy bike knows that if you want to turn left you push the left side of the handle forward, or pull right side in, totally counter intuitive.

Not the answer you're looking for? Browse other questions tagged aerodynamics paraglider or ask your own question.

9
Why do the ailerons of this flying wing work oppositely compared to those of an airplane?
8
Does “pendulum effect” apply to hang gliders or any aircraft?
12
Can anyone explain the reflex wings used in powered paragliding?
2
How does the “pendulum effect” affect biplanes?
5
When a paraglider pilot applies brake on one side and maintains the brake pressure, why does the roll rate eventually come to zero?
1
Forces “felt” by pilot, G-meter, inclinometer--are they the aerodynamic forces generated by the aircraft, or the sum of weight+centrifugal force?
0
What are the equations of motions for parafoils?

15
How does the dihedral angle work?
2
How to calculate aileron deflection for achieving similar roll dynamics at thin and dense air?
5
Why the need to use right rudder during stall recovery?
18
How do elevons work to roll a flying wing?
6
Why does the A320’s maximum allowable aileron deflection decrease, rather than increase, when the flaps are extended?
2
How does the engine produce aerodynamic lift at high angle of attack?
8
Just how do the underbanking and overbanking tendencies work?
2
Do twin engine airplanes have increased roll stability?
1
What differentiates the entry procedures for spins and snap rolls?