Why are winches not used for towing commercial planes up?

In this video a glider is pulled up by a winch on the ground, like this: 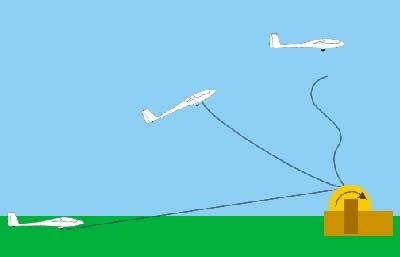 I would say you could apply the same principles with bigger planes, possibly even using sustainable energy sources.

The plane would not use its engines at all to get to cruising attitude (unlike a suggested catapult in a previous post), so this part of the flight would be "for free". Using a back of the envelope type of calculation with 5% efficiency it takes 17000 litres of kerosine to lift a 747 to 10km (which agrees with this paper).

However, this would however cost at least (calculated below) 25km of towing line(s). If we use a UHMWPE fiber a 400g/m and 1.2 cm radius cable would be able to support 2x the 400kN thrust maximum output of a typical airliner.

Sure there are a lot of hurdles to overcome, but since some airports in cities cannot expand because of noise problems this seems like one solution.

Logistically this seems like a large extra challenge for the crew on the ground, but would this be possible?

If you ever get the chance, do try a winch start in a glider. It is, to say the least, an interesting experience. I do not believe it would be accepted by the general public.

So, that is one more reason, it would scare the paying passengers.

I won't prove it's not possible, but I'd would be surprised it is. I'll develop the reasons why and provide the physical framework you can use to compute a solution to have, with some effort, a final answer.

The glider case cannot be scaled up to an airliner

It works with a glider for two reasons:

Description of the problem 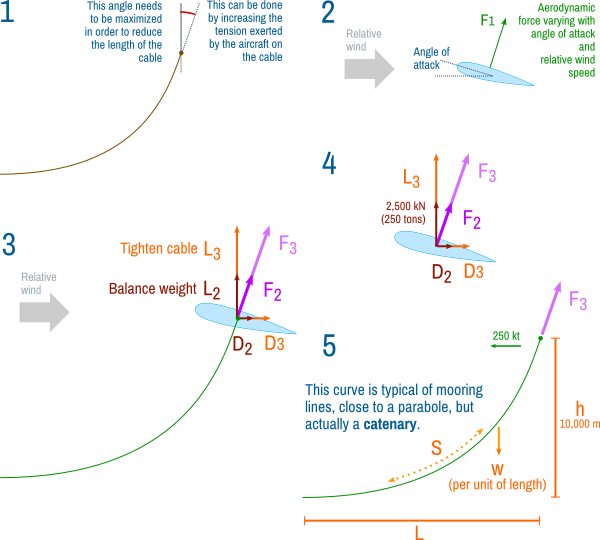 The cable curve will be a catenary, actual calculations by an engineer should prove the solution isn't possible with the material we have today (including a good candidate, Dyneema used by tug boats).

Those interested may also try the Kite Modeler Java applet from Nasa, as in this configuration the airplane is mostly a kite:

Sure there are a lot of hurdles to overcome.

Plenty. I've said it before, engineering fixes problems, not create ones.

But all the hurdles really don't matter. Gliders don't use winches because of limited runway, they use it because they don't have engines, so the comparison stops there.

And thus, there is no issue with commercial aircraft (jets and turboprops), they have a lot of power and already operate from short runways.

A city in close proximity to a small airport will not be happy when a stupendously heavy cable is released from the launched aircraft and falls on it. If there is an area for the drop, then surely there's an area for a longer runway and an area for a lower climb power setting.

(I hesitated to write this answer because I couldn't find official sources, but in the end I decided to do it; the source is that I flew gliders, instructed, and dealt with their maintenance for many years)

Something not mentioned in the other answers is the stress on the airframe. A glider that is winched regularly has a reduced lifespan. Like I said above, I don't have concrete sources, but I do remember being involved in the extension of the end-of-life of a Blanik, and to determine how many hours were allowed; the manufacturer considered regular winch launches on the same level as regular aerobatics (that is, as something that substantially reduced the life span of the airframe).

In addition to the other excellent answers, two more strikes against cable launch in the commercial aviation industry:

First, an aircraft will always have full power upon launch whether cable launched or not. This is to give the widest possible safety margin in case a problem comes up.

Lastly, the cable and its attachments must be necessarily heavy since they will be slamming into the ground or perhaps a plate designed to absorb such impact when released. However not all releases will be ideal, and if the cable or its attachment hits the runway it will be compromised, potentially halting all traffic on that runway for many hours.

All these things can be handled, but are additional factors that would prevent an airline and airport from adopting such a system.

However, there's an additional positive offset:

Takeoff uses a significant amount of fuel. If the takeoff can be energized from a ground power source, particularly where electricity is cheap, you may be able to offset some fuel and its associated costs for each flight, which could result in a significant savings over industry flights.

This would also reduce (or at least relocate) carbon emissions.

As a glider pilot who mainly uses winch launching and also a professional engineer I can see both sides of the issue.

You can solve the launch issues by throwing engineers and money at the problem but there is a glaring issue that does not seem to have been covered: cable breaks.

Despite having over engineered cables and linkages, cable breaks do occur, I have had a couple and they can be sphincter-clenching moments but we train for them and we survive. We survive them mostly because we are flying gliders, aircraft that are specifically designed to be flown without power.

A break at low level and I just land beyond the winch, this would need a massively long runway with the winch partway up, a mid level break and I turn and do a cross-field landing which is easy as my airfield is very wide but a commercial airport has fairly narrow runways. A higher level break and do a quick circuit of the field and land normally. An airliner is not a glider and so the land ahead is possible but the circuit and land normally would not be possible due to the glide characteristics of an airliner. A cross field landing would require a square runway which is massively expensive.

...and then you have the problem after a successful cable release of several tons of cable dropping to the ground. In gliding this is done by means of a parachute under tension from the winch. In the event of a winch failure at cable release then you need to have a clear area all around the winch the same diameter as the release height in case the cable drop onto something or someone. Unlike gliding this cable will be very very heavy.

Cables are heavy, let's do railguns

Essentially gliders are light and only need to be pulled to a modest height, an airliner is vast and you could only hope to save a fraction of the takeoff energy. The plane couldn't be made smaller unless it only took off from such places. And the cable to pull an airliner would be incredibly heavy, and you'd only get 3km or so (the length of the runway) to use unless you think airports always have space beyond the runways.

A railgun, though, would be more fun.

Imagine we accelerate at 1g (total force on the passengers is then 1.4g) for 3km (reasonable international airport runway). v^2=u^2+2as -> final v=240 m/s or 540 mph which is pretty close to cruising speed. So we don't need even a 3km runway for this, or we could accelerate more gently.

There is a hitch - we're still on the ground. So in fact the best thing is to assist the aircraft to a takeoff velocity (v2) and let the rest of the takeoff proceed as normal.

If that's so clever, why isn't it being done?

It is in development. The EM Assisted Launch System for the US Navy, to replace catapult launch from carriers.

But, as this answer explains, the proportion of an airliner's energy used to take off is a small fraction of the total energy used, so you are likely to lose any benefits in additional weight from implementing such a thing.

A fairly obvious point that seems to have been missed in the other answers: how fast can you cycle the winch? A busy airport might have planes departing every couple of minutes. To get to cruise altitude, your winch has to reel in a considerable length of cable. This then has to fall to the ground after the aircraft releases it, which takes a minute or two at best, more if it has a parachute. Then a ground crew has to grab the end of the cable, reel it back to the departure end of the runway (which requires a vehicle), and attach it to the next plane. Say you can do all that in a really optimistic 10 minutes: that means you've cut your airport's peak departure capacity to 20%.

Then you have the cost of all this infrastructure, plus you have to duplicate it so you can take off in either direction. And that's not even getting into what you might do for intersecting runways (or even parallel ones), or how the cables might affect landing traffic...

I believe it is a good idea, and that it will happen eventually, but not anytime soon though. With the airplanes we have now it is simply not worth it economically. We say that bringing extra fuel on a plane is very expensive. It is expensive because, if you bring extra fuel to extend your range, you need to get it in the air, and then carry it the whole way until you need it. It is not the price of the fuel that is expensive, it is having to carry it until you need it that is expensive. The fuel for take-off and climbing is used right away, so it is not expensive at all. The electricity bill for the winch would probably cost almost as much as the fuel you are saving.

The system seems perfectly feasible though. If it works on a small scale, for fighter jets and gliders, then why would it not work on a larger scale? I believe air traffic will slowly start to move towards electrically powered planes within the next few decades. For electric planes, a ground assisted take-off would be much more beneficial, or even essential. A winch could take the plane to above the clouds, and there it can fly to it's destination on solar power. If it had to get there itself, it would need huge battery packs.

Not the answer you're looking for? Browse other questions tagged airliner takeoff glider efficiency noise or ask your own question.

50
Could airliners use a steam or electric powered catapult for take-off?
25
Is there a maximum lift to drag ratio?
13
How do airports charge airlines for using their gates?

11
Why is thrust vectoring not used on commercial jets?
15
Can a commercial airliner be used for military purposes?
8
Is there anything wrong with this more symmetric aircraft design, and why isn't it used?
17
Why is max endurance different for jet and props?
18
When a typical commercial airliner flies overhead, what is the actual noise we are hearing?
8
Why are parking brakes not used for parking jetliners?
3
Why are helicopters less efficient than planes?
12
What is the most 'environmentally friendly' way to learn to fly?
13
Why are birdlike airfoils not used?