Is « Shepherd One » really used internationally by air traffic control for Pope's flight?

The President flies on Air Force One. The Pope flies on "Shepherd One." That's the Federal Aviation-approved call sign for the Boeing 777 in which he'll be traveling around the United States, according to an official from American Airlines, which will be operating the plane.

Shepherd One is the international call sign of any aircraft carrying the pope onboard. The airline which is used for such transportation is usually Alitalia

The plane isn’t really called “Shepherd One.” People in the United States call it that, but the phrase is a media conceit rather than an actual call sign.

Did you know it’s Americans who baptized the plane carrying the Pope ‘Shepherd One’? Well, their very own presidential jet is called ‘Air Force One’ so they thought since the Pope is a shepherd leading the Catholic Church, his plane should be called ‘Shepherd One’.

Question: Does ATC around the world, starting with Italy and the US, uses the specific call sign Shepherd One? 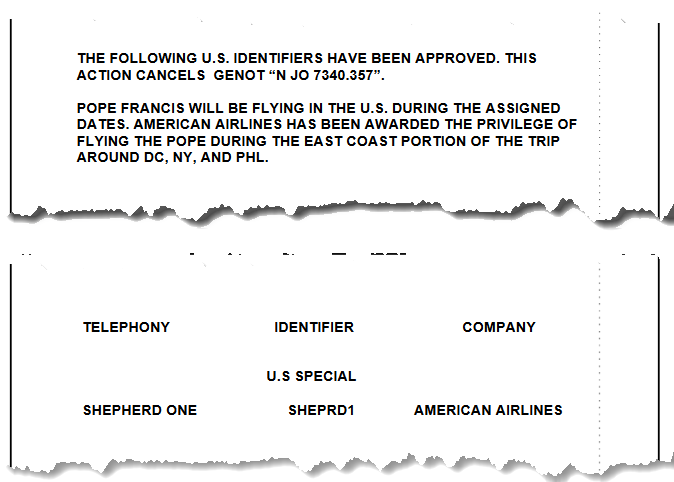 The order it cancels (.pdf here) had the bottom row filled out wrong (SHEPRD1 and "SHEPHERD ONE" were transposed, and "SHEPHERD" was typoed).

So it's not a permanent reserved identifier in the US; but it might be recurring.

Wikipedia claims here (and here) that in Italy the Papal flights are named "Volo Papale ###", where the ### is a serial number (seemingly the number of times this Pope has flown). I'll admit that I haven't been able to find anything akin to faa.gov for Italy, France, Australia, or the UK which would corroborate either "Volo Papale" or "Shepherd One".

Typically, the Pope flies on a chartered Alitalia Jet. The Pope's flight is often nicknamed "Shepherd One" by the press, while the actual callsign is "Volo Papale" (papal flight, in Italian) followed by a serial number.

Not the answer you're looking for? Browse other questions tagged air-traffic-control airline-operations head-of-state-transport or ask your own question.

10
Who runs the Air Navigation System (air traffic control) in Canada?
8
Where can I find Air Traffic Control information material suitable for beginners and students?
11
Do any other nations have an equivalent of the "Air Force One" call sign?
6
How universal are air traffic control systems, training and practices?
0
What purpose does a control area really serve related to managing air traffic flow?
8
What bandwidth and availability is required for modern air traffic control?