Is there an FMC not connected to the AP/FD?

Is it possible to have an FMC to compute the performance and navigation without having it linked to an autopilot or flight director?

By definition an FMC/FMS is linked to (or even encompasses) the auto flight system.

This goes back to its inception:

The prime function of the flight management system is to collect information from the airplane and navigation systems and provide guidance in the forms of system status and commands to the pilot, the autothrottle, and the autopilot.

— CREEDON, J. "Flight management systems-What are they and why are they being developed?." Guidance and Control Conference. 1973. https://ntrs.nasa.gov/citations/19830060494 [emphasis added]

The closest thing to what you're after is an Electronic Flight Bag (EFB).

Even the PMS (Performance Management System) that preceded the FMS in its development was connected to the AP (think of it as an early VNAV-only computer):

A PMS is basically a performance data computer that has been coupled to the airplane autopilot and/or autothrottle systems. [Ibid.]

Since the mid-1970s, when Sperry began developing the first true Flight Management Computer System, the term "FMCS" has been misrepresented almost as frequently as it has been misunderstood. True flight management, defined by the Sperry FMCS, integrates navigation, flight guidance and aircraft performance functions through a sophisticated computer. And in today's marketplace, the "fully-compliant system" which performs exactly as specified by its user in all modes is defined only by the Sperry FMCS.

Sperry's definition of a "true" flight management includes guidance. And earlier from 1981:

Arma boasts the first certificated airliner FMS, which is in service with the TriStars of British Airways, Delta, Gulf Air, Pan Am and Saudia. Racal-Decca Navigator is involved on the software side, and also in the support of units outside the USA. The navigation component of the FMS was derived from the earlier Mona TriStar navigation system.

That FMS aboard the Lockheed TriStar was connected to the engines and autopilot, so let's check the mentioned Mona TriStar navigation system from c. 1973:

Mona is not actually a navigation system, in the sense that it does not contain any sensor equipment. Described by its designers as an automated navigation-management package, it can readily be installed in an aircraft to serve as a direct, executive link. It is capable of processing information from the existing airborne navigation system and translating the results into the autopilot and flight director signals needed to maintain en route track, height and speed.

Even that sent AP/FD commands. 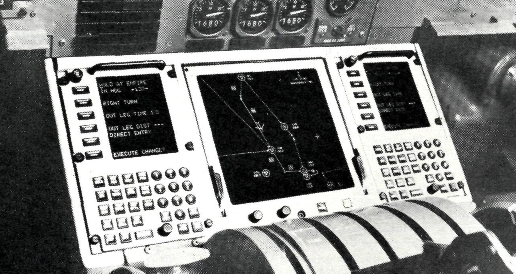 (Links to flightglobal.com's historical archive are down due to prolonged maintenance.)

Not the answer you're looking for? Browse other questions tagged avionics autopilot fms or ask your own question.

20
What means of navigation did commercial Soviet airplanes use in the 50s-90s?
6
What's the difference between FMS and FMC?

39
What is a "Flight Director"?
5
Is it possible to disengage only one axis of a two-axis autopilot?
7
Can crews hand-fly an RNP AR approach in IMC?
6
What's the difference between FMS and FMC?
7
What is the relationship between "automatic flight control system AFCS", "autopilot", "flight director" and "flight management system FMS"?
3
How do the VNAV and LNAV work on the 737NG?
4
Is it possible to totally override the flight computer on the Airbus A320-family (in simple non-technical terms)?
20
Why does the autopilot disengage even when it does not receive pilot input?
2
Are the terms "FMGS" and "MCDU" just Airbus-terms, or are there technical reasons behind the terminology?