Why did my business class seat have a three point shoulder harness?

I recently rode a short haul international flight on Asiana Airlines AAR111 from KIX to ICN. I was surprised that my business class seat had a three-point shoulder harness given that we’ve discussed many times on this SE why shoulder harnesses aren’t provided to customers.

Interestingly, on the flight back I flew Korean on the same route and KAL [business class] seats don’t have three points, only standard seat belts.

Is there a reason AAR111’s business class has three point harnesses? Why just that plane and not similarly configured other flights? 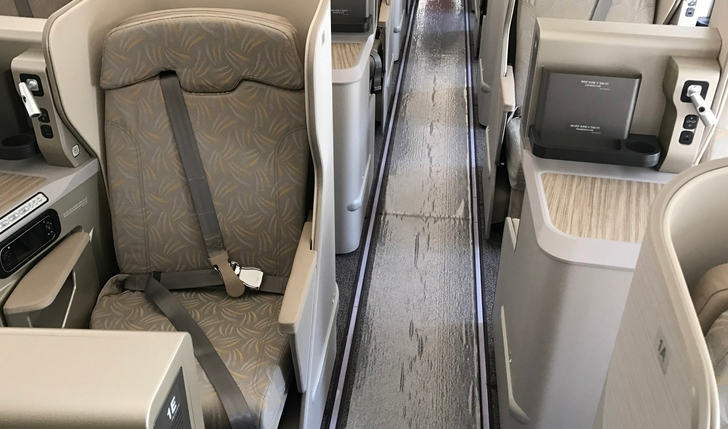 On the same plane the economy seats don't have that shoulder strap. It's not new either. There are various reasons:

[Qantas will] offer the world’s first seats that let passengers recline in their seat from take-off through to landing. Key to the break-through product’s safety is an over-the-shoulder belt.

(...) the three point seat restraint is used in the larger premium class seat, because there is no seat back close enough to the traveler to cushion his/her head in a sudden stop.

On the return flight aboard Korean, based on flightaware it was probably a 777-300ER or a 747-8. The missing shoulder strap could be because the seats are forward facing on both types, and/or Korean wasn't interested in the option to recline during takeoff/landing.

* Allows, but not necessarily allowed by the airline, i.e., some airlines may still insist on the upright position for the takeoff/landing.

I also found this supporting text:

9.20.3 Three-point Seatbelts
Three-point diagonal fixing seatbelts are occasionally installed in premium seats, including those positioned at an angle away from the forward/aft axis of the aircraft. The intent of the three-point harness is to protect the occupant from contact with the forward side of the seat shell.

It's always a regulation. If there is any safety equipment on an aircraft, a reg put it there. In this case it is FAR 25.562 Amendment 25-64, the 16g seat impact requirement.

This reg included a "head strike envelope" provision that manufacturers say is so complex that it was impossible to satisfy. This was with a lap belt only. The FAA "relented" by allowing addition of a shoulder belt as a substitute level of protection, that did not need all the time consuming testing.

You would have to believe the manufacturers were telling the truth, because they will do almost anything to keep weight out of the airplane.

Not the answer you're looking for? Browse other questions tagged safety airliner seats or ask your own question.

8
Why are passengers not given the option of shoulder harnesses?
6
Reclined seats for take off and landing
0
Why are airline seat belts lap-only?
1
Why don't plane seats have shoulder straps?

36
Why are First/Business Class seats at the front of aircraft where it is the least safe?
17
Why do airline pilots have shoulder harnesses?
18
Why do some 2 seat fighters have side by side seating, while others have the pilots inline with each other?
8
Why do you have to keep your seat belt fastened after landing?
4
Why did this pilot have his single-engine license revoked?