Could a pilot navigate using distances and radials from an RNAV waypoint, similar to VOR navigation?

I know that typically RNAV navigation involves a list of waypoints, and the aircraft simply flies from one point to the next. What I'm curious about is if a procedure could be developed (as a special engine out procedure, for example) that would be something like

Would the instruments in an RNAV equipped aircraft allow a procedure like that to be flown? Would it require a certain system (say only from a certain manufacturer), or require additional systems (like an FMS)?

CLARIFICATION FROM COMMENTS: I understand that a procedure like the one above would not be typical or preferred, but in very hazardous terrain (for example) with no real other options, would the pilot simply have the tools available to be able to fly it?

If it matters, I'm particularly interested in commercial aviation and answers that would be applicable to any airport worldwide.

In a modern B737 (NG/MAX) (and probably most other comparable aircraft), this is trivial. The simplest (and most realistic option for an emergency turn procedure) would be to fly the procedure in HDG SEL:

One of the aircraft that I fly has dual Avidyne IFD540 GPS units onboard. I can select any waypoint that is in my database and treat the waypoint as though it were a VOR in-so-much-as I can set the GPS in OBS mode and then manually select any "radial" to track to or from that waypoint no different than if it were an actual VFR.

I believe that the Garmin units can do the same thing.

Once I have this dialed in, the autopilot will follow the "radial" that I have selected no different than a VOR.

Ultimately, while not something that one would normally do, with modern navigation equipment, it can be done.

Not only is this possible, but some RNAV procedures (such as the JFK DEEZZ5) require it. 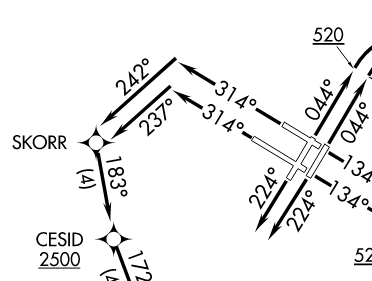 Not the answer you're looking for? Browse other questions tagged navigation ifr-navigation vor or ask your own question.

1
How can I calculate a flightpath given a set of waypoints?
7
Why do we need DME or RNAV when using VOR navigation above FL240?
5
Why is there a GPS/RNAV waypoint co-located with a VOR?
5
What is "picture flying" and does the FAA define it?
1
Calculating distance from VOR station with radial and heading
1
How to accurately determine Navigation Accuracy from FAA's PBN Criteria (Order 8260.58A)?
2
Is it allowed and possible to hold at the intersection of two VOR radials using a single VOR receiver?
4
If I have a VOR receiver and a GPS, which should I use to navigate VOR airways?
3
How do you calculate the deviation from an RNAV waypoint radial?
0
Flying an RNAV SID with instructions to intercept a course to a waypoint