Why do all airliners have life jackets?

According to this question, life jackets are not mandatory in planes that do not fly over large bodies of water. However, I have never been on an airline flight without life jackets (and the corresponding safety demonstration).

Why do airlines not remove the life jackets from planes that fly over land? The plane would be lighter and the safety demonstration shorter. Moreover, it can not be hard to dedicate different planes to different routes and avoid returning the life jackets each time the plane has to fly over water.

The plane would be lighter.

It cannot be hard to dedicate different planes to different routes.

This adds to the logistics difficulties in scheduling the airframes. It's MUCH easier if all the airframes can be used on all the routes.

Returning the life jackets each time the plane has to fly over water.

This involves extra down-time/logistics before the airframe can fly the next trip.

You've used the phrase, "large bodies of water"; think about if the airplane needed to ditch in a "small body of water". It would be preferrable that all people had life jackets and thus a chance to live.

Why do airlines not remove the life jackets from planes that fly over land?

They do, at least some of them. I fly on intra-European routes regularly (mainly Eurowings) and have never seen life jackets on flights that don't cross the Mediterranean. Obviously, the safety instructions don't include the life jacket demonstration either.

I would guess that especially for low-cost carriers, the weight advantage makes a difference.

Because this can still happen. 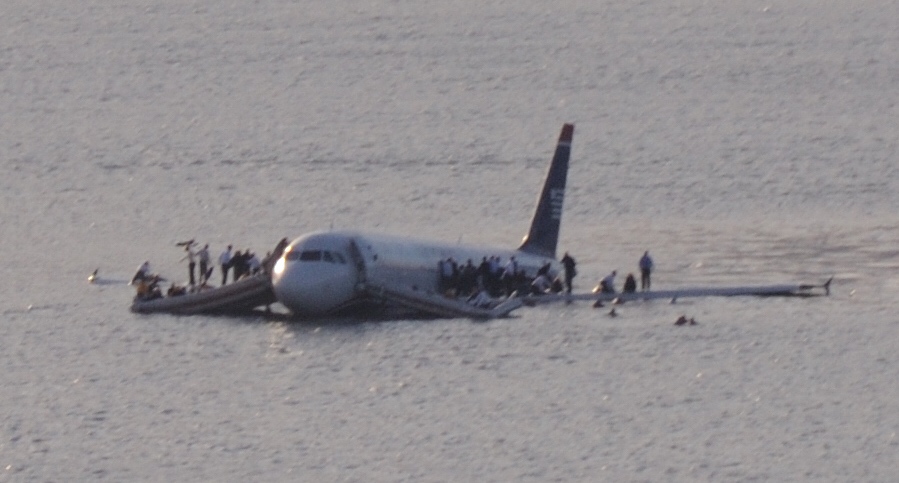 That’s US Airways Flight 1549 on the Hudson River. They made a movie about it starring Tom Hanks.

There’s no way to predict disasters, and had the plane been “efficient” having no life jackets, I suspect it could have meant a lot of people drowning. [But see comments.]

So it’s better to plan for contingencies, especially when it’s a cheap solution (Like life jackets or floating seats). In other words, planning for anything and everything going wrong is just something pilots and aerospace engineers (and lawyers) are in the habit of doing, ideally.

Why do airlines not remove the life jackets from planes that fly over land? The plane would be lighter and the safety demonstration shorter.

Some do. As a specific example, if you fly Delta from Minneapolis to Lincoln, Nebraska, you'll be on a Canadair RJ-something (actually run by Sky West) that will only have a couple of infant lifejackets on board. Everyone else can use their seat bottom cushion to help float – there are straps on the bottom to help you hold onto it.

However, it only makes sense to do this on planes that won't be used over any significant body of water. For example, the lack of lifejackets prevents Sky West using those particular planes for something like a Minneapolis–Detroit flight, which would either pass over Lake Michigan or take an uncompetitive detour to the south. They probably couldn't be used on Minneapolis–Chicago flights, even, since those can be routed out over the lake to approach O'Hare from the east. Similarly, a European carrier that decided not to carry lifejackets would be unable to fly that plane to the UK without spending the time to put the lifejackets back and replace all the safety cards.

The Airbus A380 seats around 850 passengers 4. American Airlines has a fleet of about 950 aircraft of various models 2. The Cadillac of Wal-mart life-vests, purchased individually, costs \$30 1. Outfitting a fleet of 950 A380s with life-vests purchased individually at Wal-mart comes in a $24,225,000 USD. Even though I outfitted one of the largest fleets consisting of the largest aircraft with the life vests purchased using idiotically low business-sense, if I managed the rest of the business with some sense then the cost is (optimistically) about a day's worth of profits (American Airlines had a net profit of \$7.6B in 2015, though 2016 was a little slower at \$2.7B 3) for a once-in-an-aircraft's-liftime purchase (though there's no reason to retire them with the aircraft).

Regardless, your question was "why", not "why not"; what incentives are there for doing having life vests? One possible incentive for airliners to go ahead and equip all aircraft with them is to take out any restrictions on the aircraft's serviceable zone that would be in-place if not equipped with life vests. Maybe airports such as New York require life vests because it's so close to a large body of water that traveling over it is practically unavoidable? Maybe it's economically advantageous to be able to re-route aircraft without the luxury of predictability.

Still I apologize I still have not fed you with any true answers, only supposition. Maybe there is a regulation...Otherwise, maybe the CEO of American Airlines will respond and tell us why the hell he blankets the life vests.

Mins raised a point about cost of maintenance being a significant cost (possibly larger than the cost to supply). So maybe the there isn't much strength in the "why not" court.

Not the answer you're looking for? Browse other questions tagged safety commercial-aviation economics weight or ask your own question.

10
Are life jackets mandatory on planes that will never fly over water bodies?

8
Can a commerical jet fly into a tropical cyclone?
16
Why don't airlines provide smoke hoods?
16
How can civil ATC maintain safety with military aircraft around?
9
Is there any regulation to ensure that life jackets and safety cards are on-board?
51
Why don't commercial passenger safety videos ever explain policy instead of merely dictating it?
13
Why do narrowbodies have longer life than widebodies?
5
How do airplane "life jackets" compare to marine life jackets?
17
Why don’t airliners have temporary liveries?
7
How to safely handle AVGAS (100LL)?