Ask Question
Asked 8 years ago
Active 8 years ago
Viewed 687 times
1
$\begingroup$
Closed. This question is opinion-based. It is not currently accepting answers.

What would be the most optimal shape for a quadcopter design? I have tried the cross beam design, but the center joint, though epoxied, is extremely prone to shearing off on impact.

There's really no "optimal design" for a quadracopter - there are many good designs, each of which is a compromise between several factors like endurance, performance, flight handling characteristics, and durability.

Your question seems to imply that you want something that's geared toward durability (and probably beginner-friendly flight handling characteristics) since you seem to be worried about things "shearing off on impact", and I'm going to break this to you as gently as I can: No aircraft is designed to crash.
Some designs are better at crashing than others -- in manned aircraft that means they're designed to let the occupants walk away, and in unmanned aircraft it means they're designed for you to put the pieces back together as quickly as possible.

The cross-beam design isn't really built for durability. It's the sport model - light, fast, maneuverable, and often just a little bit unsafe.
You can improve its crashworthiness by designing it to break apart on impact (i.e. rather than trying to beef up the center hub build it so the beams can detach and be easily reattached). This will hopefully reduce the work you have to do after a crash.

As an alternate design though, consider something like the one pictured below: 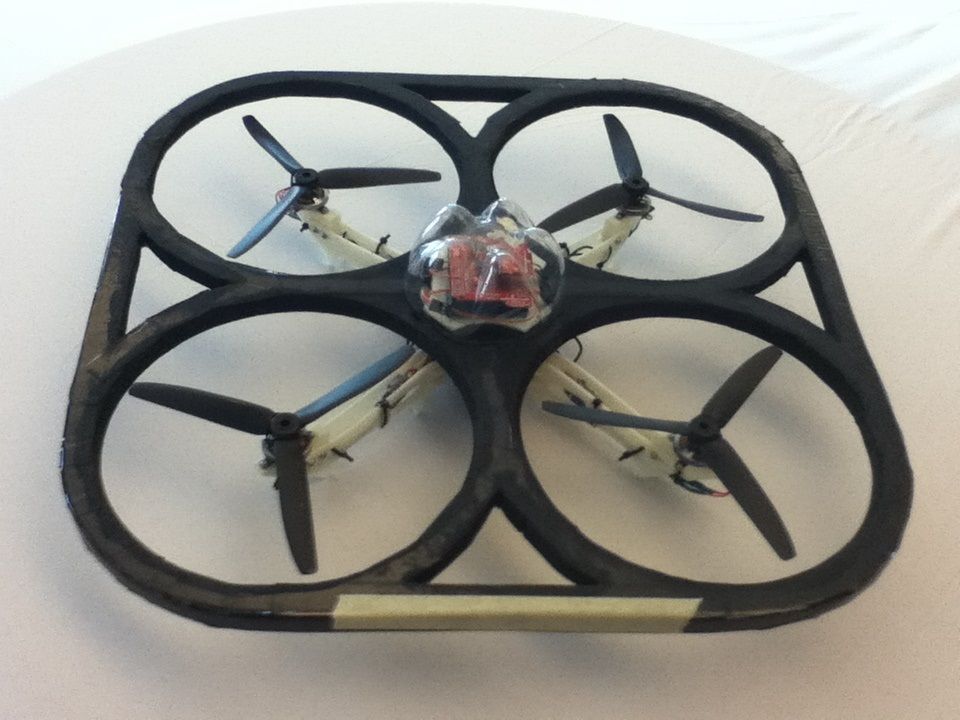 These full-frame quadracopters are the kind you'll often find at mall kiosks (made out of styrofoam). They're great for beginners because the frame design braces itself and can take substantially more abuse than simple cross-beam designs.
The design also inherently protects the propeller blades from whacking into things when you lose control (and innocent bystanders from whacking into the propeller blades) which is a nice bonus.

This particular example has the motors mounted on a modified cross-beam structure under the copter, but designs where the mounting comes from above & an undercarriage is provided for landing are also out there in the wild. Another option is a frame thick enough that your propeller/motor attachments can come out of the middle of the frame, protecting them further.

From what I understand, you want stability and good crash-worthiness.

voretaq7 did a great job covering crash worthiness in my opinion, in addition to protecting the propellers from impact, properly designed shrouds can actually improve the performance of your aircraft as well.

The trick to any crash is to dissipate as much energy as possible. One way, as vortaq mentioned is by designing the copter to break apart. Another way is to absorb the fall with purpose-built mechanisms that absorb energy. These mechanisms are generally refered to as suspensions in cars and motorcycles. A suspension consists of a spring mechanism, and a dampening mechanism. The simple description is that you need a spring to absorb the impact, and a dampener to keep it from bouncing back up. Here are some examples:

3
What aircraft design elements contribute the most to sustained flight?
2
Have other designs for individual gasper ventilation been tried?
3
Can quadcopter-like UAVs ever get significantly quieter? Any candidate technology?
8
Is there anything wrong with this more symmetric aircraft design, and why isn't it used?
11
Could flight control be achieved by rotating a wing entirely?
0
Does ducting help to stabilise heavy lift drones?
3
Could a quadcopter fly if its propellers were encased in cylindrical tubes?
1
Does the center of mass for an airplane have to be over the wings?