How can we design a wing for cruising at very low speeds?

I was thinking about a simple super-light aircraft powered with a little low-power piston engine. Is there any way that we can design a wing so the aircraft flies very slow (like 25 km/h as minimum speed) without stalling? I mean a suitable wing design for this kind of aircraft. (slow one) Other questions:

Large wings have a high root bending moment, which requires a strong and heavy structure. Next you should add bracing, at least on the lower side of the wing. For that to be effective, you need a high fuselage so the bracing will become efficient. Yes, those wires will add drag, but at low speed this will be a lot less than the added lift-induced drag from lifting a heavier structure. 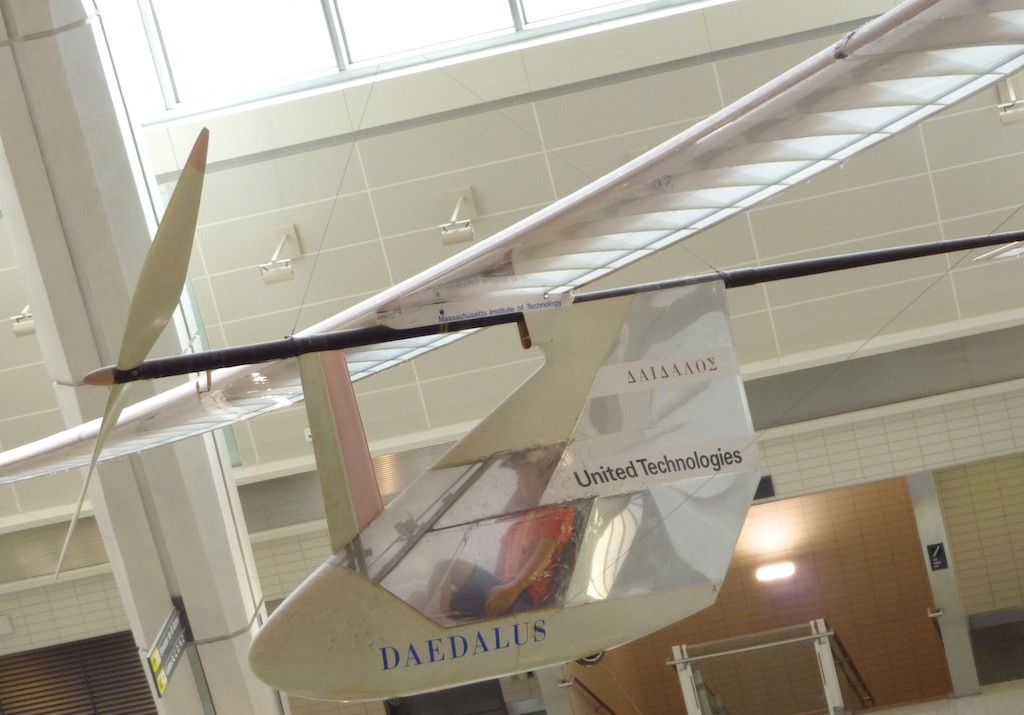 The single bracing wire can hardly be seen on this picture of the Dedalus human powered aircraft, but it is there and saves a lot of drag at low speed (picture source)

Next, pick the right airfoils. Depending on the local Reynolds number, use thin and highly cambered ones but make sure that the pressure rise on the rear upper surface is slow enough to prevent early separation. One example is the DAE31 outer wing airfoil of the Dedalus aircraft (the inner and mid-span ones are DAE11 and DAE21). At Reynolds numbers of 500,000 to one million, turbulators positioned 2-3% ahead of the separation line will trip the flow and make the airfoil tolerate steeper pressure gradients.

Pick wing chord such that the wing area gives a lift coefficient around 1, details depending on the exact Reynolds number. Lower values go with lower Reynolds numbers.

Wings that would produce sufficient lift at that low of a speed would have an enormously high induced drag. So unless you are operating a model plane that weighs almost nothing - I don't think you will have any luck.

You would need a high cambered wing to produce lift at low speed. The wing should have a very smooth surface and max camber should be placed further back to promote laminar flow which reduces air resistance. You could also use turbulators at the seperation point. Basically anything that helps to reduce weight and drag is your friend.

To reduce the risk of a stall you should also look at slotted flaps so that a higher angle of attack is possible.

To achieve a low Induced drag you should have an elliptical wing shape and a very high aspect ratio with winglets.

Such wing could be designed without much of a problem. Your plane could however not fly without an extremely powerful motor to counter the insane induced drag. Such motor would then weigh a lot. So you would need even more lift resulting in more drag thus an even more powerful motor and so on and so forth.

Therefore just use a helicopter ;) The slowest glider I have ever flown had a stall speed of around 60 km/h and it was an extremely light wooden aircraft. I am sure you could get a little better than that with todays technologies. But there is a reason why todays sailplanes fly faster rather than slower than they did 60 years ago.

19
How does chord length affect wing design?
8
How do blow holes compare to other means of tripping the boundary layer?
6
What is the relation between drag and weight?
4
Is it best to use a thick airfoil or an undercambered airfoil for slow speed flight?
2
Solutions to improve the aerodynamic behavior of a UAV

19
How does chord length affect wing design?
11
About climb: If we use T/W as input, the second grade equation yields two solutions for W/S. Are both solutions realistic?
4
How can I calculate the drag coefficient for a given wing design?
5
How much does it cost to design a jetliner's wing?
4
What is the purpose of thinner airfoils used near wing tips?
9
How do flaps deploy and stow with very large wing flex?
14
Would a two-seat light fixed-wing aircraft with a landing speed of 20 knots and a top speed of 180 knots be technically possible?
4
Eviation Alice Powerplant Placement
4
Could higher aspect ratio actually reduce gliding efficiency of a smaller glider?