Are there any Boeing 747 still flying for commercial use?

No American airline flies it anymore, but the Jumbo has been mythic for decades:

Is it still possible for a passenger to board a Jumbo Jet?
Which airlines are still operating the B747 in 2018?

Quite a few, actually.

British Airways is the largest operator of B747-400 and flies a number of routes:

The aircraft operates on a variety of routes, including:

Wikipedia lists 489 747s in service as of July 2017 though around half of them are cargo and the numbers would have reduced still further by now.

The latest data that I could lay my hands on lists the following airlines (less than twenty, sadly):

There are still lots of 747's in scheduled passenger service and at least a few dozen of them will almost certainly remain so for the next 20+ years.

There were deliveries of passenger 747-400s all the way up through 2005, so the newest ones are only about 12-13 years old. The U.S. airlines, however, were among the first customers and had some of the oldest ones. In Delta's case, they literally had the oldest one, as Northwest (which Delta acquired several years ago) was the launch customer of the 747-400. So, while Delta and United's 747s were mostly over 20 years old (some over 25,) many other customers operate much newer ones.

While the 747-400s are on their way out, the 747-8Is are mostly only a few years old and should still be flying for decades. These are currently flown by 3 airlines in scheduled passenger service, as well as several others in charter and/or VIP service.

While the Delta 747-400s with their lovely 14-seat 1-1 business-class configuration upstairs are unfortunately no more, if you're looking to ride upstairs on a 747, my personal recommendation would be Korean Air's 747-8s.

There are lots of 747s in cargo service and this doesn't appear likely to change any time soon. The 747-8F is still in production and has accounted for almost all of the recent new 747 orders. It appears that it will remain in production for at least the next few years and possibly quite a bit longer than that. UPS ordered 14 of them a little over a year ago, so that will keep the line going for at least a couple more years by itself.

Aside from the numerous 747-400 cargo and charter operators, the following operators all fly the 747-8F and, so, will likely continue flying it for a couple more decades:

Additionally, 8 747-8Is are being operated as business jets or VIP jets, not counting the 2 recently purchased by the U.S. Air Force for use as the next Air Force One fleet. If the past is any indication, the Air Force One 747-8s will likely still be in regular service (though technically not commercial service) even longer than most of the other recent 747 deliveries, due to the relatively low number of flight cycles that they get. They could possibly remain in service 30 years from now or more. For comparison, the current Air Force One fleet is composed of modified 747-200s, which have long been retired from airline service.

Probably more, but this is a start.

I took this photo in July 2016 at the Frankfurt airport. So at least in 2016 Lufthansa did indeed operate Boeing 747. 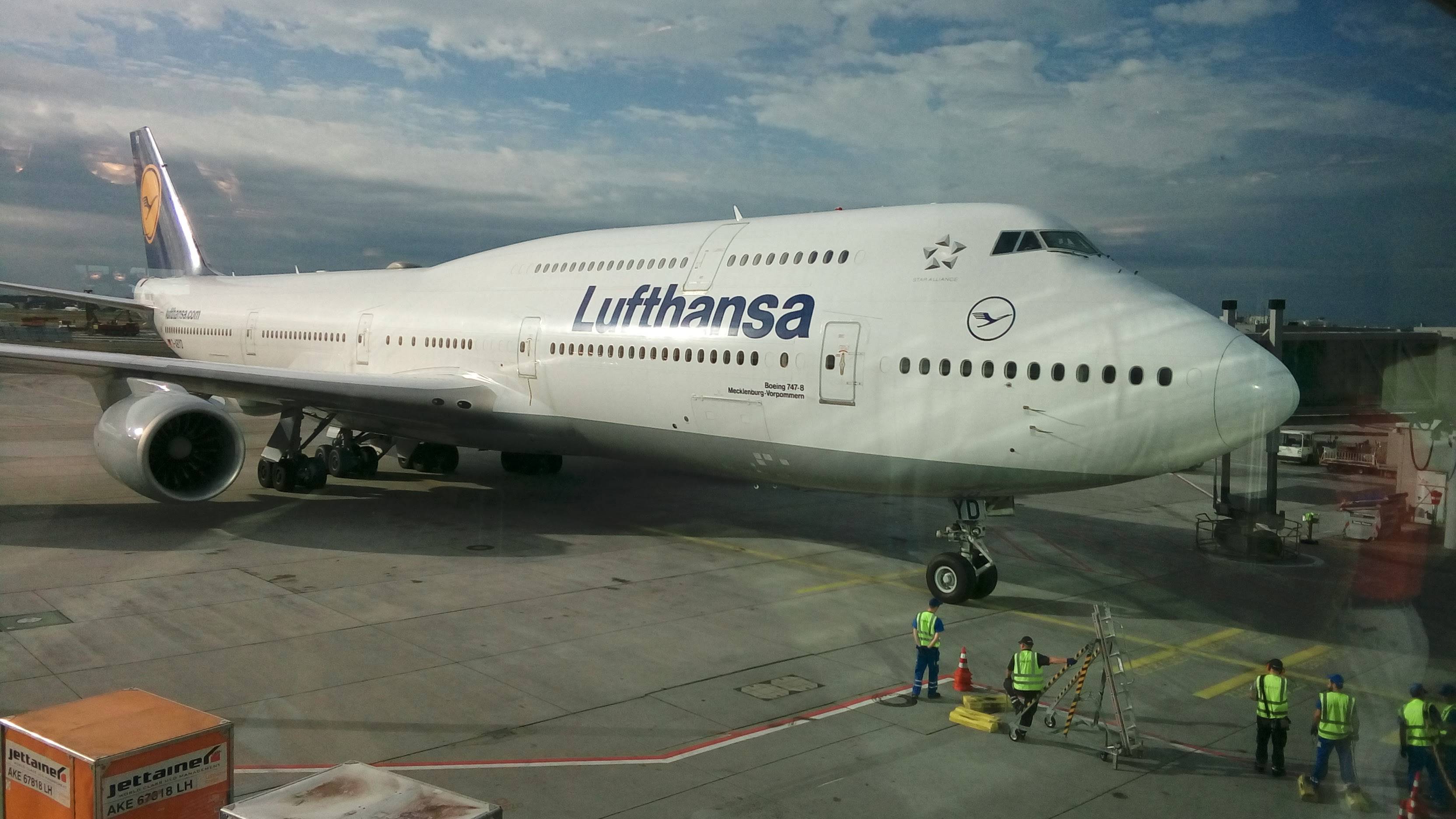 Looking at the older models, even the 747-200 is in commercial use, here is a complete list. Some days ago a 747-200 of Fars Air Qeshm was damaged in an accident. Boeing is not allowed to deliver repair parts.

But mins asks actually about flying as passenger. I'm not sure, but a 747SP is some kind of 747-100? So it is maybe possible to fly as passenger with one from Las Vegas Sands. But I'm afraid you have to spend a lot of money.

Not the answer you're looking for? Browse other questions tagged airlines boeing-747 or ask your own question.