Does static longitudinal stability require download on the tail?

After having encountered this meme too often for comfort, I ask myself today in order to have the possibility to explain the issue in detail.

No, static longitudinal stability does not necessarily imply a download on the tail. 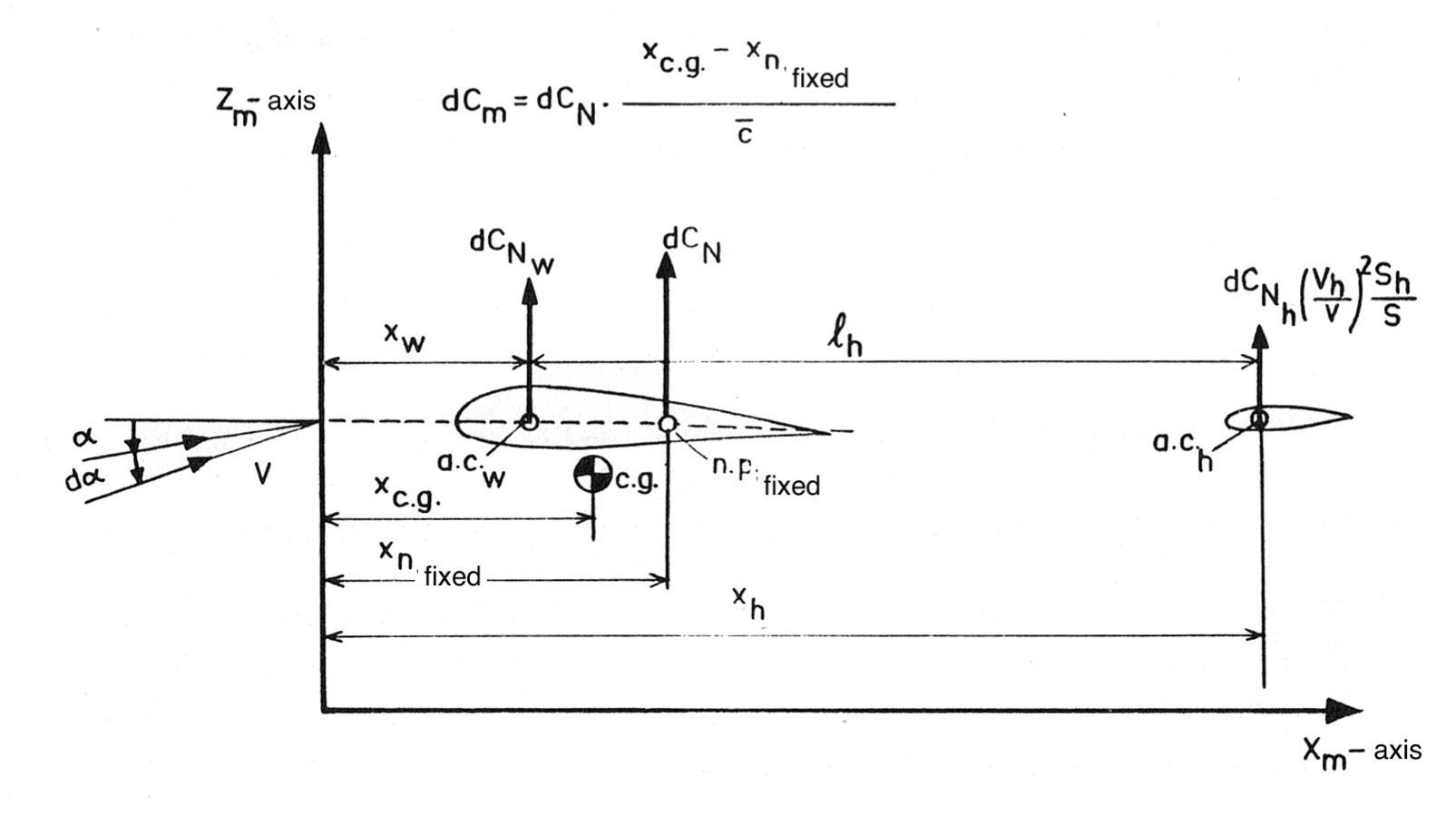 Static longitudinal stability requires that the Centre of Gravity is in front of the Centre of Lift, indicated as n.p.$_{fixed}$ in the drawing. Only then will an increase in Angle of Attack d$\alpha$ result in an opposing pitching moment: if d$\alpha$ > 0 then $dC_N$ > 0, resulting in a higher lift force. The neutral point must be behind the CoG in order to transform the higher lift into a nose down moment. Note that the drawing shows a longitudinally stable situation with a positive lift on the horizontal tail.

For the impatient reader: The answer is no.

Let me explain it in detail. For this, it is helpful to simplify things as much as possible and then add the complications step by step so I can explain what each changes.

The simplest layout uses a symmetric airfoil for both wing and tail and arranges both in the same plane and without a difference in incidence. If this arrangement is moved through the air at the subsonic speed $\text{v}_\infty$, the graphical representation in side view would look like this:

Both produce only friction drag and no lift. Now we add some angle of attack, in the next picture I chose 5°:

Now both create some lift (green arrows) in proportion to their size. The loading per area is the same for wing and tail - both have the same angle of attack and the same flow conditions, after all. Also, the local lift can bee summed up in the quarter point of the respective chord in both cases.

But that is too simple! Lift is created by deflecting air downwards, so the above picture is strictly possible only for wings of infinite aspect ratio. Therefore, the next picture shows the same arrangement with some downwash angle added behind the wing, so the angle of attack on the tail is reduced by $\alpha_{\text{d}}$ = 2° in this example:

This still leaves a positive local angle of attack on the tail (the downwash angle is quite a bit smaller than the wing's angle of attack, counted up from the zero-lift angle, for most regular airplanes), so the tail lift is still positive. In order to be trimmed at this angle of attack, the center of gravity needs to be between both lift vectors at a location proportional to the ratio between the two lift vectors.

But now a change in the angle of attack will change the local lift of both surfaces in proportion to the angle change. The result is an indifferent behavior towards changes in angle of attack. Flyable, but rather stressful. So we need to add a lower incidence at the tail in order to achieve static longitudinal stability:

Now the angle of attack on the tail is reduced by another 2°, and only a very small but still positive lift vector remains on the tail. The center of gravity needs to be shifted forward, very close to the quarter point of the wing to trim the aircraft.

A difference in the angle of incidences of only 2° is rather small, so we increase that to -5°, and now we indeed get a download on the tail:

If we now increase the angle of attack to 10° because we want to fly more slowly, we get more lift on the tail, right? The result should look like this:

With double the angle of attack on the wing the downwash angle doubles as well, but since the tail sees the same angle increase, its lift will turn positive, doesn't it?

Wrong again! The center of gravity has not changed, and in this configuration the tail has more lift than what is required for trimmed flight. And it better should - this is a stable configuration, after all, and an imbalance must result in order to create the nose-down moment required for stability.

This insight can be generalized: For airplanes with symmetric airfoils (like aerobatic airplanes) the lift force on the tail at trimmed level flight will be the same, regardless of speed. For that reason, a wing airfoil with a low travel of its center of pressure will require the smallest possible tail surface for a given wing surface in order to be trimmed at all speeds. This reasoning drove Willy Messerschmitt to pick the NACA 2R1 for most of his fighter designs and even the Me-321 cargo glider.

But for regular aircraft, a cambered airfoil is more common. Now we remove the last simplification and camber the wing airfoil. Below I adjusted the airfoil shape, but not it's incidence, so the now negative zero-lift angle will result in a larger effective difference in the angle of incidences. Whereas the zero-lift angle of the symmetric airfoil before was at zero degree, the cambered airfoil has a negative zero-lift angle of attack. Would the symmetric airfoil be mounted at the same effective angle of attack, its incidence would be higher. The tail incidence of -2° from case 4 can be reused here:

Note that the elevator is again deflected in order to trim the new angle of attack. Even though, the lift has crossed into positive values again. Not much, but a high lift on the tail should be avoided anyway. Not only should sufficient margin remain for control inputs, but also because lift on the tail is more expensive in terms of drag.

Conclusion: A stable configuration can be achieved with positive lift on the tail, at least at high angle of attack.

In another answer it was stated:

"... Lift is created by deflecting air downwards, so the above picture is strictly possible only for wings of infinite aspect ratio. Therefore... "

I politely demur. Any airframe, no matter the aspect ratio of the wing (or tailplane), will generate positive lift on both surfaces if the angle of attack is increased to a sufficiently positive value. This does not imply that this configuration would be stable.

As to downwash, yes there is downwash, but the downwash at the tailplane is very dependent on the position of the tailplane relative to the wing. In some aircraft, where the tailplane is mounted high up (a T-tail) the downwash is significantly less than the downwash when placed in a lower position (although, because of obvious effects, the downwash effect inceases as AOA increases - in fact this is what caused the infamous "pitch-up" issue in the McDonnell Douglas F-101 Voodoo, because of it's T-tail, and is the main reason for the anhedral on the F-4 Phantom horizontal stabilator).

To assume that the change in AOA at the tailplane due to downwash from the wing is a standard, calculable value independent of wing AOA, speed, G-loading, or placement of the tailplane is not a valid assumption.

Next, the issue of static stability is not explicitly addressed. Discussing the scenario of two different stable situations both of which are at 1-G level flight, but just at different AOAs and speeds, does not address what would happen if AOA was increased at the same speed.

When we talk about static stability, a common mistake is often made. We discuss overall static stability, as qualitatively measured by the magnitude of the static margin (the distance between the OVERALL aerodynamic center and the CG), but then, in diagrams, we draw separate vectors displaying the Force on the wing and the force on the tailplane. The total aerodynamic center is the combined effect of all aerodynamic forces on the airframe from all surfaces, not just the wing. and because the tailplane is so much further from the CG than the wing. it's effect moves the AC further aft than the green vectors in Mr Kampfs diagrams. To get to a situation where the total Aerodynamic center of pressure is ahead of the CG, requires that the wing Lift (the forward green arrow,) be much further ahead of the CG Than is depicted. This is why the configurations above are not stable. The Wing Lift has a Significantly higher nose up pitching moment from AOA increase disturbances than the nose down pitching moment from increases in positive lift from the tail plane. Just look at video showing F-16 out of control for an illustration.

But just thinking about the definition of AC tells us all we need to know. The AC is defined as the point within the aircraft, that All lift can be treated as acting through for the purposes of calculating pitch moments.

So if this point (the AC), is ahead of the CG, then it is by definition unstable, because it's pitch moment (from the effects of all lift, from both wings and tailplane), is in the same direction as any disturbance. Just as shooting an arrow backwards would be.

The only way this configuration can be stable is if the total AC remains behind the CG. Aircraft with elevator controls in front (canards) can accomplish this because the Wing, which produces the bulk of the lift, is behind the CG, and canard (in front of the CG) produces significantly less lift. So the total AC remains aft of the CG. In a conventional aircraft, where the main wing is ahead of the elevator control surface, this is not easily possible. If the main wing is behind the CG, then it will produce a nose down pitch moment, and the tailPlane must generate negative lift to balance pitch moments. If the main wing is far enough forward of the CG to put the overall AC also ahead of the CG, its Nose up pitching moment will (by definition, since the AC is ahead of the CG), be greater than the opposing pitching moment from the tailplane. The only way this configuration can be stable is if the Main wing AC is only slightly forward of the CG, but not far enough forward to place the overall AC in front of the CG. Designing an aircraft so that these attributes remain in this narrow band is problematic, and so, I believe, is not the normal aircraft design approach.

All discussion above about the effects of the camber on the airfoils are irrelevant. Regardless of the camber, or downwash, There is still a total aerodynamic center, through which all forces can be considered to act through for the purposes of calculating pitch moments (and by implication static longitudinal stability). and if this AC Is ahead of the CG, the aircraft is statically unstable, and will fly out of control unless the stability is augmented by other mechanisms (like FBW).

Not the answer you're looking for? Browse other questions tagged aircraft-design stability trim horizontal-stabilizer or ask your own question.

37
Why are there no cargo aircraft with "flying wing" design?
17
Is the Centre of Gravity moved by an aircraft travelling at “High Speeds”?
11
Why do airfoil's trailing edges point downward?
7
Why do tailplanes provide down force, if not for longitudinal static stability?
7
Can lift be created without air downwash?
12
How can we recover from a tailplane stall?
10
Can the design for neutral stability reduce trim drag?
6
How does a tailplane provide downforce if it has the same AoA as the main wing?
5
What are the properties of the wing (airfoil symmetry, angle of incidence) of an aerobatic aircraft?
6
Should the pitching moment be up or down?
See more linked questions