How is Spitfire landing gear powered?

I have seen a WW2 movie where the pilot of the Supermarine Spitfire has difficulties to extend the landing gear as the engine is no longer running.

This would be reasonable if the gear normally needs hydraulic or electric power to be extended, otherwise probably just an attempt to add more tension to the plot. Would running out of fuel (no engine power) make the extension of the Supermarine Spitfire landing gear more difficult or different from usual?

Early models of Supermarine Spitfire (prior to the 175th production aircraft) had no hydraulic gear extension system, according to Wikipedia:

The movie could show the normal extension of the undercarriage, using a lever, but a lost engine would not impact the operation.

After the 175th aircraft, the gear was hydraulics powered, so without engine running, the pressure could be insufficient. The design included an emergency extension using a $\small \textrm {CO}_2$ cylinder: 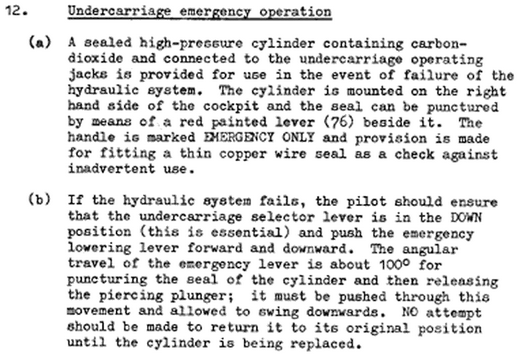 The system is visible on this image (black bottle with red handle "Emergency Only"):

The hydraulic gear control box is at the center.

Not the answer you're looking for? Browse other questions tagged landing-gear spitfire wwii or ask your own question.