What is the physical meaning of circulation found in Kutta condition?

The Kutta–Joukowski theorem is applicable for 2D lift calculation as soon as the Kutta condition is verified. When this is the case, there is a circulation $\small \Gamma$ around the airfoil. My question is related to this circulation:

The rest of this post is a presentation of the circulation theory which motivates my question, and as I understand it, but is not part of the question.

Wikipedia: A body with a sharp trailing edge which is moving through a fluid will create about itself a circulation of sufficient strength to hold the rear stagnation point at the trailing edge.

Wikipedia: The theorem relates the lift generated by an airfoil to the speed of the airfoil through the fluid, the density of the fluid and the circulation around the airfoil. [...] The lift per unit span $L^{\prime}$ of the airfoil is given by:

around a closed contour $C$ enclosing the airfoil and followed in the positive (anti-clockwise) direction.

Circulation of a fluid around an object by itself will produce no lift. The classic example of this is the spinning cylinder with no other airflow. Viscosity will cause the fluid near a cylinder rotating clockwise to circulate in a clockwise direction around the cylinder. If a left to right horizontal flow is introduced there will be a vector sum of the two flows. This results in the stagnation points near 8 o'clock and 4 o'clock (as opposed to the cylinder with no rotation in the left to right flow having the stagnation points at 9 and 3 o'clock.) The net result of this is the Magnus effect where lift is generated in the 12 o'clock direction.

In your first diagram (typical inviscid flow) there is no circulation. The shape of the airfoil in viscid flow causes the trailing stagnation point to move to the trailing edge (second image -- the Kutta condition). This has the same effect on the airflow as the spinning of the cylinder, in that it creates a clockwise circulation about the airfoil.

The line integral describes, for an arbitrary closed contour around the object, the dot product of the fluid flow velocity vector with the vector path moving around the contour. The simplest contour to analyze is created by following flow streamlines above and below the airfoil and connecting them before and after the airfoil with lines perpendicular to the streamlines.

Since the dot product of perpendicular vectors is 0, the integral along perpendicular portions of the contour are 0. The dot product of parallel vectors is just the multiplication of the scalar values, and since the direction of the contour is reversed between the upper and lower streamline the effect is adding one and subtracting the other. Due to differences in lengths and the different flow speeds (Bernoulli...) along the contour, the integral is non-zero. This number represents the net effective circulation about the airfoil (total flow minus the horizontal flow.)

There is no molecule in the air which actually revolves around the airfoil in the way you would normally think of it. Circulation is a mathematical concept used to explain the motion of air from a frame of reference bound to the wing. It is useful in understanding relative motion above and below the wing.

A similar situation might be a person walking toward the back of a train. The person can walk at 2mph and the train runs at 80mph, so is the person going forward or backward? The answer depends on your frame of reference: backward if you are on the train, forward if you standing by the tracks. Don't even ask about the direction from space.)

The simplest way to think of it is that airfow above the wing is moving faster than that below the wing, which gives the wing its lift. The cause is immaterial. For illustration assume a mach .8 aircraft has mach .88 airflow above its wing and mach .72 below. All molecules move to the trailing edge. If you want to compare these two flows, it is useful to subtract out the aircraft forward speed of .8 leaving mach +0.08 above the wing and -0.08 below, which defines the circulation. The negative speed (forward) below the wing only exists mathematically.

I very much like @Gerry's answer. It illustrates the principle of lift through potential theory very well.

I would like to add that circulation doesn't mean that fluid particles are rotating around the airfoil. In fact, even a simple rotating cylinder in an inviscid/irrotational flow would have well-defined streamlines flowing from upstream to downstream.

Rather, the integral definition of circulation in the OP is defined on a closed contour around the velocity vector field, not on a trajectory of any fluid particle. Intuitively, then, circulation illustrates how much a uniform flow has turned. 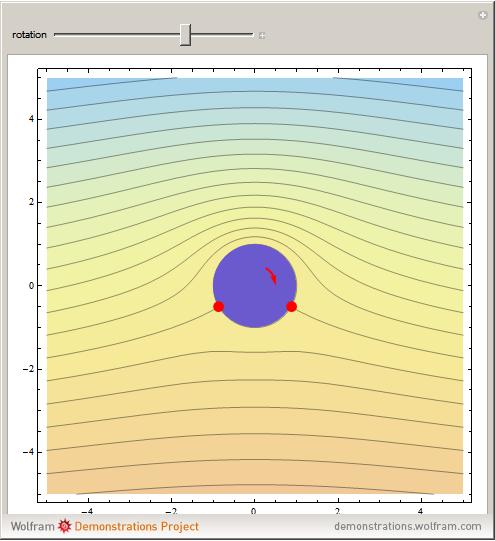 Not the answer you're looking for? Browse other questions tagged aerodynamics lift airfoil theory or ask your own question.

11
Why do airfoil's trailing edges point downward?
7
What is the physical explanation for the formation and position of stagnation points on an object moving in a fluid?
6
What is the pressure on the pressure side in relation to the freestream?
9
Is there a physical argument for the Kutta-Joukowski theorem?
2
How to demonstrate that an elliptical circulation distribution can be induced by an elliptical chord distribution?
1
Does a stalled wing exhibit no circulation?
1
Why is the stagnation point on the upper surface before the start of circulation?
3
Does an airfoil in supersonic flow have zero circulation?