While reading another Stack Exchange question I became aware that Europe approves several more "standard" (for training purposes only, but encapsulates European maneuvers) traffic pattern entries than the US. AC90-66A.pdf dated 1993 once authorized more than the Europeans but is superseded by date (2016) to the information in the "Airplane Flying Handbook (FAA-H-8083-3B) Chapter 7 (2016)".

Of course we follow ATC at controlled airports and are not held to any specific pattern at uncontrolled. Most pilots try to be considerate and consistent when possible, and predictable for safety reasons.

Similar but different StackExchange questions include...

Is a full traffic pattern required when there is no traffic at an untowered airport?

How is a traffic pattern oriented, entered and exited?

The illustration below shows an overlay off approved entries. The US is in red per FAA-H-8083-3B, and Europe in blue. Note the US approves a circle to the outside of the downwind that Europe does not. Europe acknowledges a straight in (don't we all do this?) but the US does not apparently acknowledge a straight (perhaps discouraged for safety reasons) - at least not in the latest 2016 FAA-H-8083-3B?

Does ICAO or another regulating authority offer any recommended International standard that the FAA is ignoring? 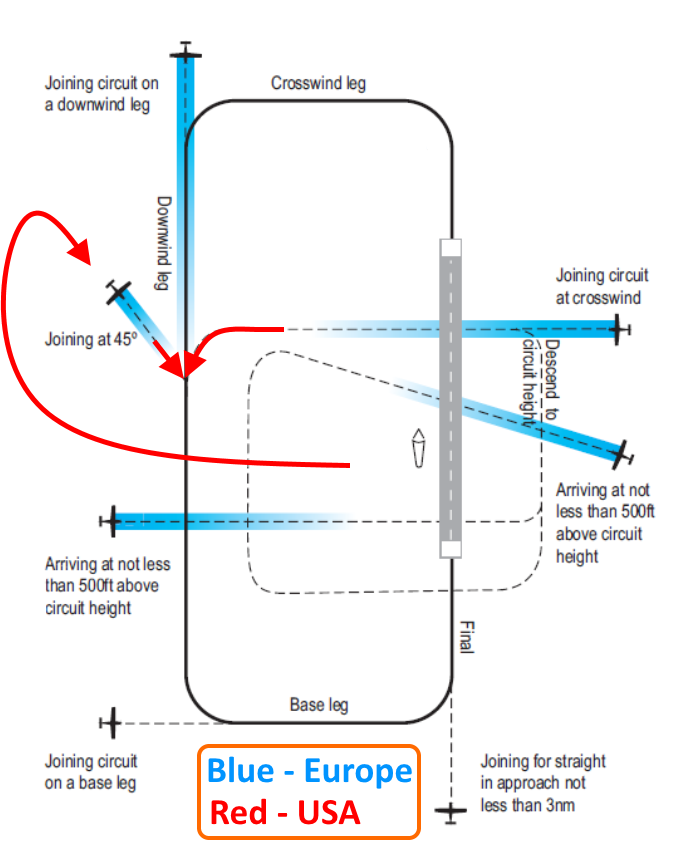 Browse other questions tagged air-traffic-control airport traffic-pattern or ask your own question.

2
How is a traffic pattern oriented, entered and exited?