Are engines automatically stopped in an emergency landing?

This answer made me wonder if engines are stopped automatically after an emergency landing as soon as one of the exit doors are opened.

(...) if the engine is still running, you're about to run forward into the area where you're at risk of being sucked into the running engine.

I'm not sure how high the risk would be to be sucked in or being blasted away by the jet-blast, I guess a lot of the emergency landings are because of engine failure so they aren't running anymore.

Maybe as an added extra - how long does it take for an engine to spin down to a safe RPM (so that it won't suck in people or blast them away)?

There is no automatic shutdown. However, shutting down the engines is part of the evacuation checklist done by the flight crew.

It's happened before that the controls link was severed and an engine could not be shutdown, such as in Qantas Flight 32.

Upon landing, the crew were unable to shut down the No. 1 engine, which had to be doused by emergency crews until flameout was achieved.

Aircraft are tested to ensure all occupants can evacuate with 50% of the emergency exits not working (glass half-full: 50% of the doors working). See: How are evacuation tests made as realistic as possible?

About how long it takes for the engine to stop producing thrust, it's about 5 seconds. If there is no or little thrust, there is no suction to worry about. Also note that figure is for a spool down from full thrust (not from idle thrust, which is to be expected after landing). 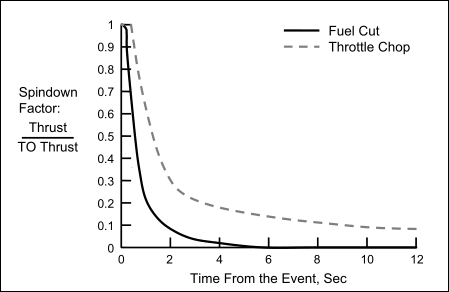 I guess a lot of the emergency landings are because of engine failure so they aren't running anymore.

That is not correct - there are many types of emergency landings: inoperative or stuck control surfaces, landing gear problems, bird strike, explosive decompression, etc. Engine failure is one of the failures people talk more about because it is easy to practice.

How long does it take for an engine to slow down its RPM? Around 20 seconds seems enough. I have no data to support this though.

There have been incidents, like Continental flight 426 in 1975 (DEN, cause was a microburst) in which the engines continued to run after the crash. Fortunately from the NTSB report it seems like the running engines didn't prevent passenger egress.

Not the answer you're looking for? Browse other questions tagged jet-engine emergency-procedures evacuation or ask your own question.

35
How long to clear the 'suck zone' of a turbofan after start is initiated?
32
Why evacuate upwind?
26
How are evacuation tests made as realistic as possible?
21
What are those arrow markings on the wing?
26
Is there any emergency situation in which jet engines would not be shut down before passenger evacuation of a transport aircraft?
4
Jet engine throttle-down time

12
How is the emergency exit row handled when there are no passengers aboard eligible to sit in an exit row seat?
26
Is there any emergency situation in which jet engines would not be shut down before passenger evacuation of a transport aircraft?
13
Are emergency actions an appropriate part of a captain's briefing in a light aircraft?
10
How are disabled passengers evacuated during emergency?
10
Do commercial airlines have procedures for evacuating pets from the cabin in an emergency?
5
Why aren't passengers trained and evaluated for operating emergency exits in commercial aircraft?
4
Are requests for an emergency landing ever refused?
0
Is it possible for squawk to change automatically in emergency situations?
2
Which way to turn to return to runway for downwind landing-- into crosswind or with crosswind?