Would a slower and larger rotor blade be practical?

Essentially a rotor is a rotating wing and the design of that wing generates lift. My question is this, why not increase the surface area of the rotor and slowdown the rotor speed. Rotor strength will also be increased. Slower rotor speeds will also reduce the turbulence created by the larger area of the rotor. I believe that this will also increase efficiency as the reduced speed can result in smaller engines being used to do the same work.

However, there are some disadvantages as well:

A smaller rotor will have a smaller and lighter hub and a lower overall parasitic drag: more efficient for cruising flight. There is a practical limit to blade radius of about 12 m due to static rotor droop when not spinning. From J. Gordon Leishman:

The static droop can increase quickly for larger rotor diameters and may cause problems when starting and stopping the rotor, especially in gusty wind conditions where the low centrifugal forces on the blades may lead to "blade sailing,"causing the rotor blades to flap and flex and perhaps impact the airframe.

The rotational speed of the rotor is determined by the tip speed, and is set such that at cruise speed the advancing blade tip stays below the drag divergence Mach number. Reducing the tip speed permits a higher flight speed to be achieved. 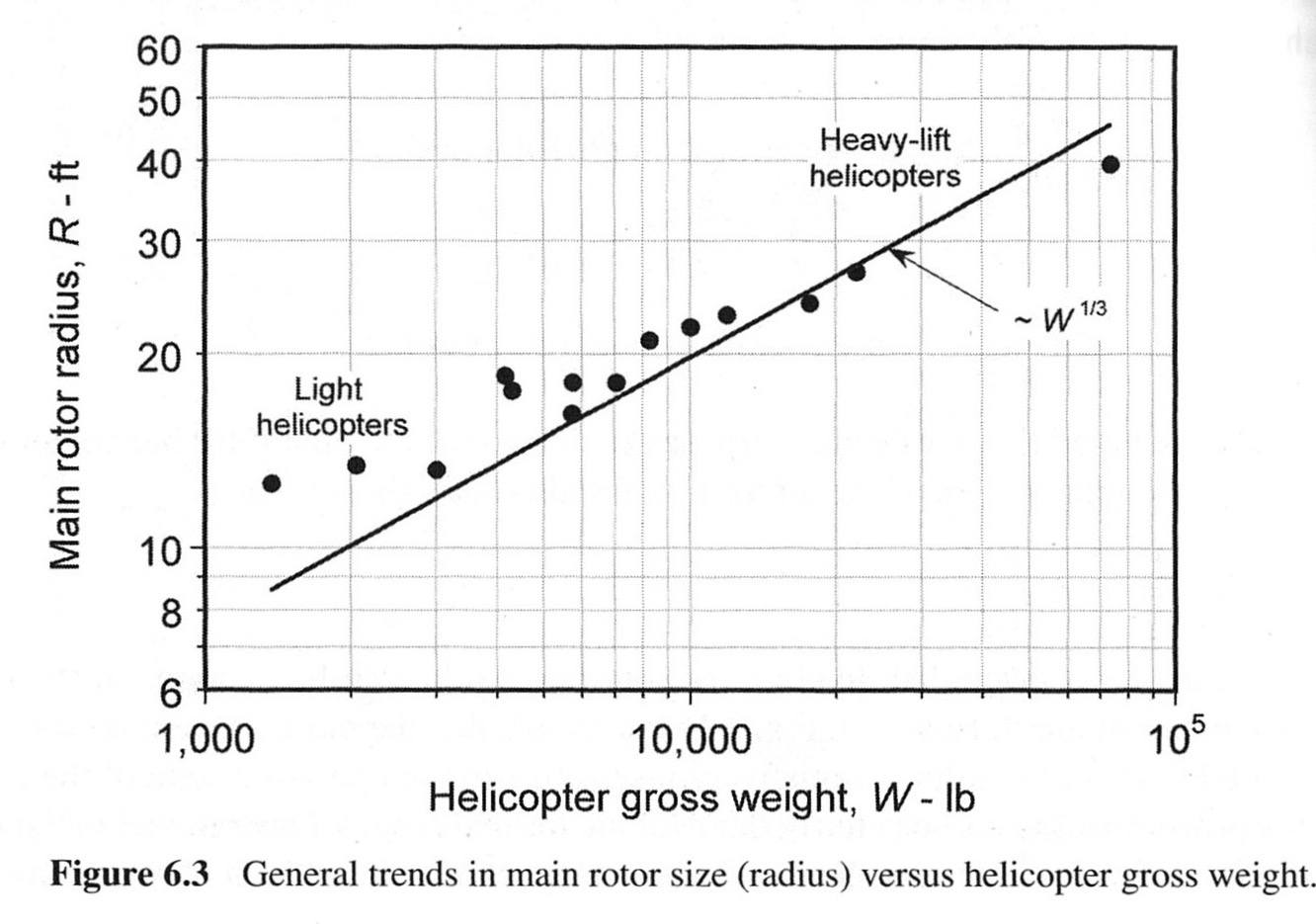 There is a design optimum for rotor disk size, determined by weight. The weight over disk area ratio is the disk loading and the analogy with wing loading of fixed wing aircraft is very strong: a large wing area creates more drag and construction weight. The relationship between disk loading and operating weight is partly governed by the square-cube law, and a clear trend can be observed when the two parameters are plotted against each other: there is an optimum governed by weight, and the optimum is not the largest rotor diameter.

Generally, all else being equal, if you can get a larger-diameter propeller or fan on your aircraft, you will have greater efficiency. We see turbofans getting bigger and bigger and bigger partially for this reason. It also underscores why the AeroVelo Atlas has such large rotors.

So why not just stick giant props on everything? There are many factors, including

Any aircraft design is the result of rigorous and extensive trade-offs and optimizations. The points you make are valid, but they are usually constrained by other factors.

Not the answer you're looking for? Browse other questions tagged aircraft-design rotorcraft or ask your own question.

13
Why does an aircraft pitch up when the speed increases?
4
What would the pros and cons be of this 'zig-zagged' high-sweep wing planform?
7
Is there an aerodynamic force that would keep this experimental WW2 era prop from flying as fast as an early jet?
2
Would the Concorde have been better off using a tailed delta wing?
7
How does the wraparound wing design reduce drag?
7
What are the disadvantages of fitting underwing flaps to a Mirage III/5 fighter jets to lower landing speeds?
2
Why does the NASA X-57 need a "gust control system"?
1
What justifies a biplane over a braced monoplane?
3
Optimizing the airplane for best cruising altitude and velocity