Could a golf ball damage an airliner?

Would a golf ball ingested into an engine, or impacting a windshield cause meaningful damage to a commercial airplane?

The scenario below outlines that this is possible, but the principle question is: would it actually matter, as in, would it cause the same level of damage as, say, a strike from a single bird?

At McCarran airport in Las Vegas (KLAS), runway 1R is situated just across the street from a driving range. Several years ago, I was hitting balls on this range when a 747 landed on 1R. It seemed impossibly low; many people on the range stopped hitting to point and take pictures. For context, here's a video (not mine) taken from nearly the exact same spot, with an approach to the same runway.

At the time, I remember thinking "That plane is very low... what if it got hit?" Appearances are often deceiving, so my initial assumption was that it must be higher than I thought, so a did a bit of basic trig to find out:

The touchdown markers on 1R are about 4,250 feet (red line in picture below) from the top-level hitting stations. With a 3 deg. glide slope, the plane would have been roughly 225 feet above the ground when passing over the driving range (slightly lower down range when balls that have been hit are at their highest point). 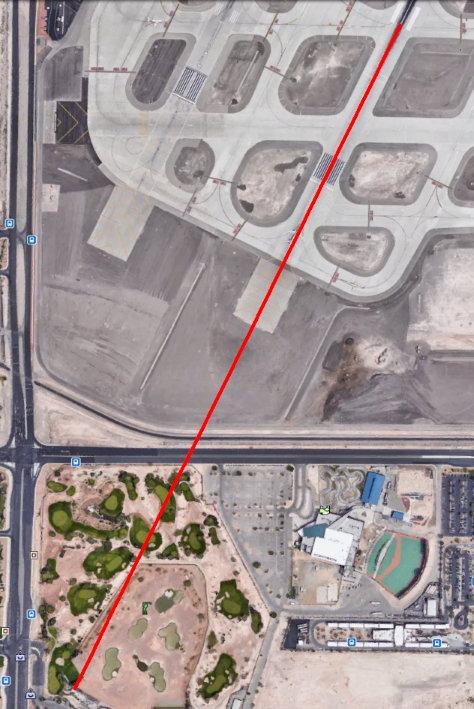 So, wind, timing, and the quality of golf shot actually struck notwithstanding, it seems at least possible that a ball hit from off that range could hit an airplane. In other words, the "bounding box" of the plane at least theoretically intersects a line representing the maximum height of a shot from the driving range. Thus, it seems unsafe, even if the chance is 1:1,000,000 (or greater).

I have to assume that since KLAS is one of the busiest airports in the U.S., that this is not actually an issue, otherwise changes would already have been made.

However, if an impact or ingestion were to occur, are there circumstances where it would be a "significant" event?

Turbofans on commercial airliners are tested against hail, up to 'golf ball size', and ice is harder than a golf ball.

Think back to Taca 110, that lost both engines while descending through a hailstorm reported to be up to golf ball size. What killed the engines wasn't the impact of the hail, but the amount of water ingested into the engines. It seems that the engines had been tested for water and hail ingestion at cruising speed... not at near idle, which was the power setting during a descent. Once identified, that problem was rectified quickly with mods to the engines.

Nor does the golf ball have the sheer mass of a goose, such as the flock of geese that took out both engines of USAir 1549.

Most likely, a golf ball striking a running turbofan would be sliced up by the front fan, and centrifugal force would tend to fling the fragments outward where they would exit via the bypass, and not through the turbine engine.

So I'd have to say, very unlikely, only to allow for the chance in a billion that the sliced up fragments of a golf ball might actually enter the compressor stage and cause a problem in one engine.

The greatest problem from a golf ball being ingested by a turbine, is figuring out what rule of golf applies... how do you mark your card? (WTF probably doesn't meet approved guidelines)

Is there a risk? Possible but I'd say negligible.

A typical champion golfer can drive a golf ball with a departure velocity of about 150 mph or so from the tee. That's fast but atmospheric drag quickly slows the ball down to around 50 mph or so by the time of impact back on the turf. Golfball drives from even the best athletes only gain about 90 feet of altitude during a typical drive, making it highly unlikely that that a drive could launch a ball to even the ILS decision altitude of 200 feet AGL. With a typical jetliner flying an approach at 140 knots (161 mph), it's highly unlikely that a golfball could catch up to the aircraft in flight as well.

But even if you cold drive a golf ball with a herculean effort, as any anti aircraft artillery gunner will tell you, it's extremely difficult to hit a moving aircraft using unguided fusillades. Golfers have enough trouble aiming for a putting green, taking into account position, obstacles, winds, etc. to have to add in the additional difficulty of hitting an airborne and fast moving object as well.

Now should a golf ball hit an airplane, yes there is a change to damage it similar to an errant drive hitting a car. Superficial dents or scuffs would be anticipated. It might damage an aircraft window, though I highly doubt it would shatter, particularly windows on pressurized aircraft. Golf balls ingested into engine intakes and or propeller arcs would be pretty hazardous for the aircraft as well.

So who knows, maybe someone here can dig up a wild story from the past where a golfer nailed a low flying 707 with a drive and took out an engine, but I highly doubt it's possible and really not even a risk at that distance from the airport.

Now a pilot with an engine failure shortly after takeoff and makes a forced landing onto a golf course, only to have an ill tempered golfer fire a drive at his airplane out of ire, that's another possibility.

This is an answer to a slightly different question: Could a golf ball damage an aircraft?

The answer is yes, at least indirectly, as it has happened in 1987 in Benin.

Basically, this golfer hit a bird with the golf ball. The bird fell into a fighter on takeoff with the canopy open (or hit the windshield, unclear). The pilot lost control of the aircraft and subsequently collided and destroyed several other planes on the apron.

Not the answer you're looking for? Browse other questions tagged safety foreign-object-damage or ask your own question.

27
What is the maximum safe bank angle of a 747?
8
Was this Gulfstream way below the glideslope?
12
Is there a minimum distance between a runway and a public road?
18
How does the Harrier avoid engine damage when operating from dirt fields?
2
Why are the VHF and UHF airbands directly adjacent to frequency bands used by vital radionavigation aids?
1
Why don’t flying-boom tankers have collapsible/frangible/breakaway refuelling booms?