How (and when) to use the BFO button on an ADF?

BFO (Beat Frequency Oscillator) is a function of the ADF, I know that it has something to do with different types of NDB, but I do not know which type. And how and when do I use it?

I heard that depends on the type of emission of the NDB in use. For what I know there are N0NA1A or N0NA2A but I do not understand how this imply the use of the BFO push button or even the differences (from operational point of view) between the two!

It's akin to activating the VHF1 or 2 buttons on the audio panel, but for certain NDB stations. From the KR 87 manual (.pdf):

Outside of the United States some stations are unmodulated and use an interrupted carrier for identification purposes. The BFO mode, activated and annunciated when the “BFO” button is depressed, permits the carrier wave and the associated Morse code identifier broadcast on the carrier wave to be heard.

From an operational perspective, if you want to hear the Morse code if it is not audible, activate the BFO mode. 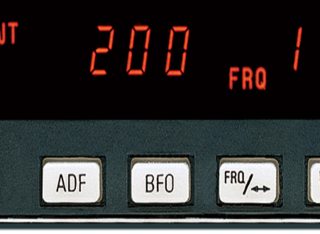 Let me try to explain this from the radio perspective.

In a regular AM transmission (A3E emission type), you have a carrier and two side-bands. The usual receivers use the carrier to demodulate the audio information in the sidebands. The spectrum looks something like this: 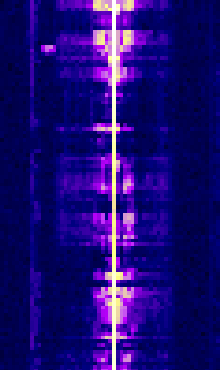 Note: Vertical axis is time, with present being a the bottom, horizontal axis is frequency, increasing from left towards right and amplitude is encoded in color, with dark blue/black being low amplitude and white being high amplitude.

The two sidebands are the wavy-looking structures to the left and right and they carry the audio information. The carrier is in the middle and can be seen as the bright white line, especially visible during moments of silence.

When we want to send let's say Morse Code telegraphy over AM, we get the A2A emission type: Carrier and two sidebands, each carrying Morse code data.

Here, we can also see the bright white carrier and the Morse code in the sidebands, with lower being a bit weaker than the upper.
Now, our AM receiver doesn't really know what's in the sidebands, the audio just goes to the speaker. So no special adjustments are needed to use a AM receiver for A2A emissions.

OK, so what does this have to do with BFO? Well, BFO is needed when we want to receive carrier-less data using regular AM receiver.

Let's now take a look at the spectrum of a A1A signal:

There isn't much to see, only the "carrier". However, if we take a look at a real-life recording of the spectrum, we'll see that the carrier is being turned on and off, with no sidebands.

Now, when we input that to our AM receiver, we won't hear the Morse code. Depending on the receiver type, there might be an audible lack of noise when the carrier is on, but the expected tone is not there, since the sidebands are empty.

The BFO (Beat-Frequency Oscillator) helps us there. It artificially re-inserts the carrier, so combination of the re-inserted carrier and the A1A signal reach the receiver. The receiver thinks it's hearing a regular A2A or A3E signal and just outputs the received Morse Code tone. On the spectrum, we see something like this:

So the answer would be to use the BFO with A1A NDBs and not to use it with the A2A NDBs.

Why the name BFO?
When two sinusoidal signals, with frequencies A and B are mixed together, the result is a pair of new signals with frequencies A+B and A-B. This phenomenon is called Beating. In case of radio, if the signals are close together, the difference can drop down into the audio spectrum. For example, beating of 353 kHz signal with 352 kHz signal will result (among other things), in a 1 kHz signal, which we can output to a speaker.

A3E/A2A power and spectrum efficiency:
The carrier and one sideband do not participate in the actual transmission of information and are therefore wasted power. Newer systems try to avoid using them, when possible, also saving space in the spectrum. However, the carrier simplifies receiver design.

A2A variants:
Depending on the region, the A2A beacons might have the carrier on all the time, as shown above, or might key the carrier as well as the sidebands. Furthermore, some might only have one sideband, and save some power through that. Regular AM receivers can receive signal with a carrier and only one sideband. This is called Compatible Sideband.

J3E and BFO:
J3E, aka Single Side Band is a refinement of AM which is mostly used on high-frequency bands. It eliminates the power wasted in the transmission of the AM carrier and the other sideband and also uses less spectrum space, which is in shortage on the high-frequency band. On the other hand the receiver and transmitter are more complicated. In aviation, the upper sideband is currently used. An AM receiver with BFO can be also used to receive J3E transmissions. Here's a spectrum of that:

Not the answer you're looking for? Browse other questions tagged flight-instruments or ask your own question.

0
What is meant by Manual Tuning of ADF/NDB using BFO?

13
When/How may I replace the Turn Coordinator with an Artificial Horizon?
8
How does the A320 FMGC (autothrust, autopilot) decide which radio altimeter readings to use?
12
OBI, RMI, HSI… What combination do GA aircraft w/o glass typically have?
12
What navigational aid(s) would WWII bomber pilots have used while flying in instrument conditions?
21
What is this INOP instrument and when is it safe to fly with INOP instruments?
2
How useful are the AOA Indexers and indicators for jet pilots and civillians?
3
When resetting the heading indicator to match the magnetic compass, do I need to use the compass deviation card?
0
How does the heading selector on the ADF work?
3
What are the ANT and ADF modes on an NDB receiver?