Why did flight NH175 divert back to Los Angeles?

In the news recently is All Nippon Airways flight NH175, which returned to LAX after four hours towards NRT when it was discovered that a passenger aboard did not have the correct ticket, although his ticket was nevertheless to Tokyo. Two points immediately come to mind:

Perhaps another way to state the overall question is to ask why ANA protocol necessitates a return to the originating airport in this case.

Yes the flight was closer to PANC, for example. Approximate location based on average ground speed and time it took to return to KLAX is shown below (to make sure there weren't any map projection antics). 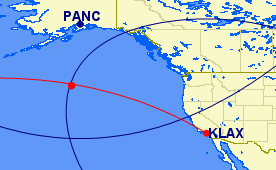 Security protocols are not public, but we can deduce from the timeline of the events what had happened.

The cabin crew became aware first (not the airline ops), which means the passenger was likely to be the one to bring the issue to them. Boarding a different painted airplane nowadays than the one on the ticket is no biggie with code-sharing and whatnot, honest mistake.

"While" on the way back, the airline ops discovered it was a mistake, when exactly, no reporter says. Maybe it was soon after.

Then proceed with protocol. Reacting and overreacting are different. In conclusion, there was no rush to quickly get rid of the passenger.

Addendum: Here by coincidence Alaska is also part of the US, a different route means you're going to burden another country with unneeded trouble, and as the police confirmed, there was no security risk (while the plane was headed back).

Not the answer you're looking for? Browse other questions tagged safety airline-operations usa commercial-operations or ask your own question.

7
Why can't pilots drink alcohol after a flight?
13
Did commercial airliners have microwave ovens in the past?
2
How much revenue do seat-back displays generate?
16
Why did air traffic levels decrease dramatically in the US through the 2000s?
5
Could improper deplaning of a flight with full fuel tanks cause the plane to tip?
9
What is the role of the flight dispatcher? How do the dispatcher and the flight crew interact?
5
One man push-back
9
Why was this commercial plane highly delayed mid-flight?