Is Doppler navigation still in use for civilian aircraft?

Is it possible to find an airliner nowadays with Doppler radar used for navigation purposes?

Only in military applications nowadays, primarily helicopters as the system doesn't require the alignment process of the INS system, is not subject to GPS jamming, is very accurate when flying low (as opposed to high and fast over oceans), and most helicopters don't do the occasional barrel roll (the system is belly mounted to track the ground below).

(Calm seas messed with the Doppler early-on due to the double reflection – surface and sub-surface.) 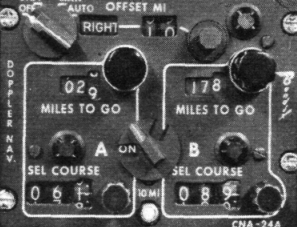 However for the airliners, as you ask, it was short-lived, but it helped usher in a new era.

TWA in c. 1962 fitted its Boeing 707 fleet with dual redundant Bendix DRA-12 Doppler systems and CNA-24A computers (pictured above). After demonstration flights to the FAA for technology proving, TWA was the first to let go of the navigator (the fourth crew member back then). It was the first time long-haul over-water flights were operated without a dedicated navigator.

The inertial navigation system in that decade was still a top military secret. But the technology and computing power were making their way into the civilian world.

First was the sub-inertial navigation system (part INS; part Doppler), such as the Sperry SGP 500 gyro platform coupled with a Decca Type 72 Doppler. It was cheaper than a pure-INS system and had improved accuracy over a pure-Doppler system.

Initially operators favored the sub-INS system, because of the much quicker alignment time. In that era, any disturbance to the aircraft – while being refueled or boarded – would add to the alignment time. That was c. 1969.

1971 – just under a decade from TWA's initiative – was when the INS first made it onto an aircraft as default equipment straight from the factory. The plane was the Boeing 747, the INS system was the Carousel IV, and the rest is history.

(Doppler navigation was also used on general aviation aircraft, and much like the VOR-based RNAV equipment, such as the King KNS 80, both yielded to the GPS.)

Not the answer you're looking for? Browse other questions tagged airliner aircraft-systems aviation-history navigation radar or ask your own question.

20
What means of navigation did commercial Soviet airplanes use in the 50s-90s?
4
Is any device installed on airplane to measure wind speed relative to the ground, and its direction?
6
What sort of briefing and planning information would an airline pilot in the 1960-70s have used?
6
How does IRS estimate the alignment time?

7
What are magnetrons installed on aircraft used for?
3
What is the primary means of IFR navigation for private pilots?
11
How can aircraft determine true north for inertial navigation systems?
21
What is the difference between conventional VOR and Doppler VOR?
3
How is the terrain displayed on the ND in a A320?
8
Can air-superiority radar function as weather radar?
10
What is Mode B on the transponder?
20
What means of navigation did commercial Soviet airplanes use in the 50s-90s?
1
Do any civilian aircraft use AESA or PESA for weather radar?
0
Can we use ECI coordinates for an airplane?