What was the first commercial aircraft to have a 'built-in' oxygen system? 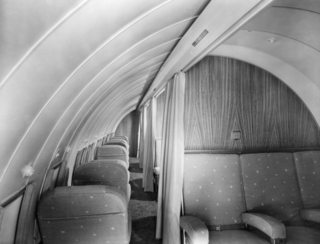 (Source) Boeing 307 of TWA, the 307 was the first pressurized passenger aircraft.

So what was the first passenger aircraft to have a built-in oxygen system, as opposed to carry-on oxygen?

The B307 may have been the first pressurized airliner, but it was usually flown at 12,000', and did not have a passenger supplemental oxygen system.

"Captain Frank E. Adams, 23.02.2011 I flew the S-307 2 years for Pan American Airways (1943/1944) and today remain one of the few pilots in the world who is still rated for this aircraft. My biggest complaint about this description is that the aircraft could only be pressurized to a maximum of 2.4 psi so that the advertized service ceiling of 26,200 feet is greatly exagerated. A flight altitude of 22,000 feet would result in a cabin altitude of 14,000 feet and we had no passenger emergency oxygen on board. Also,the Wright engines had no turbos and so were basically sea-level engines which could not retain cruising power output above 12,000 feet. For this reason we flew the S-307 at 12,000 feet southbound and 11,500 feet northbound between Miami and Panama."

Later pressurized airliners like the Douglas DC-7, Lockheed Constellation and De Havilland Comet were flown much higher and I expect they would have had some form of built-in supplemental oxygen system for the passengers. (unfortunately I can't find any evidence online)

I did find an advertisement from January 1957 which shows a Scott passenger oxygen system which would represent what was used on the Boeing 707. (first entered service in October 1958) 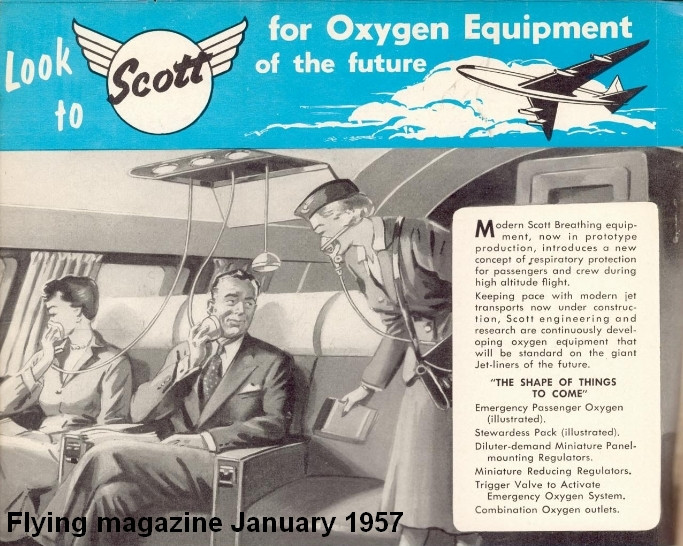 While researching for the question, I was only able to find the first liquid-based oxygen system, which is this answer:

The Provisional International Civil Aviation Organization (PICAO) issued recommendations in May of 1946 that oxygen must be made available in commercial aircraft that fly above 10,000 feet (whether pressurized or not). 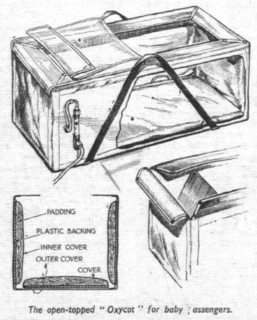 (Source: Flight) A young child's oxygen cot (or Oxycot) of 1948, one of the early solutions to supply infants with oxygen in case of emergency.

One of the first airliners to feature a built-in solution, based on liquid oxygen, was the British Vickers VC10, which first flew in 1962.

On long-haul aircraft, liquid-oxygen supplies for the emergency oxygen system offer considerable attractions in weight and space saving, as compared with gaseous oxygen systems. One of the first airliners to be thus equipped will be the VC10, for which Normalair Ltd, of Yeovil, Somerset, are supplying a 35-litre liquid-oxygen converter (Flight, 1962). 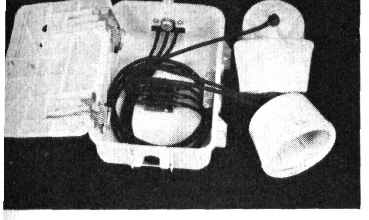 The following ad from 1962 says the VC10 was the first airliner to have a liquid-oxygen based system. 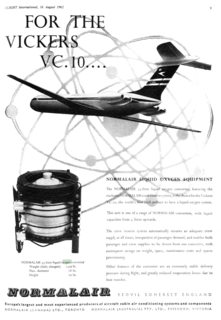 8
Which was the first pressurized aircraft?
0
Why was the 307’s pressurisation system removed when it was modified into the C-75, despite the fuel-burn advantage of higher-altitude flight?

11
Why are rules regarding the use of oxygen masks by commercial pilots often ignored?
10
What was the Trim Problem on the Brabazon's First Flight?
2
What was the first production jet engine to use a semiconductor based control system?
8
Which was the first pressurized aircraft?
21
How could the Helios 522 passengers have survived so long without oxygen?
5
What was the first aircraft designed with a plug-system fuselage, and why?
3
Why didn't Boeing make the Sky Interior for the Boeing 777?
0
Why was the 307’s pressurisation system removed when it was modified into the C-75, despite the fuel-burn advantage of higher-altitude flight?
5
Is the F-16 capable of taking off during a nerve gas attack?