What is the fan tip speed at maximum thrust?

Are they efficient at maximum thrust?

Second question first, the higher the jet engine thrust, the more efficient it is (in terms of thrust for fuel rate, bang for buck).

On to the Trent 900 and PW6000, the big one and small one. The bigger fan will have slower RPM. From the type certificates the max permissible RPM's are 2818 (takeoff) and 6350 (undefined), respectively.

Here's the caveat, the fan RPM (%N1) at takeoff does depend on the ambient air pressure and temperature (among other operational considerations). But as you can see, the smaller fan can rotate faster—read: max permissible—because it has less mass and the centrifugal forces are more manageable.

And since the 1960's or so, the fan RPM is rarely a limiting factor for the jet engine operation, so the engine manufacturer will have designed for the optimum blade tip speeds.

It might be necessary to limit the engine RPM in order to avoid overloading the fan blades in centrifugal force, and to control the fan blade tip speeds. This is purely an N1 limit and is not a function of altitude.

The N1 limit is rarely more restrictive than the pressure and temperature limits.

So much so—as you can see below from a 777 manual—the hotter and higher the airport up to about 40-45°C, the faster the takeoff N1 is to compensate. 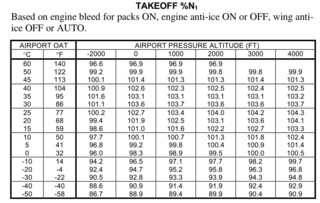 That answers the efficiency part, and the blade tip comparison as requested.

Not the answer you're looking for? Browse other questions tagged jet-engine efficiency blade or ask your own question.

4
Is a turboprop or a turbofan more eco-friendly?
4
Why does lower atmospheric pressure produce higher EPR (thrust)?
2
How will the Boom SST not require an afterburner?
-4
Can compressor blades be made larger to increase thrust and efficiency?

6
Are turbine engine reconditioned after severe FOD damage caused by bird strikes?
24
In what way are the Concorde's engines considered efficient?
10
What is the function of the protruding outlet on the Trent XWB?
7
Why do jet engine fan blades have a twisted shape?
4
Why does the Trent XWB have intermediate compressor stages?
2
What is the GE90-115b turbine power output in horsepower?
18
Why does each fan blade have a different mass and frequency?
1
What is the temperature range of engine mounts connected to the pylon?