How are the dimensions of the empennage determined for jetliners?

How is the height of the vertical and span of the horizontal stabilizers determined for different turbofan aircraft like the Airbus A380 and the Boeing 747-8?

What are the maximum forces (in kilograms or Newtons) acting on both the horizontal and vertical stabilizers for aircraft like the Airbus A380 or the Boeing 747-8?

The tail volume coefficients for the horizontal stabilizer ($C_H$) and vertical tail ($C_V$) for jet transports are 1.00 and 0.08 respectively.

For the horizontal stabilizer, for example, with the $C_H$ given, and the lever arm, [main] wing reference area ($S_W$), and MAC known, the area can be calculated.

The shape, sweep angles, aspect ratio, etc., of each surface have their own rules.* Knowing the shape and area, the span or height is calculated.

Example 1: When the lever arm was reduced when the A319 was shortened to become the A318, they had to compensate by increasing the vertical stabilizer area, which meant a higher tail.

Example 2: Boeing designed the 757 and 767 simultaneously, so in order to reduce the fabrication and tooling costs, both shared the same tail, with the 757 tail shortened at the root (Flight, 1979). 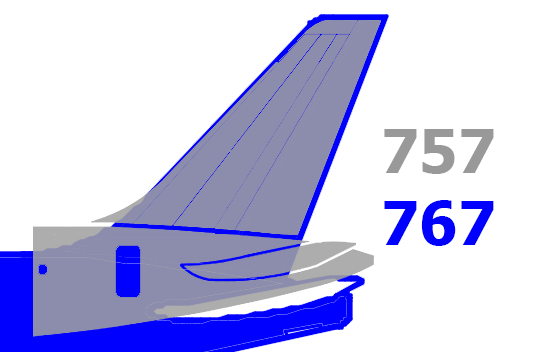 Not the answer you're looking for? Browse other questions tagged aircraft-design control-surfaces or ask your own question.

10
Why do similar Airbus and Boeing aircraft use different flap and slat mechanisms?
3
Does this type of stabilizer exist?
1
Would “wind turbine generators” in the bypass stream save fuel for jetliners?
5
What would be the drawbacks of using a rotating engine as thrust reverser on airliners?
1
What is the sweep angle of the Boeing 787's horizontal stabilizers?
1
Would installing 6 engines on an Airbus A380 and or Boeing 747-800 achieve a shorter take off distance?
6
How is the area of flaps determined?
5
Heaviest Boeing vs Airbus aircraft: Why large (150 ton) difference in Weights?
8
Why is the empennage design of this Lockheed 1049E so complicated?