How much does it cost to design a jetliner's wing?

The cost of designing a brand new wing for a jetliner, compared to modifying an existing one—with or without the changes to the production line—how is it estimated?

Related questions that come to mind: Are there various methods? Does the cruise speed (wind tunnel cost) and MTOW (size) affect the cost?

Context to prevent an XY problem:

Speaking to Flight in 1987, Gary Smythe, chief customer engineer for the MD-11/DC-10, talked about the reason behind the minimal changes to the MD-11 wing compared to the DC-10.

To have gone for an all-new wing design "would add $10 million a copy to the price of an MD-11." That course of action would defeat the whole Douglas "low total ownership cost" approach.

Given that they projected 300 sales, that means the design (and manufacturing changes) would have cost \$3 billion (\$6.5 billion in 2017). The MD-11 had subpar performance for the Pacific market early on, and that was one of the reasons attributed to its low sales.

The same thing happened with the MD-90 with its MD-80 wing. Because of this and despite having a cleaner wing of same area, same engines (V2500), and about the same seats as the A320, it could not achieve transcontinental range (both for the US and Europe), and it had longer takeoff runs.

An expensive re-wing was announced in Farnborough 1996, but was awaiting to be "sanctioned". There is no mention of the projected cost.

"It would be an all-new wing, not a revised version of the present one," says the president of MDC's Douglas Aircraft division, Mike Sears. The present wing design is a revision of the MD-80 wing. The MD-90's range is limited to intra-continental operations in the USA (Flight, 1996).

Only a few months later Boeing merged with MDC. 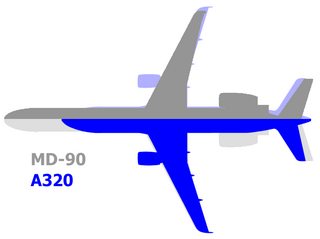 (Own work via boeing.com and airbus.com) Comparing the MD-90 and A320 wing and planform. Note that the MD-90 is one seat narrower.

This is what I could find, but perhaps there are other methods as well.

A 2002 MIT research[1] arrived at a correlation between weight and cost based on publicly available figures. The non-recurring (development) cost of a wing is broken down into:

MDC spent less than that for the whole "engineering, tools and flight testing," a cool \$700 million. Plus "$2.5 billion in inventory for initial production." (latimes.com, 1990)

Seeing how the table above shows how expensive the empennage and systems are, and with the major changes done to those areas on the MD-11, one can see why they went this way.

(Regarding a comment about the weight of composites vs. metals: a composite airliner is generally not lighter.)

The design of a new wing requires many steps:

In the roskam's book an initial estimation of the aircraft testing cost is provided.

13
Why didn't the Boeing 757 share the 767 fuselage?
6
What is the average weight difference between composite and metal airliners?
1
Do MD-11 pilots ever use flaps 50?

27
Is wingtip design mature?
3
How much does a Black Box Underwater Locator Beacon (ULB) cost?
8
How much does an ILS approach cost?
113
Why does it take so long to develop modern military jets?
11
How much does a Hundred Dollar Hamburger actually cost?
2
How much does it cost to lease a jetliner?
4
How much does a passenger-to-freighter conversion cost?
1
How has Computational Fluid Dynamics improved commercial airliner wing design?