Why are there different number of propeller blades on the inboard and outboard engines?

The Junkers G 38 has four propeller blades on the inboard but only two on the outboard engines.

What's the reason for this special arrangement and is there any benefit? 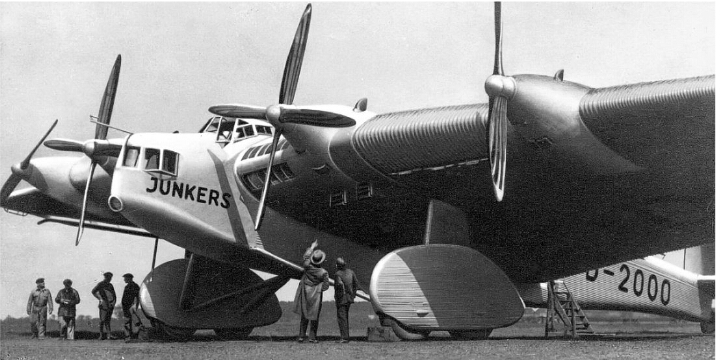 Yo can see the specs of the airplane here https://en.wikipedia.org/wiki/Junkers_G.38#Specifications_(G.38_1929)

What's interesting is the why. In essence this plane is powered by 6 identical engines, which helps with the parts commonality and maintenance.

Owing to the financial difficulties of the interwar period, the inboard bigger engines (L55) are a doubled version of the outboard ones (L8a): an inline-six configuration turned into V12. Which helps save weight and structural reinforcing, and delivers the right amount of power.

Speaking of doubling an engine, you can double a V12.

Junkers had the L2 engine in 1925, it was enlarged to become the L5 (with license from BMW). The L8 is a higher power L5. And the L55 is a double L5. It's a good engineering solution to the lack of engine diversity.

The aircraft was later upgraded to have 4 identical Jumo 204 diesel engines, the original configuration (L55 and L8) was petrol.

18
Why are there so few aircraft that had inhabited wings?
4
Where to find information on the Daimler-Benz 606/610?

35
Why do propeller blades not have winglets?
35
Are all the engines on a multi-engine plane the same?
12
Can noise from contra-rotating propellers be reduced by having a different number of blades on each propeller?
4
What is the difference between inboard and outboard engines on a Russian IL-18 turboprop?
16
Why does the C-2 left inboard stab not have a rudder?
7
Why divide the blades of a 9 blade propeller into 3 groups?
7
Why are the B-47’s inboard and outboard engines mounted so differently?
3
How does one choose the number of blades and the diameter required for a turboprop propeller?