Can the mass flow rate for different power settings be determined?

An answer in this question suggests using thermodynamic equations to approach this. However, I am not too sure on how to use these equations.

Yes, it can be done but you need a complicated model with information only the producer has access to. The data in your source are not enough.

You can play around with this a bit https://www.grc.nasa.gov/www/k-12/airplane/ngnsim.html but don't expect overly realistic answers. You have to use the Tunnel Test Mode for off-design performance after entering all the data you have available. And you should pick the "turbofan" engine type.

Prediction of the mass flow, fuel flow and thrust can be given without detailed knowledge of the compressor and turbine maps, as the pdf in this link states, when we assume that the LP turbine is always choked because it operates in front of an exhaust nozzle.

The linked pdf gives an elaborate method for determining the off-design parameters for different turbofan engine configurations. The difficulty is that all parameters change relative to each other: mass flow, thrust, fuel flow, even the bypass ratio.

The paper matches the computed data with actual published data of two turbofan engines, neither of which unfortunately are from the PW2000 series. The closest one calculated is the RB211, which is a three-spool design but the twin spool simulation calculation works for the 3-spool as well according to the article:

The added assumption that the LP turbine is choked, makes the three-spool case exactly similar to a twin- spool engine. The design point calculations are nearly the same as those for the twin spool. So one can effectively use the same program for three-spool and twin- spool engines, with the only difference that the inter- turbine and inter-compressor temperatures and pressures calculated will be totally different from the actual values.

Meaning that the model will create good results for the overall parameters even though some of the internal parameters won't match. Figure 7. then gives the mass flow as a function of hot and cold thrust for the RB211 engine: 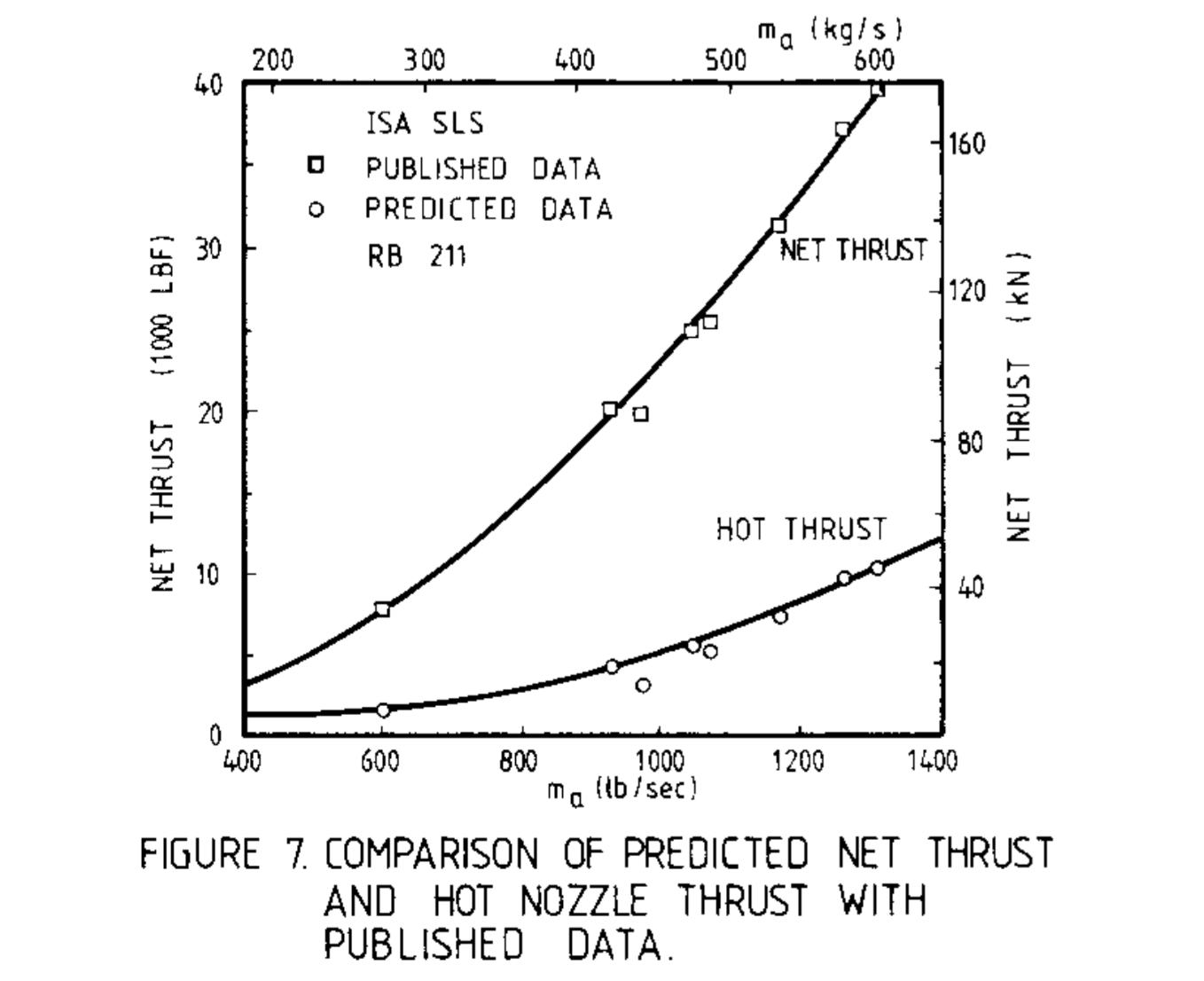 So without going through the detailed procedures for the OP specific engine, above gives data for a comparable engine class.

1
Is it possible to determine the mass flow rate through the engine of MiG-21 during its various cruise Mach no. operations?

1
Is it possible to determine the mass flow rate through the engine of MiG-21 during its various cruise Mach no. operations?
13
Why do jet engines take a long time to throttle down?
14
Why does fuel consumption decrease with increasing aircraft altitude?
0
How do I estimate how much air flows through the intake due to engine suction?
4
How are Cd and Cl calculated from Cp data?
1
Is this Corrected Mass Flow equation correct?
12
How (and why) does engine thrust change with airspeed?