Why was the boat mounted this way on the underside of the wing on the "Landseaire" flying yacht?

After seeing the below image of the "Landseaire" flying yacht here I was curious to know why the small boat mounted to the underside of the plane was mounted the way it was. At least to me (and @Dave who mentioned it in his answer containing this picture), I found it interesting that the boat would be mounted "backwards" and also so far from the body of the aircraft. Can someone explain why this position and orientation was necessary or why it was chosen? 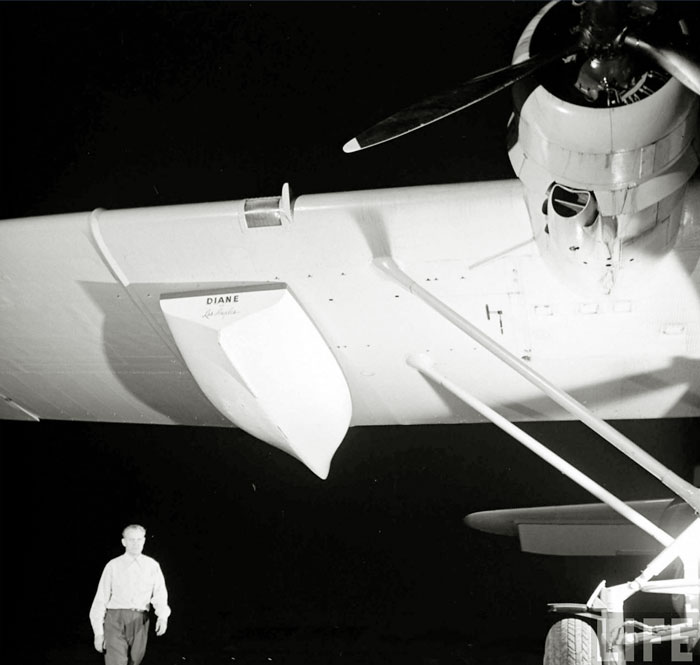 The reason is the "flat tail" of the boat. The drag this "flat tail" produces when mounted "reverse" is much less then the dynamic drag it would induce the other way around.

I don't see how the link helps explain why the flat side produces less drag than the pointed side.– Ron Beyer

The published cw coefficients (see answer of @jwzumwalt ) show the best value for the drop shape facing towards the air stream.

There is no entry for a reversed drop. But it is evident that is would have a higher cw coefficient.

A closer look at the boat reveals it also has a drop shape. But this is facing to its tail. Therefore the boat creates less drag when mounted "reverse".

If this was the case, wouldn't the boat cause less drag moving backwards through the water also? – andy-m

It might but the usually draft of the boat is no so deep that a relevant part of the "flat tail" is actually in the water. 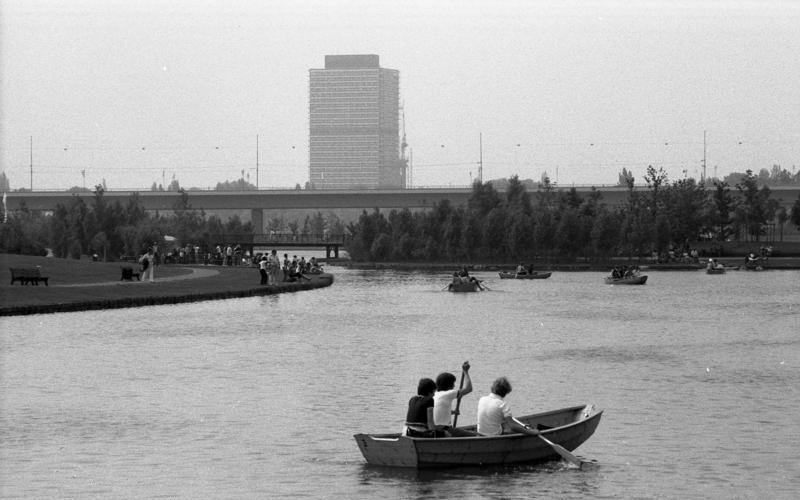 On the other hand a little turbulences at the boats tail could help to keep direction in the absence of a steering paddel...

This explanation is wrong - an anemometer spins with the forward facing blunt half of the hemisphere causing the most drag - en.wikipedia.org/wiki/Anemometer – jwzumwalt

With regards to the lesser question as to why it is mounted so far from the body, in this case it's actually the only available place; the Catalina is amphibious so mounting it on the fuselage/hull would cause issues with off-water operations. The internal structure of the wing also needs to be considered: the boat can only be attached were there is a structural hard point, and some method of releasing the boat. In this case, the boat is mounted where the underwing stores would normally be fitted, so there's already a release mechanism and internal supporting structure: underwing.jpg

As for the primary question, my phd is in hypersonic design so I'm a little fuzzy on subsonics, but although mounting the boat backwards increases frontal drag, having the sharp prow facing aft reduces flow separation. flow separation reduces pressure drag This would help to reduce wake turbulence and reduce buffeting over the tail. Possibly it also minimises disturbances in the prop wash, since the boat is mounted so close to the engine. In this case, although the flat front isn't optimal for drag, the whole boat is shaped more like a tear drop fairing, with a sharper trailing edge. Without wind tunnel data or cfd analysis to back up this theory, it is only my surmising: as others have stated, it could simply be the contour of the boat matched the wing better that way.

The attachment of the boat as seen in the picture to reduce drag might seem to be common sense. However truth is sometimes stranger than fiction. We are given the drag of various 2d and 3d objects on page 3-17 of "Fluid-Dynamic-Drag" by Hoerner.

If the intent was to reduce drag, the designers or mechanics who installed the boat without wind tunnel data got it wrong! But, it is also possible the boat is situated in that direction due to the prow being higher and fitting the wing camber better. The boat does appear to match the camber quite well. Note the curve of the boat rail in the other picture.

We can look at a real world example and see that the wind tunnel data is correct. Hoerner in the same book provides Cd for various "boat tail" bullet shapes and they also have the least drag with the blunt end trailing. Bullets could use a different shape than we are accustom to, but tests show a bullet with a sharp point and blunt rear have the least Cd.

An anemometer spins because the forward facing blunt half of the hemisphere has the most drag, meaning the boat is in the wrong direction for the least drag - https://en.wikipedia.org/wiki/Anemometer

Note the triangular shape with its sharp corners is also counter-intuitive to what we would normally expect.

I think the drag chart accurately depicts the boats drag. What appears to be causing a misunderstanding is we normally find a forward facing blunt blended body to have the least drag, however in this instance the boat has sharp corners that can "trip" the otherwise smooth flow. The sharp corners make this an exception to the rule as depicted in the drag chart. 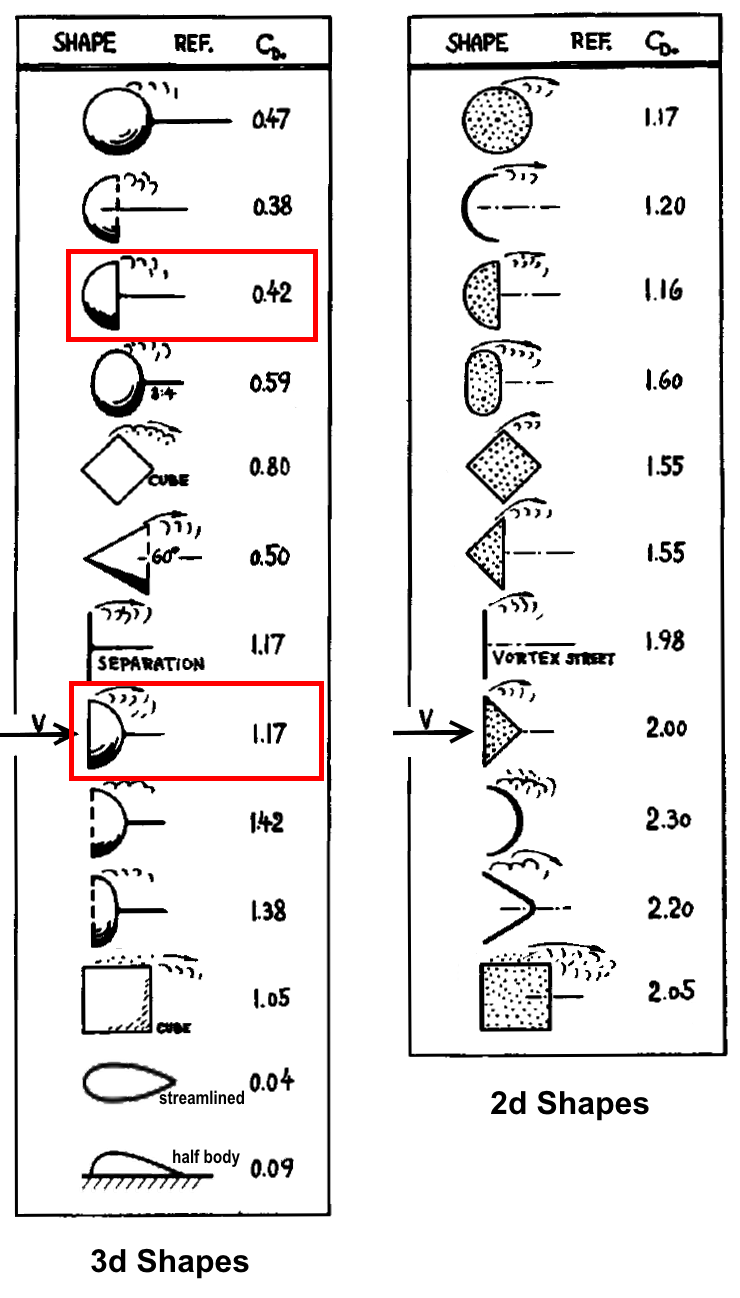 As for why is at that position, the answer seems simple- there is where the hardpoints for bombs and torpedoes are- so mounting the dinghies that makes sense, both from structural and maintenance point. From the linked article:

Slung under each wing, where bombs and torpedoes used to hang, are two 14-ft dinghies.

As for the orientation, it looks like it was selected so that the boat fits snugly against the underside of the wing. It is repeatedly alluded to in multiple articles:

Each boat fits snugly against the wing and is raised or lowered by a built-in electric hoist.

The Landseaire had 14-foot dinghies under each wing, hoisted to fit flush by cables that had once lifted torpedoes and bombs ... 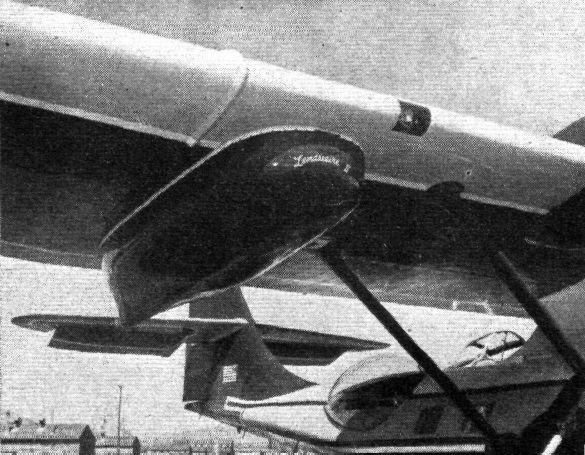 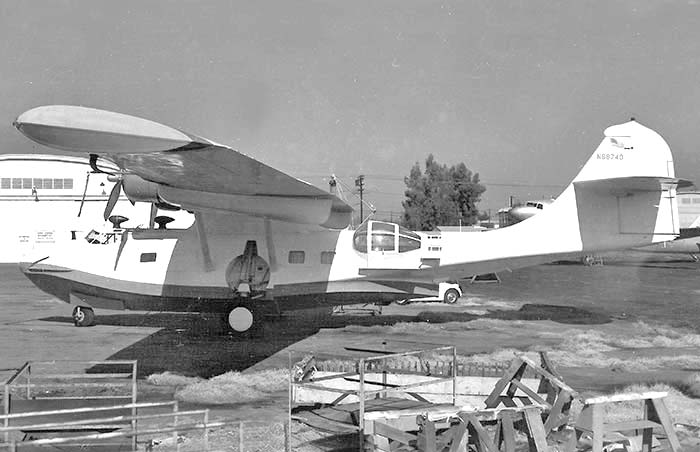 N68740 at Ontario, California in April 1957 as a "Landseaire"executive air yacht conversion;image from Ed Coates Collection

Fundamentally this question is related to Reynolds number and dynamic similarity.

In order for the flow about two similar geometrical shapes to be similar and thus for their drag coefficient $C_D$ to be similar both the respective flows' Reynolds numbers $Re$ and Mach numbers $M$ must be the same. Mach number is related to compressibility and for the case at hand (subsonic aircraft and boat) compressibility effects are negligible, so lets focus on $Re$.

Reynolds number is essentially the ratio of inertial to viscous or friction forces present in a flow: $$Re=\frac{\text{Inertial forces}}{\text{Viscous/friction forces}} \: .$$

Reynolds number is a function of the body (in this case boat) length, the speed of the flow and the viscosity (thickness/stickiness) of the fluid.

Lets estimate $Re$ for the boat in the water and mounted to the aircraft wing:

Assuming the boat is about $3m$ long and moves in the water at $2m/s$, and assuming the aircraft cruises at $200$ km/h at $10\:000$ ft, we can estimate $Re$ using this handy calculator and the fluid properties of water and air found here (you could also just do it by hand, its an easy formula).

It is found that:

Based on this, the same streamlining and drag reduction principles should hold and they would probably have been better off placing the boat the other way, i.e. the same orientation as it is made to be streamline in water.

It might however be that they simply placed it that way because it was easier to mount, as opposed to any aerodynamic reasons.

PS: I was half expecting the $Re$ of the boat mounted to the aircraft to be a lot higher than in the water, in which case I would have made the point that if the $Re$ of a body immersed in a flow is vastly different, the same streamlining principles would not hold, although in this case it would seem that they do.

If the boat was the other way round, it may produce some lift of its own, causing the wing to be pulled downwards, or may have an effect of the lift produced by the upper surface of the wing, refusing lift in that way. Making the airflow turbulent under the wing reduces the tendency for the pressure to drop.

This boat is subject to sub-sonic aerodynamics in the region where compressibility effects are negligible. In this region, streamlined bodies are teardrop shaped with a round front providing forces and a tapered rear to avoid separation bubbles and concomitant drag.

The boat has no rounded ends. So put its tapered end aft, to exploit one of the two properties of subsonic streamlined bodies.

And the stern has partially a rounded shape, which helps with streamlining when in front, not in rear. The flat surface does not help either in front or in rear.

So without knowing the exact Cd from wind tunnel measurements or CFD, the boat likely has least resistance with the bow pointing backwards.

The boat and the wing can be considered together, as one aerodynamic form. The stern (of the boat) is in a region where wing AOA slows the relative airstream the most.

For this particular boat/wing combination, the way they have it mounted would produce the least amount of drag.

Not the answer you're looking for? Browse other questions tagged aircraft-design aerodynamics aircraft-performance seaplane or ask your own question.

33
Do any aircraft carry boats?
50
How complete is our understanding of lift?
54
Is it possible to install a bike rack on a Cessna 172?
26
Is there an aerofoil that gives reasonably good lift for both air flow directions: forward and backward?

2
Regarding the 1902 Wright glider. Why is the airspeed, Va, calculated adding the ground speed, Vg, and wind speed, Vw?
7
What is the way to calculate the required twist of a flying wing?
20
What is this flying boat being restored at the Udvar Hazy Center?
3
How does maximum speed vary with altitude?
0
What flying boat has the highest maximum takeoff/landing sea state?
2
Could this helicopter's body be a flying wing?
2
Why do the two different "ground effect"s used by aircraft and automobiles do opposite things in almost the same conditions?
13
Why are the guns on the AC-130 not mounted on the underside of the aircraft?
24
What is this part which is mounted on the wing of Embraer ERJ-145?
0
Why aren't HLFC panels mounted on wing?