Brace position - does it really save lives?

There are some people say the brace position was invented so that passengers don't experience pain when they die in a crash. The brace is designed so that you die quicker (by breaking your neck).

Is that true? If not, how does it provide better protection during a crash?

There are a number of reasons the brace position is recommended.

The FAA has a study on it you can find here the study is worth reading completely but the important parts of the conclusion seem to be,

This position (head against the seat back, hands on top of the seat back) was evaluated for three common types of seat backs.

This position was only successful for locked-out type seat backs. For full break-over and energy absorbing type seat backs, the ATD’s arms pushed the seat back away, allowing the head to accelerate relative to the seat back, increasing the severity of the head impact. There was, however, no evidence that the ATD interaction with any of the seatback types resulted in hyper-extension of the shoulder joint. 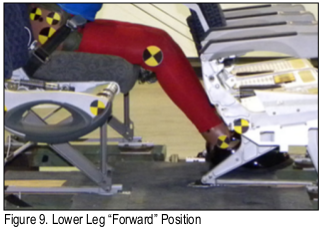 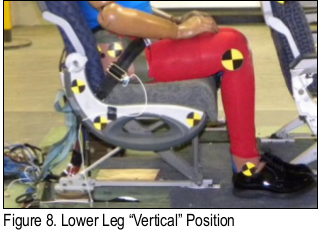 The “Forward” and “Vertical” leg brace positions permitted the lower legs to flail forward and contact the seat in front. This contact produced femur bending and compression (below criteria limits), and tibia injury risk in some cases. 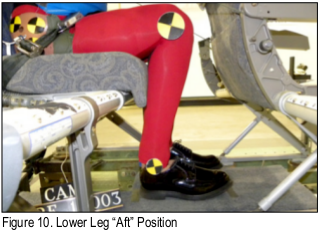 The “Aft” leg brace position reduced lower leg flailing and prevented femur contact with the front of the seat frame. This position resulted in low femur and tibia injury assessment values; however, it is only achievable for occupants whose lower legs are long enough for their feet to firmly touch the floor.

To reduce the detrimental interaction between the occupant’s arms and the seatback, the current position was modified by placing the hands down by the lower legs instead of on the seat back. 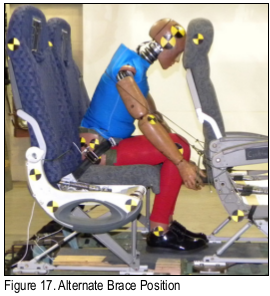 This “Alternate” position was successful in reducing head and neck injury risk for all of the seat back types evaluated.

This position is currently recommended when the seat in front is too far away to support the head, or there is no seat in front, as in a bulkhead row. 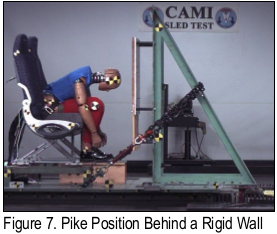 It was successful in reducing head and neck injury risk in the row-to-row scenario, as long as the struck seat back has a relatively soft local compliance at the point of impact. When seated behind a bulkhead, the effectiveness of the pike position was dependent on whether the head of the occupant struck the bulkhead. “Head-path-reducing features,” such as Y-belts, prevented head contact at the typical 35-in setback.

So the answer is really, it depends on the position as well as the seats in question. You find a full explanation of what the various seat types are on page 2 of the study.

Perhaps the most interesting note is that they call for a potential change in the current brace position:

...and the current positions recommended in AC 121-24B may need some adjustment to provide an equivalent level of safety for all passenger seat back types.

Not the answer you're looking for? Browse other questions tagged accidents emergency-procedures accident-statistics or ask your own question.

25
Piloting as a perishable skill - what skills go first and how to self-assess and mitigate skill loss?
10
In this 2nd brace position, should your head lean against the seat in front?
31
Could someone really die in the way that Goose did in the movie “Top Gun”?
22
Should landing light be off during line up and wait position?
12
Are emergency actions an appropriate part of a captain's briefing in a light aircraft?
9
Do flight attendants have a regulatory responsibility to risk their own lives to save passengers?
3
Can a runway turnpad be used as a runway holding position?
19
What is the brace position for cockpit crew?