For any given modern turbofan engine, does bypass ratio stay approximately constant during a typical flight?

If it does not stay virtually constant, what are the driving factors?

There are two factors that determine the bypass ratio (or rather, how it may change):

The compressor acts like a pump, increasing the pressure of the air, whether it's sucking at the intake like in takeoff, or RAM feed, such as in cruise flight. Also like a pump, the faster a spool (compressor) spins, the larger the mass flow it pumps (creates). So, if we consider a CFM56-7B engine for example, its shaft speeds at 100% are 5,175 rpm for N1 and 14,417 rpm for N2. That's a ratio of 2.78. At takeoff, the engine will be close to this condition. But at cruise thrust at 35,000ft, the engine will be throttled back. What tends to happen in a gas turbine, is the N1 spool slows down relatively more than N2, as the throttle is reduced. So at cruise, N1 is maybe 3,880 rpm (75%), while N2 is maybe 11,534 rpm (80%). The ratio between them is now 3.41. The pumping capacity of the core has only reduced 20% from the takeoff condition, while the pumping capacity of the fan has reduced 25%. Hence, the bypass ratio will be lower at cruise than at takeoff.

Now, my values of 80% and 75% at cruise are just suggestions. But it is to illustrate the point, that if the ratio between the rpm of the two spools change, the bypass ratio will change.

{Why is the N2 operating range less than the N1 range?: The CFM56 engine has a single stage fan, and depending on the model, either a 3 or 4 stage booster (or LPC), with a 9 stage HPC. These compressors are making the air flow in the direction of increasing pressure. The air doesn't really want to do that. So, if the design tries to increase the pressure ratio per stage too much, the blade is likely to stall. Getting aerodynamic conditions which avoid stall for the first stage, and the last stage, for the same operating condition is difficult. It's even harder when there are 9 stages on the shaft, than 3 or 4 (plus a fan). So the range of conditions that a 9 stage compressor will operate over is generally less than the range of conditions that a 3 or 4 stage compressor will operate over.}

Mass flow rate is obtained as

The bypass ratio is then

This leaves us with

but $\frac{A_{bypass}}{A_{core}}$ is constant, because the geometry of the engine is generally not variable in an airliner.

Assumptions that I deem reasonable:

This last assumption means that I assume that the engine is working at or near its design point, as mentioned in the comments, changing the fan speed will affect the velocity distribution after the fan, and thus the BPR. This mostly happens only during take-off or landing, while the vast majority of the flight is usually cruise, where the assumption is generally satisfied.

(*) Note how the book, in the following chapter, explains that the BPR is a fundamental design parameter. And a few pages earlier (page 125) it shows how an engine would be designed starting from some requirements, and these include a specific (not variable) BPR. This is because engines are primarily designed around the conditions in which they work for the longest time, i.e. cruise.

The bypass ratio is optimised for the cruise, which is the design point, and it changes with changing eternal conditions. Off-design, the bypass ratio changes:

The book Gas Turbine Theory by Saravanamuttoo-Rogers-Cohen contains a section on determining off design procedures of the turbofan. From section 9.4:

The approach described in section 9.2 is also applicable to turbofans, but in this case we must take into account the division of flow between the bypass duct and the gas generator, which will vary with off-design operating conditions.

Bypass characteristic is contained in the following figure, also from the book. 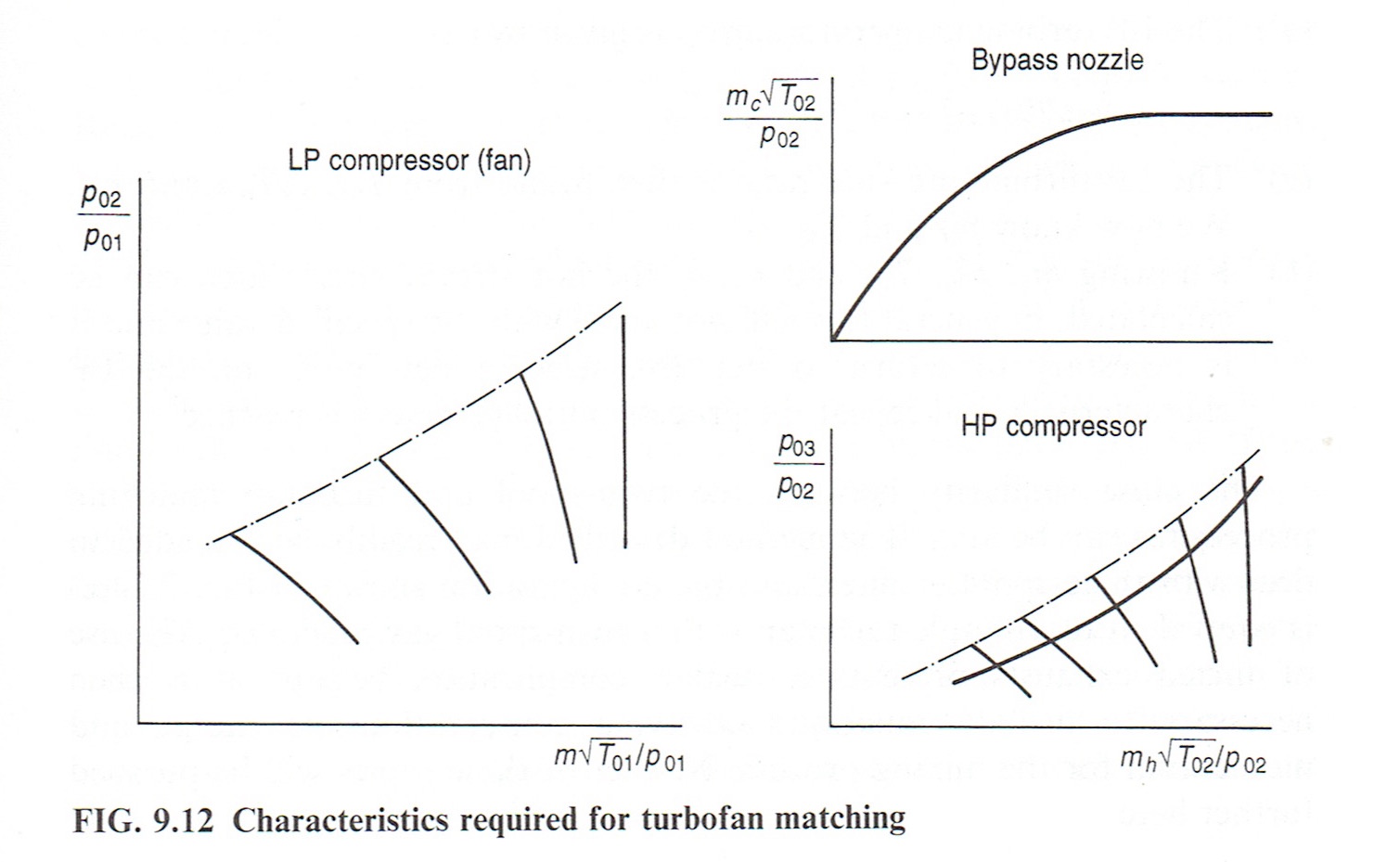 Input parameters for the procedure are pressure and temperature at the entry of the LP compressor, and the bypass ratio therefore also changes during climb in cruise. These two parameters change as a function of:

This answers the second part of OP question If it does not stay virtually constant, what are the driving factors?

Note that the book also contains a worked out example on a twin spool turbofan - from example 32 on page 123 and further:

In both cases the area can be calculated from continuity, i.e. $m = \rho A C$. The density is obtained from $\rho = p/RT$, where $p$ and $T$ are the static values in the plane of the nozzle;

Density $\rho$ is a function of pressure and temperature, and statements on density and velocity anywhere in the engine cannot be made without also considering $p$ and $T$, which the book does of course.

9
What are the advantages and disadvantages of mixing the bypass flow with the core flow?
6
What are the mass flow rate and exhaust velocity for a CF6 or GE90 turbofan?
0
How do I estimate how much air flows through the intake due to engine suction?
4
How do aircraft engine manufacturers achieve a higher bypass ratio while still meeting the thrust requirements for a given aircraft?
6
What effect would a afterburner have on the compressor if the nozzle outlet is not increased?
4
Why are most turbofans tractors, but most propfans pushers?
4
How difficult is it to design a high bypass turbofan given a military derived core?
0
On a bypass engine does the bypass air travel faster or slower than core air?
7
How will the Rolls Royce UltraFan provide reverse thrust?