Is there any form of checklist that a pilot needs to go through before they use their ejection seat?

Obviously, the use of an ejection seat is a last resort tactic but is there anything at all that a pilot must consider, any buttons they need to hit or something similar before they may eject?

Yes there are checklists but a lot of the training is done by practice exercises so the procedure becomes instinctive during an emergency.

The exact procedures to be used vary based upon airframe, cockpit configuration, and ejection seat make and model. Here are two examples, one from the F-16A/B aircraft and the other from the F/A-18E/F aircraft.

From the F-16 USAF Flight Manual. 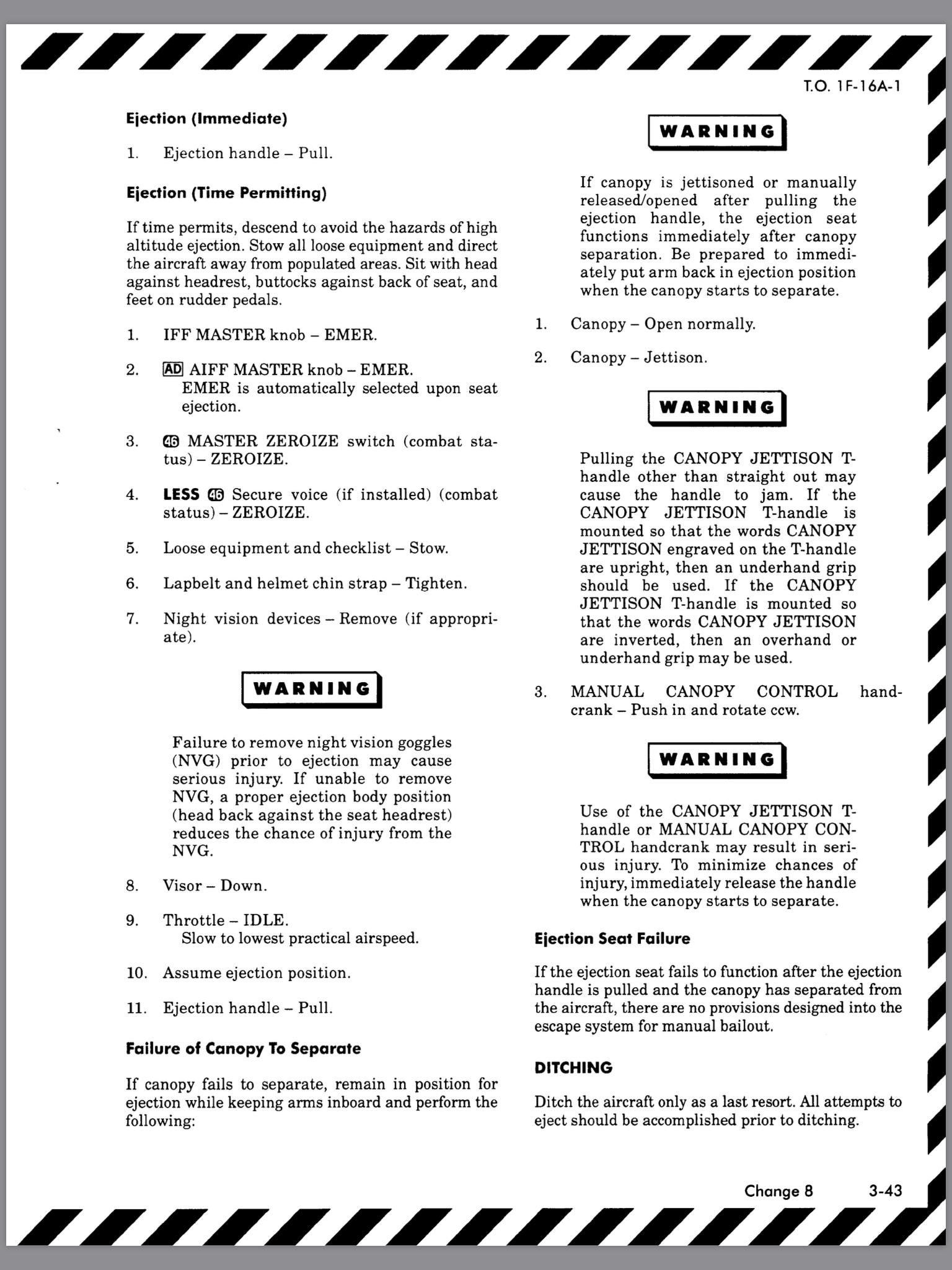 And from the F-18 NATOPS Manual. 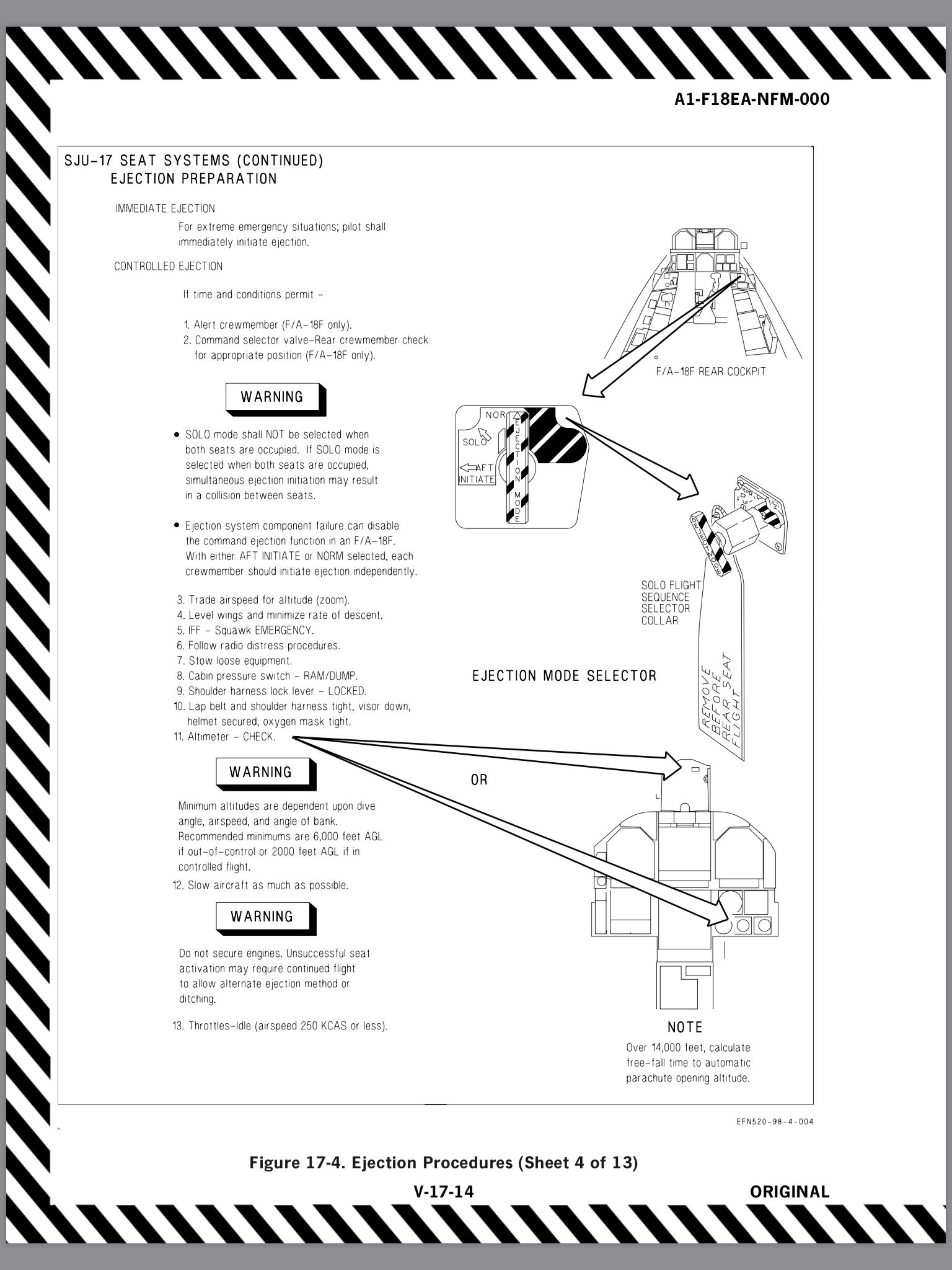 Again there are a lot of mitigating factors here, specifically, airspeed, altitude, attitude, aircraft controllability and imminent danger to the flight crew which must be taken into consideration to order to make the decision to eject. Since an ejection seat is nothing more than a device to provide an additional velocity vector to the aircrew in order to provide time for the main parachute to open and safely lower the occupant to the ground, they have specific altitude, airspeed and attitude envelopes in which they may be operated to ensure maximum chance of aircrew survival. This should be reviewed and thoroughly understood by the aircrew prior to use.

There have been a few instances where the seat was used outside of the envelope. One notable instance being Soviet test pilot Anatoli Kobachev when he punched out of a MiG-29 during a low altitude, high AOA pass at the 1989 Paris Air Show. His delay was to direct the stricken aircraft away from the crowds and very fortunate that he didn’t die. He walked away from the accident.

The checklists above should be used only IF TIME AND WORKLOAD PERMIT. Again flight crews practice ejection procedures separate from aircraft operation in order to become uncounsciously competent in the operation of the seat. They typically order the cockpit and workstations for aircraft egress prior to situation where there is an increased probability of needing to abandon a disabled aircraft. These include takeoff, landing, and entering a theater of combat, etc. Checklists will be use here prior to these events and crews will probably brief ejection procedures here as well. Carrier operations, in partcular will have crews ready to eject at a moments notice and anticipating emergencies such as a cold cat shot or arresting gear failure during launch and recovery operations, both of which will probably require an immediate ejection to save the lives of the aircrew.

Correct cockpit preflight procedures must be done by the aircrews prior to operations to ensure safe ejection as well. Crew must attach the leg restraints as well as correct attachment of life support umbilicals such as oxygen, anti-G, radio and HMCS data lines to ensure they separate properly during ejection without causing serious injury or death. Shoulder straps must be attached into the occupant’s parachute harness to connect them with the seat’s recovery parachute (some seats do not have this; the pilot will wear a separate parachute system as part of their life support garb in this case). Charts, kneeboards and other foreign objects must be placed such that they do not interfere with the operation of the ejection handles or the seat safing handles.

The ejection process again is going to be based upon the cockpit configuration and seat type, but typically if the aircraft commander says EJECT! EJECT! EJECT!, you will pull your legs and extremities clear of the legwells and flight controls, head back against the seat headrest, grasp the ejection handles, disengaging the grip safeties and PULL HARD. The ejection itself will happen fast and very violent with a BANG! BANG! The canopies will either break away with a pyrotechnic charge or be fractured with a similar charge sounding like a shotgun blast at close range. This is followed a split second later with a jolt and explosion as the pneumatic catapult throws you clear of the cockpit and the seat rocket motor ignites, giving you an approx. 20g acceleration clear of the cockpit. After this, the recovery process becomes pretty automatic. Air data sensors feeding a small computer in the seat right the occupant using a drogue chute, followed by seat frame separation and deployment of the main recovery parachute. The pilot may be required th pull an additional handle for deployment of the seat pan and life raft for a water egress as well.

Wind blast will be a major factor and all material suggests that an ejection be intitiated at the lowest airspeed, if possible. High speed ejections will invariably result in serious injuries as due to wind blast, as this chart from an F-16 flight ops manual suggests. 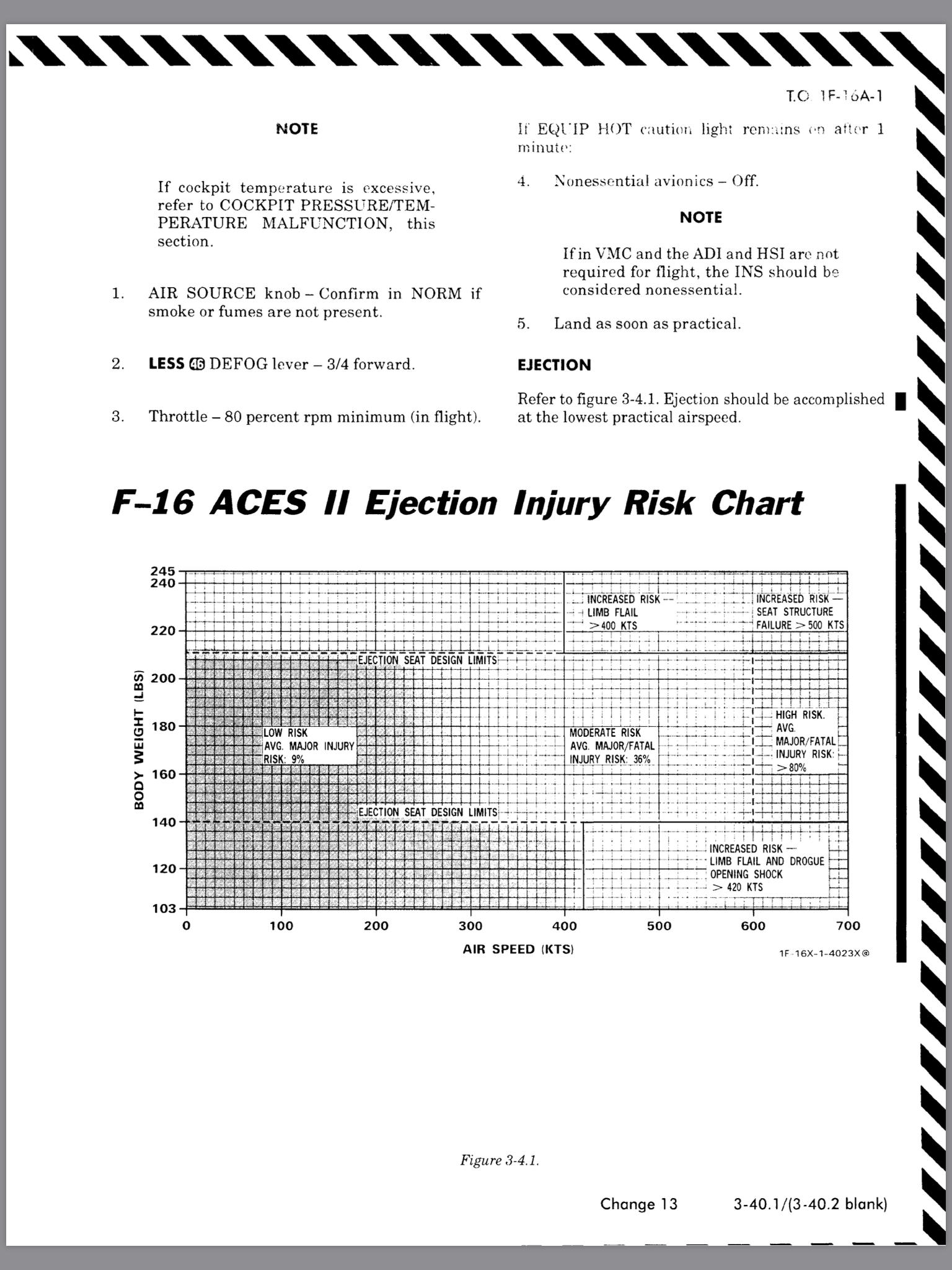 Ejection at supersonic speeds is usually fatal, with very few exceptions. This pilot was very fortunate to survive a supersonic ejection, but was seriously injured in the process.

With a couple extra seconds, the drill was to get into a good tight body position with the helmet back against the headrest (looking straight ahead -- straight spine), feet tucked back against the seat, elbows in, hands on the handgrips, and then boom.

In the case when you had more time there was a "controlled bailout checklist". That could come into play in situations like having one main gear stuck down & another stuck up, which is considered an "un-landable configuration" in the T-38, since you'd tumble shortly after touchdown. That checklist had a few more steps to it, like taking off the checklist that was velcro-ed on your leg, take pens out of your pocket, tighten your chin strap & oxygen mask, go to the controlled bailout area (essentially someplace with no civilization close by for the jet to crash into, but terrain you could probably survive landing on), slow to some prescribed speed, throttles to idle, trim for your glide speed, assume the body position, and then "Handgrips Raise."

Oh, and tell ATC what you were about to go do... they can send a helo to pick you up much faster that way!

0
Are there any cases where the back-seat pilot is the only one who can cause both ejections seats to fire?
4
How is the hazard from a malfunctioned ejection seat system handled?