Does a plane have more lift while flying in a cloud? (All other things equal...)

Inside a cloud, the plane flies in a medium (air + water droplets) with a higher density than 'normal' air. If airspeed and AoA are the same, lift should be higher. It is really so...?

No, higher humidity air is less dense than lower humidity air. This is because water molecules are lighter than the nitrogen and oxygen they would replace in an airmass.

If we consider droplets "floating" in the air, they should hit the wings at the angle of attack and provide some lift. As they are more dense than the air, the lift should be more that just hitting the amount of air that could substitute the droplets.

There are also other effects like humid air is less dense and if the droplets are large enough to fall they should hit horizontal surfaces, pushing down. The overall effect depends on all these factors and may be complex to define.

No, or at least not lift due to the airfoil (see below). The difference between the air inside of a cloud and that directly adjoining it will be relatively small. Also, the air inside a cloud is less dense in most cases than the surrounding air because it is warmer. The following diagram illustrates the effect: 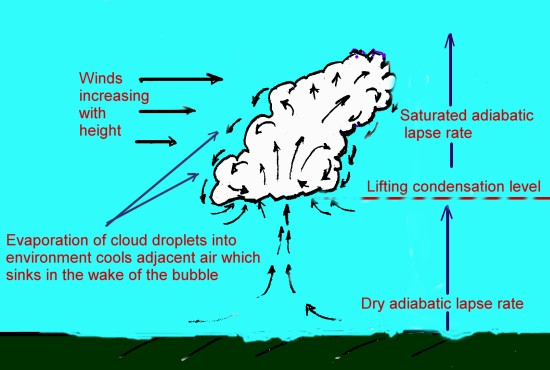 The air outside the cloud is cooler and more dense. The air inside of a cloud, therefore rises, and outside of it, the air sinks. Any glider pilot experiences when passing beneath a cloud: the glider rises as it travels under the cloud, but as soon as it exits the area under the cloud, the glider sinks.

An aircraft will experience lift inside of a cloud, but this is due to rising thermal air currents, not lift granted by the wing's airfoil.

3
What is the relation between airspeed and generated heat at constant drag?
2
How to calculate aileron deflection for achieving similar roll dynamics at thin and dense air?
10
Why do delta wings generate less lift at a particular angle of attack compared to straight wings?
0
Pressure Distribution Pattern around Wing
5
Do leading edge flaps increase the critical angle of attack?
17
How do planes maintain constant speeds at cruise altitudes?
8
Why does Vr increase with lower air density and decrease with higher air density?