Why mount multiple autocannons on a fighter or CAS aircraft as opposed to a revolving barrel auto-cannon with a higher rate of fire?

Why would one design an aircraft with multiple chain guns instead of a single large rotary cannon, like the GAU-8 Avenger, and similar weapons? 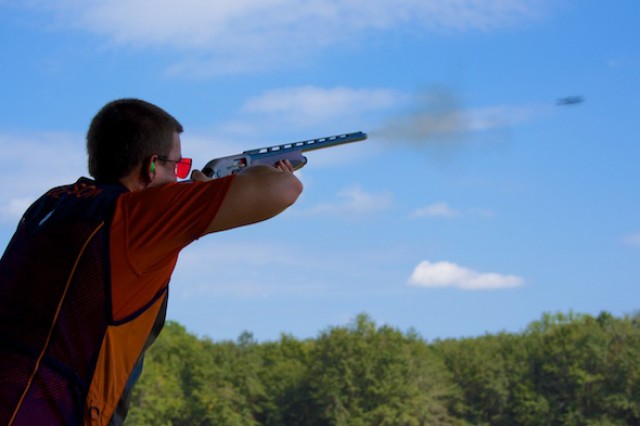 Same difference as between a shotgun and a rifle: if you need to hit a moving target, like a clay trap target or pigeon or aircraft, it's best to spread the projectiles out so that there is more of a chance that the target meets them. If however the target is (almost) stationary, nothing beats lining up carefully and inflicting the maximum damage with the projectile.

Heavy machine guns are mounted on swivels to create an effective area instead of a line, and only one bullet would be required to stop a soldier. A trap shooter swivels while overtaking the spinning disk, thereby spreading out the spray of shot. But an A-10 lining up for a tank kill wants to maximise impact upon this one tank only - just the one bullet landing anywhere on an armoured tank may not do the job.

When multiple cannons/machine guns are mounted across the wings, the aircraft is set up for dogfighting. Which they are not designed for anymore.

A gatling type gun takes a certain period of time to reach it's designed rate of fire. The M61 20mm gun takes about 0.5 second to reach 6000 rounds per minute, which means that during the first half second only about 25 rounds are fired, whereas a battery of four revolver cannon each firing at 1200 RPM would fire 40 rounds in the first 0.5 second.

One reason could be :

The only advantage would be redundancy. If one gun jams, you still have others which can fire. The primariy disadvantage to a multi gun scheme is weight. A single gun has one action, receiver, magazine, and ammunition feed system, where is multiple guns will each require those components for each of them. Multiple barrels on a single gun solves the problem of a rapid fire action while providing cooling of the barrels during operation. Multiple guns also consume more space inside of the aircraft, which limits additional real estate for things like fuel, mission systems etc.

Additionally, you’re not really using the right terms there. Miniguns were a trademark of General Electric, which developed a scaled down version of their rotary cannons chambered for the 7.62 x 51mm rifle cartridge for use on gunships. GE also manufactured a variety of rotary cannons of varying calibers for use on aircraft, including the M-61A1, GAU-8/A, and others.

On a fighter, you'd mount multiple guns if the high speed rotary gun hadn't been invented yet, which was the case in WW2.

The rotary gun is lighter that multiple guns, takes up less space, has a higher rate of fire, and is more accurate than multiple guns firing at a slower rate.

WW2 guns were typically wing mounted, and all guns set to converge at a fixed point, typically around 200 yards. If the fighter pilot shot at a plane not at that point, a good deal of the bullets would miss.

Even with the few planes that had centrally mounted guns like the P38 and ME110, the recoil of the individual guns would cause their aim to diverge, though it wasn't as pronounced as wing mounted guns. Some F86 pilots in Korea added reinforcements to the mounts for their six Browning M2's in the nose, to keep them from moving so much while firing and improving their accuracy.

The single high speed gun puts all the bullets in the same place, regardless of distance. Given the difficulty in getting another aircraft in one's sights, the ability to inflict a much higher level of damage in a short period of time is a real advantage.

For CAS, especially helicopters, slower rates of fire stretch out the ammunition supply, for softer targets that don't require a huge amount of damage in a short period of time. After all, a soldier is just as dead whether they get hit by two bullets, or two hundred. Note that this is for dedicated CAS helicopters that are expected to loiter near the combat area for long periods of time.

When the potential target becomes hardened, like a tank, then the GAU8 at it's full speed does what the CAS pilot wants: puts the maximum destruction in one spot, in the minimum time.

Some helicopters, such as the MH53, come with a single 7.62 rotary gun in the back, but it's job is not continued CAS, but suppression when inserting or removing troops from a hot LZ, which is done as quickly as possible, and then the helicopter departs the combat zone. A stream of bullets from a rotary cannon tends to make soldiers seek cover, and stop firing at you.

One other CAS aircraft that uses rotary guns is the AC130. It is expected to loiter for long periods of time, but the AC130 can carry a lot of ammunition, so running out isn't as much of a concern as it is with a load limited helicopter.

Not the answer you're looking for? Browse other questions tagged military jet fighter or ask your own question.

97
Why do fighter jets still have guns/cannons?
4
How were fighter jets built in the 1950's?
11
Do fighters or bombers ever ditch their weapons?
27
Does the cannon of the A-10 deliver more thrust than the engines do?
14
Why don't single-engine jets suffer severe gyroscopic effects?
9
How effective was WWII bombers self defense anti-air armament?
4
With similar weapons why does an AH64 Apache require a pilot and gunner when the A10 Warthog only needs a pilot?
6
Is the A-10's cannon effective against tanks?
25
Why don't combat aircraft have rear-facing *laser* weapons?
3
As at 2020, why don't fighter jets have ≥ 200 rounds for their cannons?