In flight simulator X-Plane 8.15, the F-4 Phantom 2 can fold the tip of its wings (well, variable sweep). Is that useful? Why would a pilot fold the wing? To reduce lift for short landing?

As several of the comments have mentioned, the F-4 have the option of folding the outermost section of their wings, as shown in the picture below. 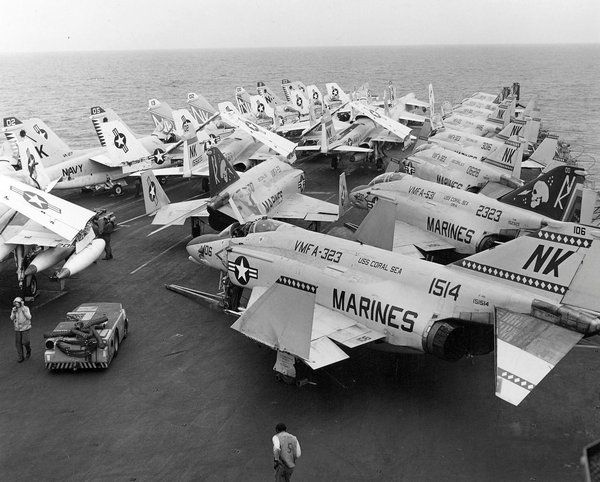 The main purpose of this was simply to save precious space on aircraft carriers, it had no use when flying. There have been some incidents where wings have either started to fold during flight or where the pilot forgot to unfold before takeoff, but it was not designed for this. Many other naval aircraft have the option of folding their wings in a similar manner, such as the F/A-18.

The A-7 Corsair II and the F-8 Crusader also had wing folding, but in addition they could also adjust the attitude of the wing while flying, primarily to improve visibility for the pilot when landing as seen below. 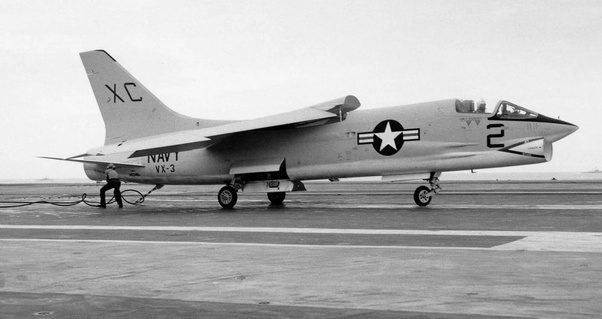 In U.S. Navy and Marine Corps F-4 Phantoms, the wing fold mechanism was controlled and powered by hydraulics, since the pilot had to fold the wings after landing for taxiing around on the deck. The USAF versions of the Phantom, on the other hand, had this hydraulic capability removed, and there was a pin in the top of the wing, (if I recall), just inboard of the wing fold, which, if it was protruding, indicated that the wing fold was unlocked. It was, obviously, a critical pre-flight step to check that this pin was flush, not protruding.

There was at least one incident where the aircrew failed to notice that the pin was protruding, and took off anyway. Needless to say, the wing folded shortly after rotation and liftoff, with catastrophic results.

On our RF-4C's the pilot could not fold the wings the crew chief had to do it. It was part of the 25 hour check to fold them and inspect and lube them.

Not the answer you're looking for? Browse other questions tagged wing fighter winglets folding-wings f-4 or ask your own question.

19
Can any aircraft adjust the wing dihedral in flight?

14
Do some light sport aircraft have clipped wings to lower their cruise speed?
12
Why weren't the XB-70's wingtips fixed in the down position?
7
Why are the wings of some planes changing width?
4
Why do some aircraft have symmetrical tip airfoils while others do not?
28
Why do the wing tips on the Boeing 777X fold up instead of down?
6
What are the limitations to adding wings with engines to a helicopter?
3
Why was Energy Maneuverability theory not applied to the F-14?
17
Why does the F-15 have a swept-back trailing edge at its wing tips?