None of them are VTOL aircraft.

Why didn't VTOL aircraft achieve much popularity with aircraft carriers?

VTOL (and STOVL) are concepts which were conceived as a result of not having large aircraft carriers or the space for a long runway. The primary feature of these aircraft is to enable them to take off and land using a minimum of runway distance, but in order to achieve this compromises have been made with the designs. This affects several aspects of the aircraft; complexity goes up as it requires at minimum additional controls for low-speed maneuvers where traditional control surfaces are inefficient and some way to distribute the thrust or add thrust to balance when flying vertically.

This tends to add weight and occupy internal volume which could otherwise be used for other things, such as fuel. It drives complexity when flying the aircraft and also in terms of maintenance, and thus cost.

Take the F-35 as an example. There are three models of a single design, where the A-model is designed to operate from regular air bases on land, the B-model for VTOL operations on amphibious attack ships or forward air bases, and the C-model for regular aircraft carriers. Compared to the other two models, the B-model has less internal fuel and a lower max takeoff weight. Because of this it will be required to refuel more often and/or carry less payload, which in turn will drive the complexity of operating the aircraft due to the logistics.

Another issue with VTOL airplanes, is that they (as far as I can tell) haven't been designed to takeoff vertically with a full fuel load and carrying a full payload. I could not find any numbers for the F-35, but for the AV-8B+ Harrier the max vertical take-off weight is around 9,5 tons, while a rolling take-off increases this to 14 tons. ([Wikipedia])1 This is quite a difference, and it shows how much you sacrifice to be able to do a vertical takeoff.

While having the option of VTOL is nice, cost is generally what drives decisions (even in the military). An AV-8 cost around \$19.000 USD to operate per hour, according to DefenceIssues. While older than eg. a JAS-39 Gripen (age tends to drive costs upwards), the Gripen which is of a similar size and empty weight has a longer range and only cost $4.700 USD per hour to operate. And according to the source that number is high, as labor costs more in Europe than in the US.

Use on aircraft carriers

While some VTOL aircraft have been developed, the reason for why they aren't used more is related to everything above. Many of the non-VTOL carrier aircraft used today have a basis in aircraft originally designed to operate from land-bases using regular runways. If you decide to use VTOL aircraft on an aircraft carrier, the carrier can generally be smaller than a carrier operating STOL or catapult-launched aircraft, but this will also affect how you can use the carrier.

bjelleklang gives a comprehensive answer. But to make one point, in relation to your statement "why didn't we see many VTOL aircraft in the history of aircraft development", there actually have been many attempts at providing an efficient VTOL aircraft. Here are 45 different designs, categorised by technical approach (larger version available here). 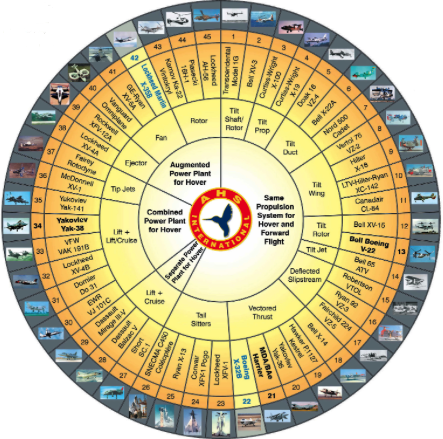 VTOL aircraft are expensive to build, expensive to operate, have a shorter range, carry a smaller payload, and have a substantially higher accident rate than a conventional aircraft of similar size.

A Marine maintenance officer told me that to change the engine on a Harrier, it's 400 hours work, whereas it's about 4 hours on the Hornet. Engine placement on a VTOL aircraft is critical to maintaining CG while in hover, which is why the Harrier's engine is buried in the middle.

The one advantage of VTOL (or typically STOVL, vertical takeoff severely limits the fuel and payload) is the ability to operate from a small and unprepared base. With the advent of aerial refueling, which extends the range of aircraft that need a long runway, the need for VTOL aircraft is now very limited. For short range, quick response combat support, helicopters with their superior slow/no speed flight envelope can fill the need.

The only reason to use VTOL aircraft on a carrier is if the carrier isn't large enough to support a catapult and arresting gear. For a smaller navy, it's cheaper to build a small carrier with a few STOVL aircraft, than build and maintain a large cat/trap carrier. That's the tradeoff - VTOL aircraft are more expensive, but the smaller carrier needed to support them is cheaper to build and operate.

Which makes the RN's choice of the STOVL F35B for the QE class carriers a bit puzzling - they are definitely large enough to support cat/trap, with the lower costs, better mission performance, and lower accident rates of cat/trap aircraft.