Is it possible to maintain horizontal flight with the angle of attack above critical value by increasing speed? 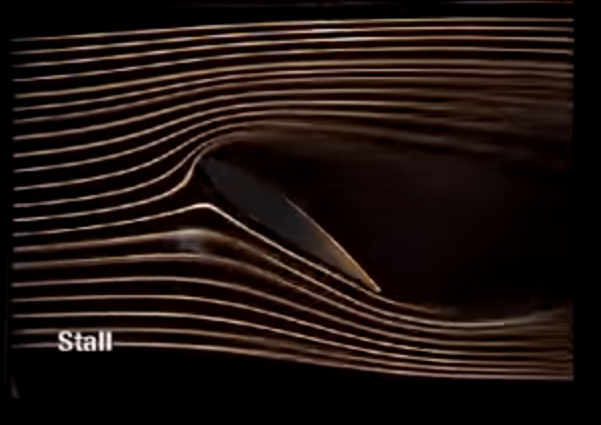 Let's imagine that we have extremely powerful engines and enough tail stabilizer authority to maintain horizontal flight with any speed.

Is it possible to maintain horizontal flight when:

I assume, the lift that we will get in this case, will be generated mostly by Newton's law by deflecting air ONLY by the LOWER side of the wing.

That is kind of what the mechanism of lift of a flat plate does: the sharp leading edge destroys the upper flow pattern almost immediately. This question has more info on it.

The lower side of the wing does provide as much or more lift, even when stalled, at AoA of 45°, so lift would not be the problem. Drag would be:

On this scale, drag for the NACA 0012 profile is very close to zero until the aerofoil stalls, after which it jumps up and continues climbing. At AoA of 45° the C$_D$ is 1.1 instead of about 0.02 when not stalled - you need over 50 times the thrust to maintain the stalled condition you are describing!

17
What is the performance of a flat plate wing?

14
What amount of lift would be created in the fallacious "lift from equal transit time" theory?
5
Which are some planes shaped like an inverted wing?
3
What is the relationship between Angle of Attack and Angle of Incidence?
14
Why does a stall decrease lift, rather than increasing it?
6
Why is the A330/A340's angle-of-attack protection disabled in alternate law, even if the AoA vanes are operating normally?
2
How does the engine produce aerodynamic lift at high angle of attack?
3
How common is it in current British usage for the angle between the chord line of a wing and the flight path to be called the "angle of incidence"?
2
Is the lift vector reversed during inverted flight?
1
Does this web page really correctly depict the angle that is called "incidence" in the French language in the aviation context?
15
Do airliners reduce their angle of attack to maintain lift = weight as fuel burns off during cruise?