Are there any safety mechanisms to prevent emergency slides deploying inside an aircraft?

Does this kind of situation happen, or is this a test situation? Are there mechanisms to prevent inward deployment of emergency slides? 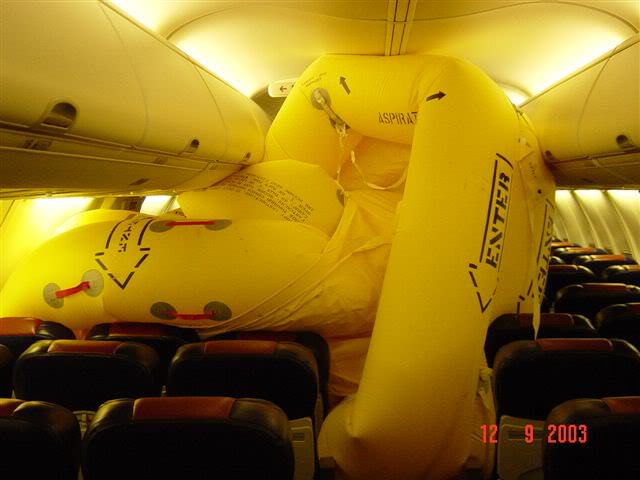 Yes, they can inflate into the cabin. The FAA has been criticized for not taking better action regarding this and several other escape issues. Consider what happened on July 6, 2013 when Flight 214 struck the sea wall while landing...

Here is a direct quote:

During the crash two of the inflatable chutes deployed into the cabin. The first chute, which blocked the forward right exit, nearly suffocated a flight attendant and was deflated by a pilot with a fire axe from the cockpit. The second chute expanded toward the center of the aircraft near the fire. It trapped a second flight attendant until a co-pilot deflated it with a dinner knife.

When I worked for Continental Airlines, a slide would deploy unexpectedly either while the aircraft was stationary at the gate or while the attendants were opening the door (no fault of theirs). I have never heard of a slide deploying while in flight.

Escape slides are absolutely valuable means to provide safe egress way to ground in emergency evacuation. But it is absolutely true that escape slide can be inflated inside aircraft, so that means safety device can be fatal obstacle to saving life. There were many cases that the slides were inadvertently inflated in the cabin in case of emergency landing.

I wonder why NTSB is so passive to recommend to modify the technical requirement of this emergency equipment. I strongly believe that it should not be inflated at any time inside the cabin.

Not the answer you're looking for? Browse other questions tagged safety equipment emergency-slide or ask your own question.

55
What does it mean for a door to be armed?

43
When are aircraft required to dump fuel for emergency landings?
51
Aircraft Emergency Evacuation slide inflation system: Why is a mixture of CO2 & N2 used instead of pure N2?
6
Are there any regulations on fueling aircraft inside hangars?
9
What safety mechanisms prevent thrust reverser deployment in mid-flight?
15
Is it a standard procedure to use emergency slides without imminent danger?
5
Are there any regulations on who can sit next to emergency exits?
4
Are there any safety features to prevent reversible-pitch props from reversing in flight?
4
Why do almost all overwing exit slides open over the trailing edge of the wings, and almost none over the leading edge?
0
Is flap-asymmetry protection on airliners still active even on the ground?