My understanding is that in the highest RPM configuration, the propeller will provide the highest thrust. This implies that the lower RPM will result in lower thrust ( true? ). If the objective is to get to the destination in the shortest possible time ( the most common objective ) why would anyone want to mess with the pitch of the propeller?

I understand that using a lower RPM may have other advantages like lower engine temperature, lower noise and possibly longer engine life. I'm hoping there is an answer like: ( you can reduce the pitch but maintain cruise speed ..) :) OR for a significant reduction in noise level you will sacrifice 5kts in speed.

This answer doesn't answer my question.

why would anyone want to mess with the pitch of the propeller ?

A propeller runs at its highest efficiency when used at a particular combination of forward speed and RPM. By changing pitch, you change this combination, so the best efficiency can be shifted over a range of airspeeds.

For the physical background please consult this answer.

This implies that the lower RPM will result in lower thrust ( true? )

Yes, lower than maximum thrust. If you need less than maximum thrust, a lower RPM is sensible to reduce engine wear. Reduce RPM only if the remaining prop speed can still absorb the power; in other words, make sure the RPM is high enough to allow the engine to run at the speed needed for the desired power. But do not control thrust with RPM - this is what the throttle is for.

A piston engine outputs a constant amount of power, regardless of airspeed. This power output grows about linearly with engine RPM. You control this power with the throttle (and measure the power indirectly with the manifold pressure) and use the prop pitch to allow the engine to run fast enough to create the desired power at all. If you run the prop faster by reducing pitch, it will operate at a blade lift coefficient which is lower than that of optimum blade L/D, so you lose efficiency. Also, the engine will run faster and be in the partial-load operational range where it also runs less efficiently. Run the prop slower by increasing pitch and you will slow down the engine so it cannot produce the desired power. Also, now the propeller will run at a higher lift coefficient, efficiency will drop and part of the prop blade might even stall if you increase pitch too much.

As to what is a significant reduction in noise: This is subjective and I advise you to find out for yourself.

Thrust of the propeller is a function of propeller RPM, and of the blade angle of attack:

You get the lowest specific fuel consumption at the highest L/D of the blade, usually at a blade AoA of about 6°.

What a constant speed propeller really offers is the ability to operate at the maximum theoretical effiency of the propeller for a desired engine speed throughout the airplane’s entire flight envelope. Propeller efficiency is defined as ratio of thrust horsepower available to propel the aircraft forward over the brake horsepower delivered to the propeller by the engine crankshaft.

Gasoline engines produce specific power outputs at specific engine speeds. Maximum power output orrurs at the some particular engine speed, generally redline (maximum engine speed). Since a fixed pitch propeller cannot alter the propeller pitch, it has to be designed for certain flight regimes where it provides the best propeller efficiency. This generally doesn’t not occur on the ground at zero airspeed in order to prevent engine overspeed as the aircraft gains airspeed and allow for a larger operating envelope at full throttle. Airplanes fitted with cruise propellers having higher blade angles of attack and consequently lower max engine RPM during the takeoff roll, making for longer ground rolls and sluggish climbs to trade off for faster cruising speeds. Planes fitted with climb propeller accelerate and climb better at lower airspeeds but can’t cruise as fast without engine overspeed risks.

Since a constant speed propeller can alter the pitch of the blades to adjust engine speed in flight, it can then increase or decrease the workload applied to the engine crankshaft, maintaining a desired engine speed and power output for said speed which is then converted into thrust with minimum drag penalty.

Engine power output settings are then a specific combination of manifold pressure and engine speed. Manufacturers publish these for specific engines and propeller combinations in the form of power charts. These guidelines should be observed to obtain the required power outputs and fuel burn during all regeimes of flight. An example power chart is below from a Piper PA-28RT-201T Turbo Arrow IV. 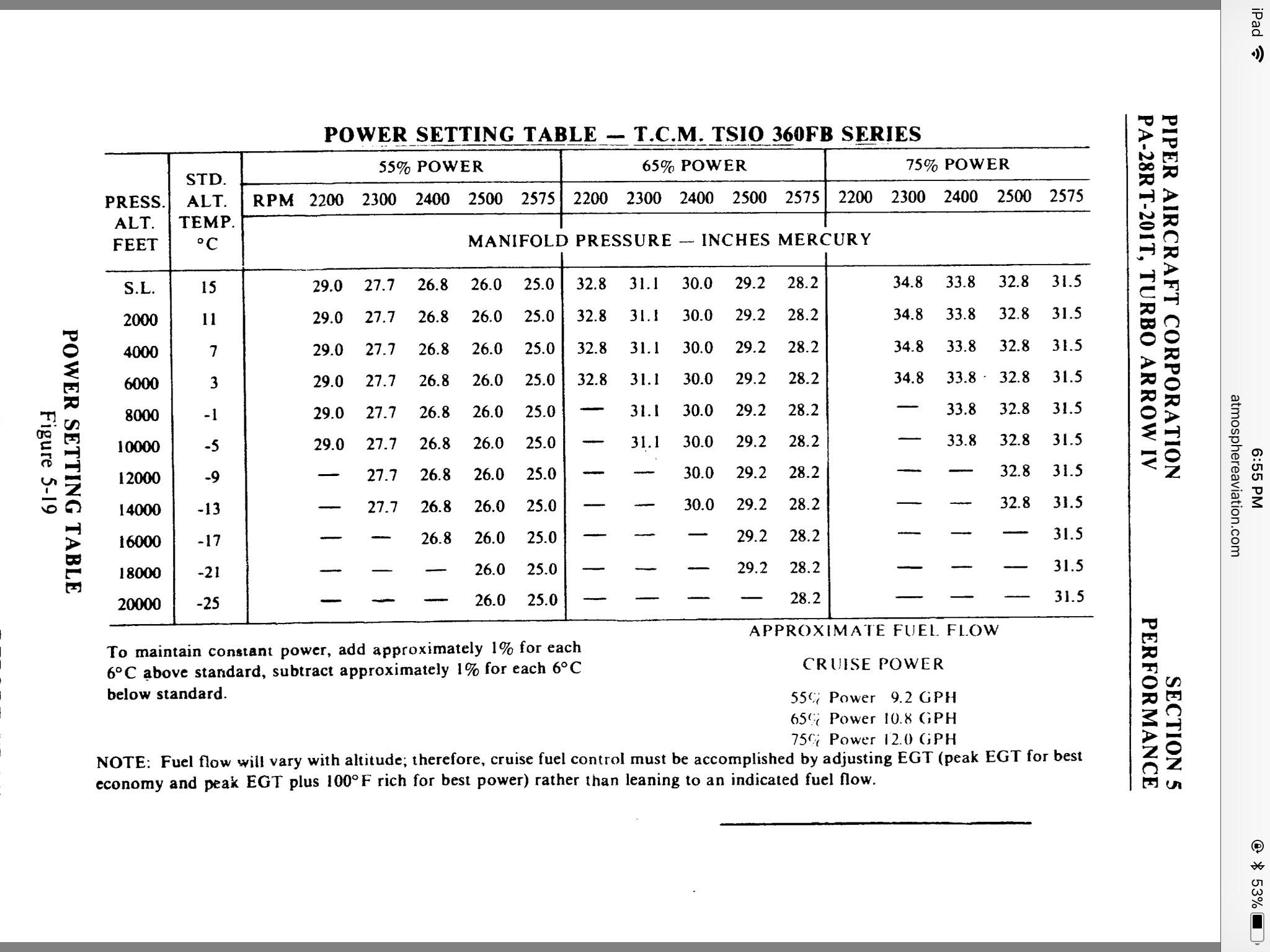 Example: Suppose you wanted to cruise at 65% power at 12,000ft pressure altitude, assuming standard conditions. Using the power chart 28.2” and 2575 RPM will be required for the desired power output at the lowest manifold pressure.

You can think of a constant speed propeller similar to the transmission on a car. Once at cruise altitude, you start dialing in more propeller pitch (seen on RPMs), and lowering the throttle (seen as Manifold pressure) which has similar effect to shifting up gears in a car. If you want to climb more, you have to undo that, similar to downshifting in a car. Manifold pressure drops with altitude, so at some point you can't reduce the throttle anymore as you'll have it full in. Don't forget to lean the mixture, generally above 3,000', so you're not running too rich and just wasting gas. Then enrichen on the way back down.

The advantage is more speed at a lower power setting, and lower fuel consumption.

You can run flat out if you want - the propeller governor should limit the RPMs to 2700, you are running over redline if you go higher, bad for the engine. There is a safety-wired screw adjustment on mine to set the max RPM allowed.

Here is the answer I got from my piper dakota instructor:

When you are taking off and climbing you do this at max power and lowest blade angle. When you reach cruising altitude and start leveling off, the RPM starts increasing and threatens to go beyond the red line (even though the engine is rated at 2400RPM). In this situation to continue to get maximum thrust within the power envelope of the airplane, you can adjust the pitch to lower the RPM.

15
What is the propeller efficiency, $μ_p$, of modern propellers for light sport aircraft?
7
In a constant speed propeller, why does the RPM drop with a prop pitch increase?