How can I triangulate a position using two DMEs?

What is the formula for determining an aircraft's position (latitude, longitude) using barometric altitude and the ranges to two DMEs?

We can find the exact method to use online, after all this is a common 3D trigonometry problem. I'll use Michael Geyer US DoT report: Earth-Referenced Aircraft Navigation and Surveillance Analysis. The principle is:

Intersect two spheres to get a circle 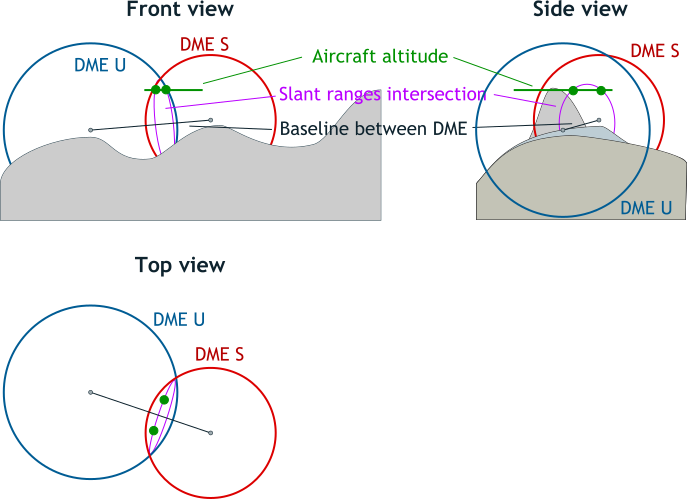 Intersect the circle with a surface to get two points

The aircraft is flying in a quasi horizontal plane. This plane intersects the circle at two locations (green points in the figure above) which are symmetrical to the baseline and where the aircraft must be located. By using the direct information we have (altitude and slant ranges), we can compute the coordinates of the two points.

There are several methods to eliminate the virtual position:

In large aircraft, position is determined using multiple means including inertial and GNSS, so it's not difficult to know where the aircraft is approximately.

Determination of the points coordinates

The DME/DME/Elevation case boils down to: 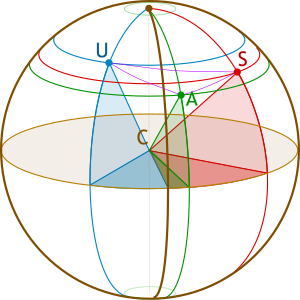 By convention we need to name $\small U$ the station which is westward. This allows us to refer at the aircraft position like "the one south of the baseline".

Step 1: Solve the spherical triangle for each station

The first actual step is to get the angle $\small \theta_{US}$ formed by the two DME stations and earth center:

We will need to know one of the azimuth at the extremities of the baseline between $\small U$ and $\small S$:

Step 2: Confirm inputs are consistent and a solution exists

Now we know the three sides of the triangle $\small \widehat{USA}$, we can determine any of its angles. We need only the angle with its apex at one station:

It's time to decide which of the two aircraft positions we want by selecting the corresponding azimuth angle at station $\small U$ (it could be at $\small S$, but we did the previous step for $\small U$):

I posted a Python implementation on Stack Overflow.

Not the answer you're looking for? Browse other questions tagged navigation radio-navigation dme or ask your own question.

3
What is wrong about this interpretation of QFE and QNH?

13
What concerns do the FAA and EASA have in 2014 with "own-ship position display" on EFBs?
1
How can I calculate a flightpath given a set of waypoints?
8
How are you supposed to get the East/West variation on this question in the FAA PPL written exam?
6
How can I estimate Roll from Position?
12
What's the difference between orientation and position?
2
Compute great-circle track from longitude
9
Are there two navaids on the same frequency close enough to be confused?
5
What does a DME indicator do in HOLD or RNAV mode?
3
How do you calculate the deviation from an RNAV waypoint radial?