Why did America not build its own ekranoplan?

The Lun-class ekranoplan (NATO name: "Duck") is a ground effect vehicle designed by Rostislav Evgenievich Alexeyev and used by the Soviet and Russian navies from 1987 until sometime in the late of 1990s. This project was huge, scattered a lot of effort, over-cost and under-delivered. 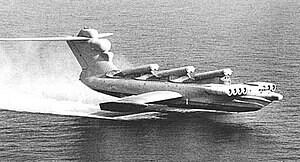 Why did the USA not design its own ekranoplan?

Best answer: the United States had no need for one. These kinds of large wing-in-ground-effect craft, while impressive, really serve no military purpose and provide no major military advantage for the US Armed Forces to possess.

Aside from the internal Great Lakes, there are no major bodies of water within the United States of America where such a craft could be readily employed and no need to position strategic or tactical assets there. Both the Atlantic and Pacific oceans are covered by the US Navy with the form of carrier battle groups and submarine fleets, which provide portable power projection for undersea, surface and air operations virtually anywhere around the globe.

Large wing-in-ground-effect aircraft do not provide a significant increase in America’s power projection when compared with that.

One reason the US never pursued this design is that it can't operate effectively in rough seas. It needs a relatively calm surface, which limits where and when it can be employed. A potential opponent can plan for this shortcoming.

In the early 1980's, there was a US Navy plan to conduct flight tests using the Hughes Hercules aircraft, to study ground effects. It wasn't expressly designed as an ekranoplan, but its enormous wings benefitted from ground effects (the goose never made it out of ground effects on its one flight). Sadly, that plan never came to be, and we missed the opportunity to see that giant back in the air.

Not the answer you're looking for? Browse other questions tagged ground-effect amphibian or ask your own question.