Are there any models for planning aircraft placement in hangars?

I work alone at night doing line operations (fueling, tugging/towing, etc.) and emergency services (police, fire and EMS) at my airport. When a pilot/customer comes in and wants to know if we have hangar space available for their aircraft, it would be nice when planning aircraft placement in those hangars to have figures to scale of various aircraft. That way you can see whether or not a specific aircraft can indeed fit, and in what configuration, before trying as I rarely (if ever) have a "spotter" or a wing-walker.

Or perhaps even software or a computer program. Put in the hangar dimensions and which aircraft are to be placed.

I’ve not heard of software programs to do this, but the Navy has made use of a relatively low tech solution to address this problem for decades aboard their aircraft carriers. 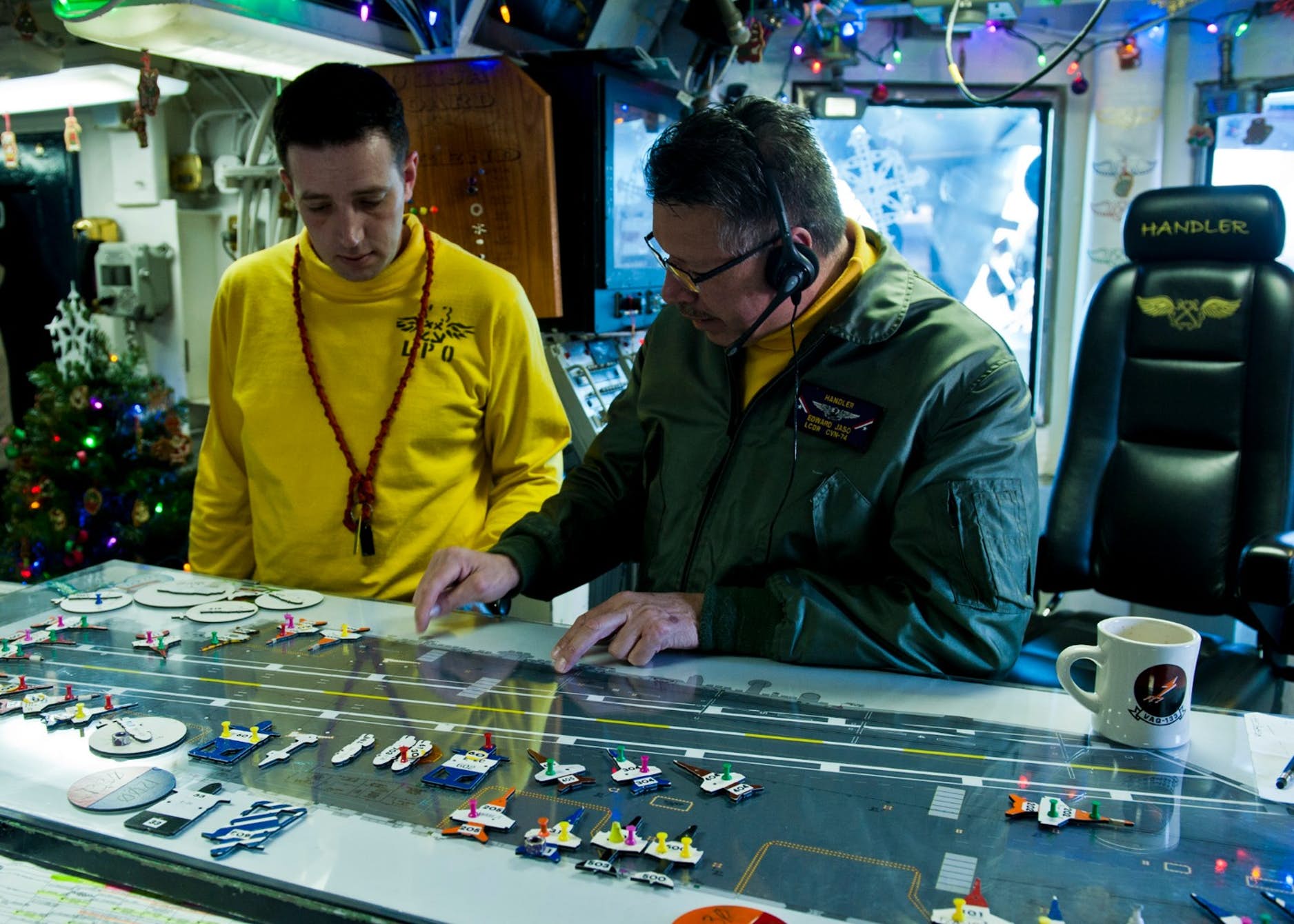 Known simply as the Ouija Board, the aircraft handler and his crew utilize a scaled physical map of both the carrier flight deck and hangar deck along with appropriately scaled footprint models of aircraft in order to track and plan aircraft movements.

I’d guess a similar scheme could be employed to solve your problems.

There’s at least one software solution that can be used to address this for a wide range of aircraft types. In my old company, we have used a software called PathPlanner and looked at another one called Aeroturn to simulate aircraft ground manoeuvring. The same or similar software products are also used for airport design. They would, as far as I can see, very well allow to simulate hangar occupancy as well.

We solved a similar problem of optimization for a customer once which is an analog of this. The exact algorithm used was simulated annealing. If the same problem were presented today, there would be many competing alternative algorithms, generally in the class of genetic algorithms.

The problem of optimization presents itself in many aviation related activities, from packing aircraft, to routing aircraft, and in a recent instance, to optimizing dynamically flights in a battlefield, to factor in new situations, and adjust the costs and risks depending upon the rules established by command.

The interested person might start with an analog of the problem, which is the traveling salesman problem. One might also consider watching: "The Secret Rules of Modern Living: Algorithms," a one hour movie on similar topics, where air traffic sequencing is discussed.

In short, the problem is trivial with a handful of planes to fit in a hangar, and grows rapidly as the numbers increase. So much so that it rapidly becomes seemingly unsolvable. Optimization algorithms generally do not find perfect solutions, but find approximations, which are practically close enough.

There is a program called Stax that runs on Mac, Windows, and iPad that probably does what you're looking for.

Not the answer you're looking for? Browse other questions tagged airport ground-operations hangar or ask your own question.

14
Which Aircraft Models need a Tripod Jack for tail support at airport?
3
Are these hangars?
10
Are aircraft still guided by ground marshals?
8
How do airports manage gate assignments for aircraft?
2
Are there any airports whose budgets are in the public domain?
50
Is there any combination of two airports that are connected via taxiways?
2
Are there specific names for airport vehicles used for de-icing?
20
Are there any privately owned large commercial airports?
26
Are there any drawbacks to requesting progressive taxi every time?