How can a headset cause continuous transmission (PTT blocked)?

I own three aviation headsets: - BOSE A20 - David Clark H10-13.4 - Compilot Lite (a cheap headset bought recently, for occasional use by passengers)

I tested the Compilot Lite last week (co-pilot side), but I ended up blocking the frequency at a local airport. Unfortunately, it took me some time, and somebody waving furiously at me, before I found out.

I was wondering how this issue could occur and what could be wrong with the headset. I found an explanation on this forum, which states that the tip of the connector functions as a PTT button when grounded. However, the connector does not seem to differ a lot from the other headsets. Left = Compilot, middle = DC, right = Bose. 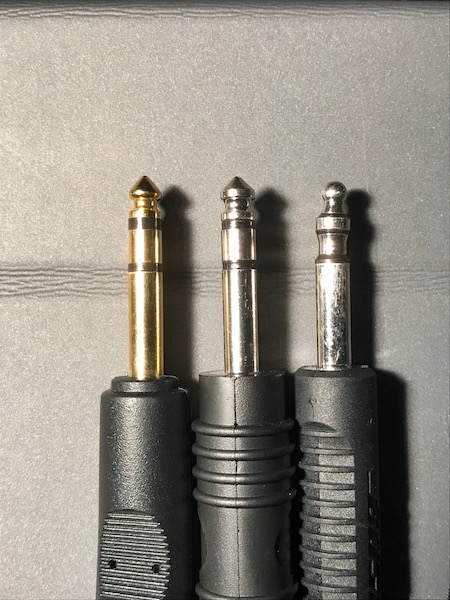 Could it be caused by something else? The type of microphone?

Any tips or suggestions are welcome.

PS the aircraft was a C172N, a rental which I often use, but never had this issue before with the other headsets

Apparently the tip connection is being grounded activating the PTT. From the photo the only thing that could possibly be a problem is the Compilot plug being a tiny bit longer than the DC. But the detent in the tip is what should decide where the plug sits in the jack and that looks fine. It almost has to be a wiring problem in the Compilot. If you have a multimeter check for continuity between the barrel and the tip. There should be no continuity unless a PTT button is being pressed.

The issue has been found ... the headset cable was damaged. One of the audio cables was slightly exposed, causing it to touch the ground (which is the shield of the cable and is not covered). This only causes a continuity when connected to a radio, so it was hard to find ...

Not the answer you're looking for? Browse other questions tagged headset or ask your own question.

12
How are the "medical communication" headset sockets on some airliners used?
4
Can a GA headset be used for listening to normal audio or with a cell phone?
4
Instructor can't talk when H10-13.4 is plugged in