What is an acceptable phugoid oscillation duration?

What is an acceptable settling time for the phugoid mode in a large aircraft?

As a more specific question, what is the settling time when the aircraft (say, a B747 or an A320) switches from Climb to Cruise phase at the top-of-climb?

Here is the response of a 180 passenger high-subsonic twin-jet simulator: the first period takes about 87 seconds.

From the trimmed position, excite the phugoid mode by applying longitudinal control in one direction in order to change airspeed by approximately 10 kts, then release.

To answer the additional question of when the resulting motion amplitude would be below 0.1 deg, I made a kind of a digital simulation according to this block diagram:

and then tuned spring stiffness C, inverse inertia 1/M, and damping constant K until the resulting response overlaid the original aircraft one. The resulting motion gets to a max. amplitude of 0.1 deg in about 1,600 sec - 27 minutes. 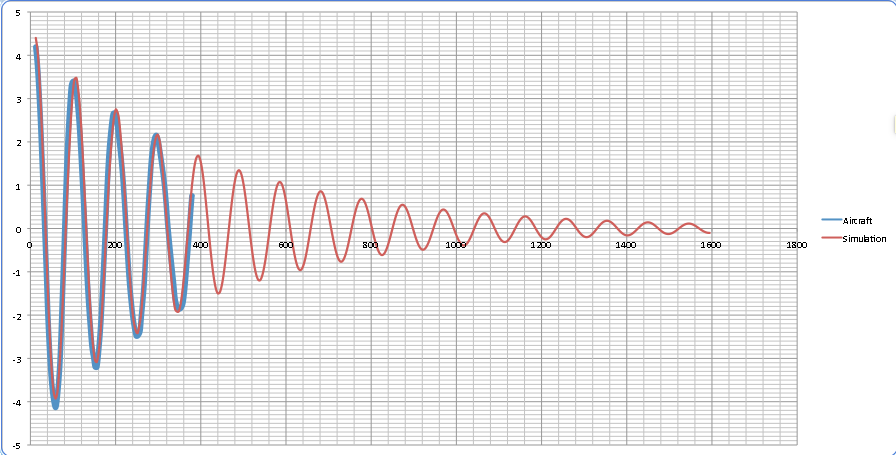 Normally this is in the tens of seconds.

What is an acceptable settling time for the phugoid mode in a large aircraft?

Phugoid is a hands-off (i.e. pilot and autopilot off) rigid-body mode, with or without Stability Augmentation System. MIL-STD-1797B specifies a damping ratio of at least 0.04 for Level 1 handling quality. The typical phugoid period is around 90 seconds. This converts to a settling time (within 2% of trim speed) of around 24 minutes. This is so long which makes settling time itself not a particularly good measure for phugoid.

What is the settling time when the aircraft (say, a B747 or an A320) switches from Climb to Cruise phase at the top-of-climb?

Leveling off from climb is not hands-off. A well-tuned autopilot should be deadbeat with minimal overshoot and oscillation. The time scale is also vastly different; we are talking about settling time on the order of a seconds (not half an hour). And this not phugoid.

Not the answer you're looking for? Browse other questions tagged aircraft-physics stability or ask your own question.

36
Why do aircraft need a vertical tailfin, but birds don't? (and lots of fish do?)
7
What is the maximum weight on the main gear of a large aircraft at rotation and touchdown?
6
What is the physics of crosswind landings for large airplanes?
2
What is the location of AC for typical modern airplanes?
8
What is the "compression ratio" of air hitting the nose?
0
What kind of motion will an airplane enter into when disturbed?
1
How can I reduce the Short Period frequency of a Pitch Hold Auto-Pilot while maintaining stability?
1
What is the purpose of downthrust?
4
How does an aircraft designer increase dynamic stability?
4
What happens when the eigenvalues of the longitudinal A matrix in dynamic stability analysis, are NOT two sets of complex conjugate pairs?