Could a quadrotor use a main gas powered rotor with small electric rotors for attitude control?

Here is my idea of heavy lifting quadcopter. (Although it is not a quad copter anymore because of the center rotor)

Have a big coaxial fixed pitch rotor at the center. The rotor is gasoline fueled. Have the other rotors at extended length with electric motors to control pitch yaw and roll. The center coaxial rotor will do the heavy lifting.

Can it work? What are the difficulties?

Early versions of Sikorsky's VS-300 helicopter prototype used something similar to what you're describing, as his first attempts had three rotors on the tail boom, one vertical rotor for anti-torque and yaw, and two horizontal rotors for pitch and roll. 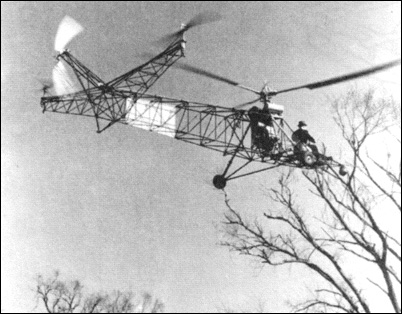 Of course, if you're already using large main rotors, you might find, as Sikorsky found, that cyclic pitch control works even better and eliminates the need for the two horizontal rotors.

Your idea works and has a lighter main coaxial rotor : it has no swashplates, and a fixed pitch.

On the other hand you have four beams supporting four electric engines for attitude control.

If those beams, electric fans, generator (electrical output from gasoline engine), can match the weight & efficiency of two swashplates, then it is a good idea.

Yes that can work - with some difficulties and limitations. Autogiro's don't have variable blade pitch and they can fly, but they also don't have the reaction yaw issue due to driving the main rotor.

To me it sounds like this design is halfway a quadcopter and an autogiro, combining mostly the drawbacks of each design. The quadcopter has simplicity of control as its main redeeming feature, this vanishes when you add a big, engine driven rotor. As to the drawbacks of the autogiro....ehm. I cannot think of one. 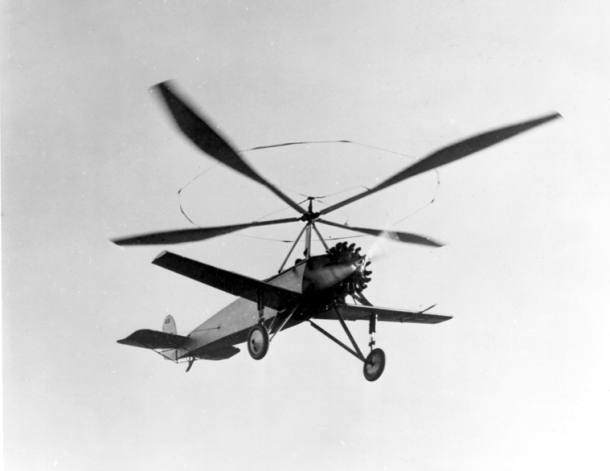 The autogiro's development history is a point in case: De la Cierva's first designs used a conventional elevator and ailerons on stub wings for pitch and roll control, these were not very effective at low speeds so he made the rotor being able to tilt on a gimbal with respect to the shaft. Later as the rotors got bigger, the forces to tilt them became too high and the mechanism for cyclic blade pitch was developed. All of this in the 1920s/1930s!

So while your design seems possible, I cannot see an advantage over an autogiro with a tilt-able rotor. One big horizontal rotor for lift, one small vertical rotor for thrust.

Not the answer you're looking for? Browse other questions tagged helicopter quadcopter or ask your own question.

6
Why are aerial taxis multirotored, instead of a single rotor?

21
Why does a helicopter need cyclic control rather than just tilting the whole main rotor?
6
For military helicopters, what is the typical fatigue life of the main rotor dynamic components?
17
In helicopters, why not have electric motors controlling blade pitch?
8
Is it possible to design a helicopter with fixed rotor blades only (no blade angle/flap/pitch)?
2
How to calculate optimal prop diameter, pitch, torque and power coefficient given required thrust?
1
Will Thrust on Rotor (Main) increase with altitude?
17
How does this RC helicopter keep itself upright?
0
Normal tendency of helicopter with counter clockwise rotating main rotors (top view) with force trim off and leaving controls?