What's the difference between orientation and position?

In INS (Inertial navigation system) sensors, is there a distinction between the following?

Is the orientation relative to a specific axis while the position is absolute? If yes, what is the axis?

Yes there is a distinction, pitch, roll and heading are angles [unit = radian] and latitude, longitude and altitude are linear distances [unit = meter]. Together, these six parameters define the six Degrees of Freedom that define the momentary state of a rigid object with reference to the earth.

All six are defined relative to earth axes. For the linear dimensions this is clear, we just need to define a suitable zero point. For the angles:

Conversion of aircraft axes into earth axes is a non-trivial matter and the cause of much confusion, for instance in questions comparing lift to weight: lift is always coupled to aircraft axes, weight to earth axes. The axes sets are defined as follows:

Yes navigation lat/lon is given in [degrees] - the INS sensor ultimately converts displacement into proper navigational definitions of course. But for measuring 3-D aircraft inertial effects the SI system is used, and displacement is internally treated as a linear motion, units [metres].

Position is where you are; orientation is which way you're pointing (including any roll).

"position" is absolute. You can think of it as the x, y, z coordinates of the aircraft in the 3D space.

"orientation" is the state of the aircraft relative to its own axes: 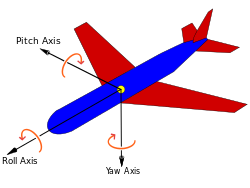 Not the answer you're looking for? Browse other questions tagged navigation avionics flight-instruments inertial-nav-system or ask your own question.

14
What is the exact meaning of "attitude", does it include translational movement?
6
Do aerodynamic forces and moments change aircraft pitch and yaw in the same way?

1
How can I calculate a flightpath given a set of waypoints?
11
How can aircraft determine true north for inertial navigation systems?
8
How can I triangulate a position using two DMEs?
10
What makes inertial guidance unsuitable for auto-land?
4
How is the drift corrected in INS-driven attitude/heading indicators?
9
What clues would have indicated KAL 902 was off course?
6
Can you guide me about the purpose of fine alignment in inertial navigation systems?
7
Could airliners fetch data like AoA and speed from an INS?
9
Why would an artificial horizon's roll axis be different on ground and in flight?