"A field relay in the GCU (generator control unit) allows or prevents field excitation within the generator. When open, the field relay deprives the associated power relay of its ground, which causes the power relay to open."

To my knowledge the M2 uses a Williams FJ-44 engine which has a starter generator on it. My recollection is that it is a 200A 28VDC starter-generator (SG) which is directly connected to the accessory drive (along with the oil pump). If 24-28VDC is applied to it, it will start turning the turbine, for starting the engine. At a certain point, once the engine starts, it is switched so that no power goes into it, and instead power is derived from it to charge the battery and provide gen power to the bus. 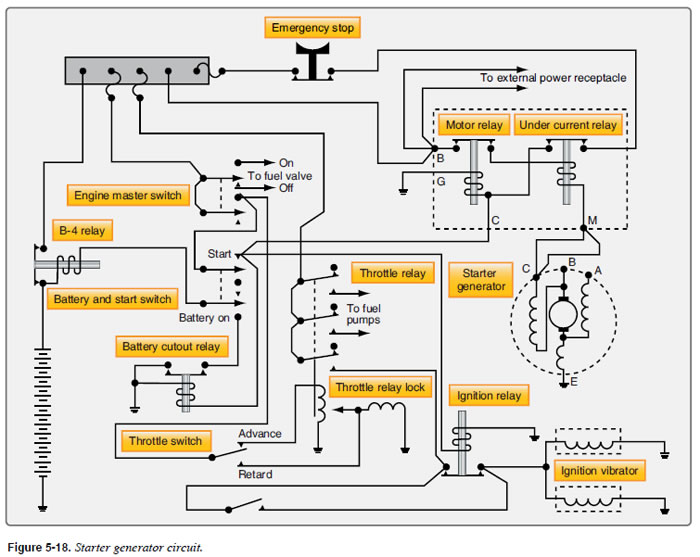 A typical engine starter configuration is shown above, and is common in smaller turbine engines. Note that the starter generator functions as an electric motor, and also as a power source. (Ignore the circuitry for ignition, throttle relays, etc.)

The SG is NOT an AC generator as is common on transport sized aircraft. It is also NOT an alternator, as is common to piston engine aircraft.

You may find the descriptions in this manual http://content.aviation-safety-bureau.com/allmembers/faa-h-8083-32-amt-powerplant/sections/chapter-5.php#4. helpful in general understanding of SG operation. Some of the terms vary from SG vendor to SG vendor, but in general, they are DC motors, and when electric power is removed from them, and they are spinning, they will produce power. Some are self excited with residual magnetism and others utilize an internal circuit to take the small power created by residual magnetism to create a stronger field to create a larger output power from the generator.

Having said all of this, normally a field excitation coil, is the name attributed to an alternator field, which is a magnetic field created by current (not residual magnetism, and not a permanent magnet). An alternator creates AC internally (not DC like a SG) and is then rectified by diodes which are almost always integral to the alternator. The alternator is usually a three phase device and will have 3 or 6 diodes for rectification. Alternators tend to be less than 150 amps, where SGs are typically 200 to 300 amp devices.

If the SG model is provided, perhaps a refined response is possible.