Does a trent 900 engine have the ability to spin extra or more fans?

Given that the most modern geared turbo fans gear down spinning the fan, which essentially translates to requiring less torque or horse power to spin the fans. If the gearing down is in the magnitute of (10:1)(correct me if I'm wrong) and comparable engines were able to spin the fans at a higher speeds without gears, how many more fans can the engine spin if there was a modifaction of an additional propshaft to spin the other fans, because there is a gearbox. How much of an impact on fuel consumption would the be for an extra 1,2,3, and 4 fans if at all it was possible?

A gearbox which reduces rpm, increases torque, but with a slight loss of power due to invetitable inefficiencies.

Your question is quiet confusingly written, but it appears to imply the Trent 900 is a geared turbofan, which it isn't. The Trent is a 3 spool engine, and is the first of the Trent family with a counter rotating HP spool.

The only large geared turbofan in current use is P&W's PW1000G family. (See comment below regard two smaller geared turbine engines). This uses a star design gearbox to transmit 30,000 hp at a 3:1 ratio. The PW1100G, the largest engine in the family, is a 12.5:1 bypass ratio, and a max thrust of 35,000 lb. In comparison, Rolls Royce is developing their "UltraFan", and is expected to use a planetary design gearbox to transmit 70,000 hp at about a 4:1 ratio. They hope to eventually get to bypass ratio of 15:1, and an overall pressure ratio of 70:1. The thrust for the UltraFan is said to be in the range from 25,000 to 110,000 lbs, so it looks like being a signifficantly bigger engine the P&W's geared turbofan. 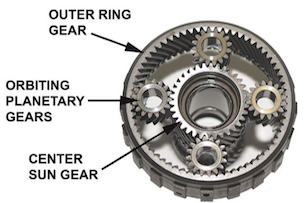 Power loss in the gearbox is mostly due to friction, which generates heat. In miniature gearboxes, heat is not much of a problem because the power losses and the absolute amounts of power involved are relatively small. However, it's much more of an issue in large gearboxes which usually require oil coolers to remove the heat caused by the inefficiencies.

Thus, gearbox efficiency depends on friction. This in turn depends on the quality of the gearing, the number of tooth engagements (how many times one wheel drives another) and the load torque (how much "moment" the gearbox has to deliver).

This article says that a spur gear, the type used in geared turbofans, have an mechanical transmission efficiency of about 98 to 99%. If you look at the picture above, you will notice 8 points where the gears mesh, and efficiency will be lost at ech contact point, so needs to be kept to a minimum.

For a comprehensive overview of geared turbofans, see this "flying engineer" article.

Are you asking for there to be more compressor stages? I do not know of any additional intake fans that you could add. There might be a modification to add compressor stages though. This website might help.

A gearbox that reduces rotational speed indeed provides more torque at the output end: half the rpm, twice the torque. This increase in torque can be used for driving a larger fan disk, then possible because the lower rpm means tip speed can stay below critical Mach; or it can be used to drive an extra disk behind the first disk, counter-rotated to compensate for torque and to reduce exit swirl.

Given a choice between driving a larger disk and driving two counter-rotating fans, the preference will always be the larger fan. If tip speed approaches compressibility, simply gear down more. The twin disk scenario will only be explored if practical limitations to increasing fan size are encountered, for instance if the engine simply becomes so big that the landing gear becomes impossibly long.

5
What are the visual differences between Trent 892 and 900 engines?
1
Can a turbofan maintain torque when spinning fast?
1
What is the diameter of a Trent 900 engine?
1
Could adding a gearbox to the Trent 900 improve the efficiency of the A380?
3
Is it possible to add "planets" to the gearbox of a Trent 1000?
4
Why does the Trent XWB have intermediate compressor stages?