I understand that moving the engines towards the wingtips would increase flutter tendency, but are there any other positioning options which could affect flutter?

How about moving the engine position forward, or backward on the wing. What about the twist of the wings, & the set angle of attack on the ground. Do these have to be considered when positioning an engine on the wings of the airplane?

Also, what about rear mounted engines. What should be considered here to reduce flutter tendencies of the stabilizers?

To better understand what flutter is, see the structure as a mass-spring system like a spring pendulum that has a damper attached to it. The aerodynamic forces both make the spring stiffer and dampen the movement. Crucially, they will act with a delay to the motion of the spring pendulum. Since we are dealing with oscillatory phenomena here, this delay causes a phase shift. The amount of damping increases with dynamic pressure and the phase shift angle decreases with flight speed.

Things start to get interesting when the phase shift angle approaches π. Now the damper will not work against the movement of the spring pendulum but will support it. Instead of reducing the amplitude of the movement, it will increase it - damping will become negative*. Flutter happens.

There are several ways to shift that point outside of the flight envelope:

* to be precise: As long as damping retards the motion, the damping term is mathematically negative and turns positive when it starts to support it.

This is a very interesting question, with a very complicated answer! The problem of Aero-Elasticity is not easy or simple to solve. The reason is, that the equations (or better the system of equations) which describe it are not simple (in this case the non-linearity of the aerodynamic forces create most of the analytical problems). Flutter can be assessed with an aero-elastic simulation. The following graphic (from EPFL) illustrates the system of equations. 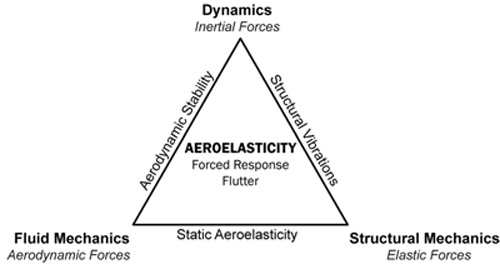 As you can see there are roughly speaking three things (and their interaction) a designer needs to keep in mind: Dynamics, Fluid-Mechanics, and Structural Mechanics. Usually this is done using simplified versions of the airplane like the following (taken from DLR). 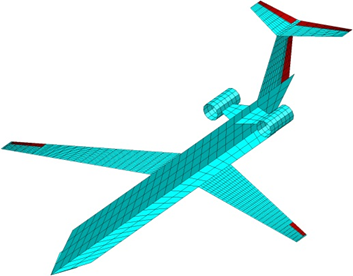 Based on this simplified representations of the air-plane trade-studies can be done to collect a better understanding.

The TL;DR answer to your question is: Yes, all the things you mentioned need to be taken into account to design an air-frame.

When designing an airplane the position of the engine does matter. But it is not only the position but also the mass and the elastic properties of the air-frame. On top of this the aerodynamic forces need to be taken into account as well.

There are no simple recipes to reduce flutter because most of them only work for a limited set of boundary conditions. A very (vague) basic one could be: Place engines so that manoeuvre loads will result in a small (as small as possible) elastic deformation (thereby reducing the amount of potential energy which is stored in the airframe).

The other recipe is to look what others have done. Given you are planing to use the aeroplane in a similar way other manufacturers offer aeroplanes and given you are using similar materials and manufacturing techniques: you could use existing designs as starting points for your trade-study.

No, moving the engines towards the wingtips would not increase flutter tendency. Flutter can be pictured as the tendency of the airfoil to twist itself perpendicular to the airflow. The wing structure is elastic, and the elastic torsion box springs the wing back again - flutter is just like any underdamped spring-mass-damper system that can start to oscillate.

In general, the measures that can be taken against flutter are:

Increasing the mass of the mass-spring-damper system increases overshoot amplitude, increases the time period of the oscillation, and increases the number of overshoots.

So the practical measures that can be taken against flutter are:

The design twist of the wing is computed at cruise conditions, set angle of attack on the ground is not really critical if the plane can rotate back far enough.

Mounting the engine at the back of the fuselage in pods is basically not done anymore for larger aircraft, that question has been answered a couple of times on this site.

Not the answer you're looking for? Browse other questions tagged aircraft-design jet-engine flutter aeroelasticity or ask your own question.

26
Why are "counterweights" used in aircraft production?
10
How are aircraft wings protected against flutter - aerodynamic oscillations that can break bridges?
14
How was flutter mitigated in jets such as the F-15 and F-16?
9
How do you choose engine placement for under wings engines?
6
What are the advantages/disadvantages of in-fuselage engines (eg most fighter jets) vs wing/fuselage mounted engines?
2
What are the disadvantages of a tailless ultralight design?
2
Combating flutter with mass distribution?

57
Why does the DC-9 have engines that are angled slightly upwards?
6
Why can not two modes coincide perfectly for some cases in Flutter phenomena?
28
Why do we use pylons to mount the engines on jetliners?
16
Have we seen the last significant experiments in the configuration of jet airliners?
8
Will manually removing nicks from compressor blades significantly affect the operation of the compressor?
7
Why aren't there any single turbofan airliner?
10
How are aircraft wings protected against flutter - aerodynamic oscillations that can break bridges?
0
How do we choose a frequency range of interest for flutter prediction?
4
Eviation Alice Powerplant Placement