Can a seaplane make a long distance sea voyage on the sea?

In general, if a seaplane can fly X distance, can it travel that distance on the surface of the water as if it was a boat or ship? In other words, this would be equivalent to taxiing all the way to a destination. E.g. if a seaplane has the range to fly from New York to Amsterdam, could a pilot simply choose to taxi all the way across the Atlantic Ocean and casually slip into the harbor?

If this is not generally possible, what rules define what sort of sea journeys a seaplane could undertake? Is there a coefficient of inefficiency (e.g. if a seaplane can fly X miles, it can taxi X/2 miles due to increased drag from the water)? Are the vast majority of seaplanes not set up to handle the stresses of a long-distance sea trip, making them likely to result in a shipwreck (er, seaplanewreck)?

This question is about the physics and engineering issues - not about licensing. I am fully aware that taxiing a seaplane across a body of water might make the trip fall under boat regulations and require a sea captain's license, but I'm not asking about that.

Not very well. If we look back to the 1930's, the age of the large flying boat airliners, they were designed to take off and land in minimal sea states - no more than 3 foot swells. Typical usage would be in large rivers or protected bays, and the flying boat was used because long runways weren't available. Nor did those airliners tend to stay on the water for long, usually they were brought onto land with beaching gear if they weren't in service.

The problem is - an aircraft on water is highly susceptible to changes in wind - it is, after all designed specifically to use flowing wind to remain airborne, so gusts of wind while on the water will have a stronger effect on an aircraft than they would on a ship. As well, the aircraft's hull in the water tends to anchor it, subjecting the airframe to stresses from wind in varying directions, that it wouldn't encounter while flying.

Amphibious aircraft and the pure flying boats, left on the open ocean, tend to become damaged to the point of becoming non-airworthy.

While on lifeguard duty off of Truk during WW2 and landing to pick up a shot down pilot, Lt John Dowdle's OSU-2 Kingfisher had overturned due to a gust of wind. Lt John Burns also lost his Kingfisher due to the hull springing leaks from being pounded by waves, while he rescued Dowdle and the downed pilots. Both Kingfishers were lost, but their crews plus the airmen they had rescued were saved by submarine USS Tang, in an epic lifeguard mission that saw Tang pick up 22 aircrew.

The Bermuda Sky Queen, a Boeing 314 formerly known as the Pan American Capetown Clipper, ran short of fuel while flying from Foynes, Ireland to the US. It did survive for over 24 hours on the ocean before the 62 passengers and crew could be rescued, but after that much time on the open ocean, the plane was coming apart from the pounding of the waves (the tail section was starting to come loose) plus damage from colliding with the Coast Guard cutter picking up the people. As a result, the Bermuda Sky Queen, the last airworthy 314, had to be scuttled.

In the water: it could reach its fiinal destination, if:

The main drag resistance on a boat is the surface wave (wake) drag, much higher than the submerged incompressible drag deeper down. Wake drag increases dramatically at a certain speed-to-length ratio, like hitting a brick speed wall. That is why hydrofoils work: they lift the vessel out of the water and eliminate wake drag.

The other bit about range efficiency is in the propulsion. Highest efficieny is obtained by accelerating a high mass stream to a lower velocity, and water has a density that is 1000 times that of air. Let that ships' propeller lazily turn about to propel the long supertanker to a slow speed, and there is not much that can beat that efficiency. Perhaps a road train running at 5 km/h. The flying boat propelling air cannot do it.

Speed is the governing factor in travel efficiency. Aircraft only exist because people want to be somewhere now.

Are the vast majority of seaplanes not set up to handle the stresses of a long-distance sea trip..?

Flying boats need to fly and are not designed for handling violent seas. They sit relatively high in the water and would topple over if they had no outrigger floats - picture that set-up in a storm and it is easy to see a wing break off or the craft capsizing.

From here looks like an airboat (propeller driven boat) is not very efficient mean of transportation, using somewhat 0,1 l of fuel per minute (so 6 l per hour) when moving at roughly 2 knots (so 3,7 km/h), so only 0.6 km per liter. Assuming we have somewhat 160 l fuel tank, this is enough for about 100 km journey.

If it the "airboat" is actually a seaplane, probably would rather fly. It may be even less efficient as has not been designed for taxiing on water over hundreds of km.

Is it possible using the engines/propellers, at taxi speed, if you have a mean to refuel.

As the fuel consumption will be about the same per unit of time, the cruise speed vs taxi speed ratio is meaningfuel, you will need to refuel 15 or 20 times.

You don't use anymore lift, and the craft is not anymore an aircraft. This possibility would be silly. The solution is to increase speed by lifting the hull with hydrofoils. 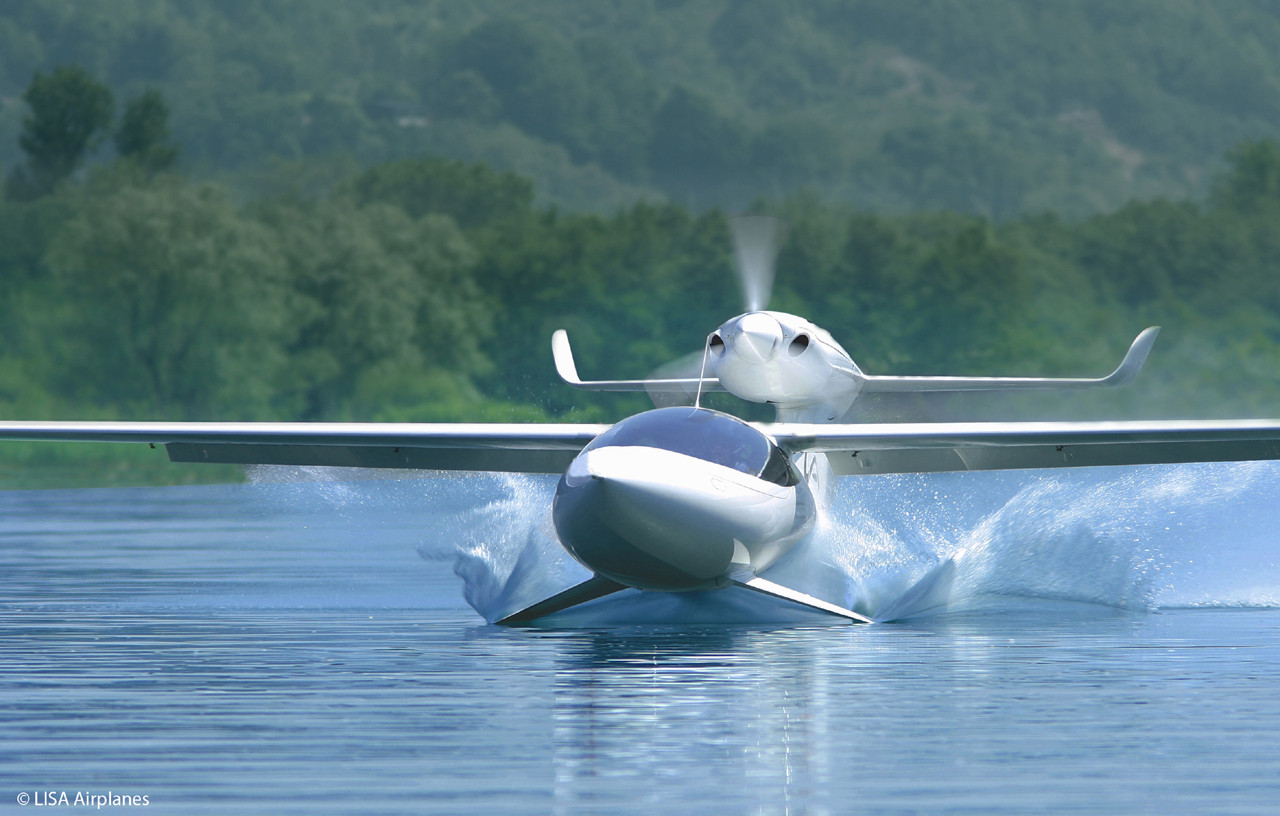 Lisa taking off with hydrofoils, source

The actual lifting surfaces are now the hydrofoils (air/hydro foils), they create lift from the water flow. Since the craft is only used over water, it can be optimized, and the wings can be shortened. 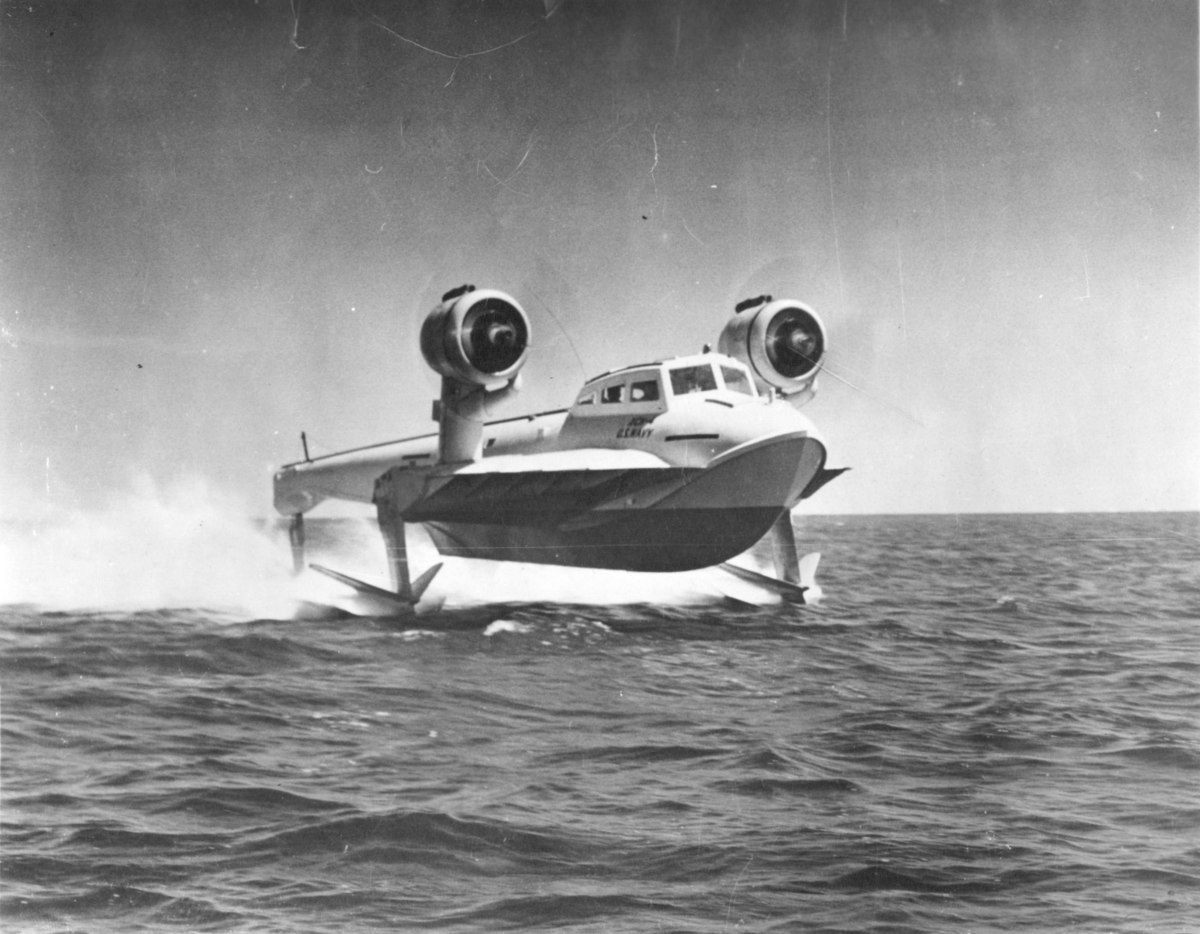 As a hydrofoil craft gains speed, the hydrofoils lift the boat's hull out of the water, decreasing drag and allowing greater speeds.

9
What is the make and the model of this seaplane?
9
How far can a passenger plane taxi?
9
Can I legally taxi a seaplane in a canal or channel?
1
Can you land IFR at sea?
21
Are seaplanes allowed to taxi in residential areas?
26
How to slow down a seaplane on water?
2
Why choose a seaplane for crew rotation at sea, supply of spares to ships, long-range search and rescue and surveillance?
6
How should you coordinate with traffic at non-towered airports?