Does a military equivalent to civil ATC exist?

There are specific military ATC facilities, e.g. at military airfields, or temporary airstrips:

But is there usually an overall specific military ATC system for training and/or war operations so that:

The scope for answers could be NATO or other large military organization worldwide.

Yes, for their airspace.

Generally speaking, US Military has its own ATC for domestic military installations and other venues such as US Navy aircraft carriers. Most of these military-staffed airports are rarely transited by civilian aircraft, and are instead designed to let the military run their own show with their own aircraft.

At some airports around the country which provide provide joint military-civilian use, such as Charleston Air Force Base in South Carolina, Scott Air Force Base in Illinois, and Marine Corps Air Station Yuma in Arizona. These airports have significant military traffic and also allow civilian aviation operations. At such airports, typically FAA controllers are in place and military aircraft work with them.

Most of the airspace in the US is owned by Air Route Traffic Control Centers, which are staffed exclusively by FAA-employed civilian controllers. These controllers handle all air traffic between airports, including military aircraft transiting the national airspace system, which means that civilian and military facilities all around the country must interact with each other on a daily basis. As a result, both civilian and military air traffic controllers use a commonly shared phraseology.

For exclusive military use, there is special use airspace which includes: 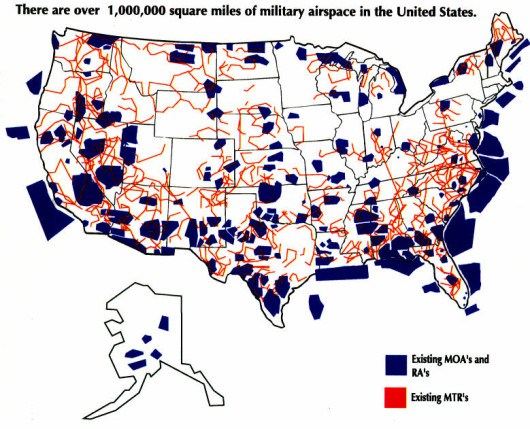 As discussed in this question, supersonic operations in the US are also performed in airspace which belongs exclusively to military.

As Farhan says, peacetime (or non-combat-zone) military traffic may be controlled by civil or military ATC using the same or similar rules as for civil traffic. Military flights might operate in formation (standard or nonstandard) just as civil flights might. Military flights might also operate under Military Assumes Responsibility for Separation of Aircraft (MARSA) rules, meaning two planes that are not a "formation" flight will get closer than usually allowed (for example during aerial refueling or simulated dogfighting), and the military takes responsibility for ensuring they don't crash by training the pilots properly. Special-Use Airspace is set aside for military flights, and MARSA applies to all military aircraft operating within the SUA.

But you asked about combat operations. Generally combatant aircraft will be controlled by "standard" ATC until they get near to the combat zone, where control will be transferred to a dedicated military Command and Control unit such as the USAF's KINGPIN (article 1, article 2) in Afghanistan. Combat-zone ATC may also be provided by individual Combat Controllers who are more similar to infantry soldiers than to radar controllers sitting in a dark room away from the battle.

Not the answer you're looking for? Browse other questions tagged air-traffic-control military or ask your own question.

15
Why are military and civil aircraft landing gear generally so different?
15
What regulations exist for ATC real time RADAR simulator software?
16
How can civil ATC maintain safety with military aircraft around?
3
How similar/different are the roles performed by Military and Civil pilots?
18
Why are military planes painted differently than civil planes?
9
How do civil aircraft flying in formation handle ATC?
4
What is the breakout by service branch for FAA ATC specialists with military backgrounds?
24
Are tower simulators used in civil ATC training?
1
How does ATC radar display differ from military radar?
1
What are the EU-equivalent terms of the FAA ATC tower, TRACON, and center in radio calls?